THE THEORY OF FLIGHT 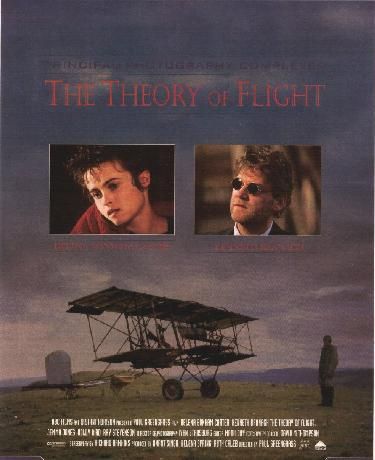 THE THEORY OF FLIGHT stars two intelligent British actors who play a crazy inventor and a woman in a wheelchair whom circumstances bring together. Their story is really about people's need for love, but this R-rated movie cheapens this theme with too much foul language, discussion about trying to lose one's virginity and scenes of implied fornication.

THE THEORY OF FLIGHT is a quirky story about an odd sometime-inventor named Richard, played by Kenneth Branagh, who is fined 120 hours of community service for a wacky stunt he pulls with one of his flying inventions. The court assigns Richard to Jane, a woman dying slowly of Lou Gehrig’s Disease who is played by Helena Bonham Carter.

You can see why Branagh and Carter were attracted to this piece. Both play off-center characters who haven’t been seen before. They do it well, although it is hard at times to understand what Carter’s character is saying because of the way Carter shows how Jane’s speech muscles are affected by this terrible disease.

Richard’s problem in life is his lack of commitment, while Jane’s is the opposite – she wants what she wants more than anything. What she wants is to lose her virginity. This is a pagan stereotype of people in wheelchairs, the movie’s primary immoral conceit, but Carter plays it with charm and bravado. Richard reluctantly agrees to help Jane find a gigolo with whom to fornicate, but Jane wants a man of dreams, someone “like Richard Gere,” which apparently doesn’t come without a heavy price. Thus, while Richard and Jane are themselves falling in love, Richard decides to rob a bank. He would rather rob a bank so Jane can obtain her dream than sleep with her himself, apparently because he “can’t.” The movie never explains why he can’t.

The simple scenes of Richard and Jane getting to know each other, having fun at an amusement park or driving erratically through the countryside, soar. Part of this is due to a warm and wonderful musical score and excellent editing.

The overall story, however, leaves one dissatisfied. The story of a man who is mentally a little strange falling in love with a woman who is only physically handicapped is charming and engaging, but the idea of her doing anything for sex is definitely not as enticing or well-done. In the end, the filmmakers seem to be saying that these two characters help each other fly, but neither character seems to become truly transformed.

Writer Richard Hawkins and director Paul Greengrass fail to explore a deeper, more worthy issue: What is it in people that they will do nearly anything for love? In essence, that’s what both Richard and Jane are doing in their own way. Desiring love is a God-given need inside all humans, but we have warped ways of trying to meet that need. Now, that’s an interesting premise that doesn’t require a lot of profanity and implied sexual scenes to examine!