"Life of a Farm Family" 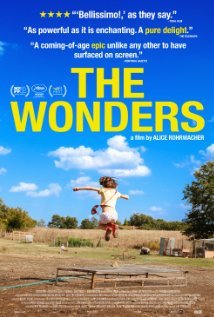 THE WONDERS is an international production about a dysfunctional family of beekeepers living in the Tuscan countryside and working hard to make ends meet with their honey business. The story is told through the eldest daughter, Gelsomina’s, eyes as the camera focuses on her reactions. She stumbles upon a beautiful Reality TV host shooting near her backyard. Also, the family agrees to shelter an orphaned German boy. This exposes Gelsomina to the wonders of the world beyond her family’s farm life. Gelsomina now longs for something beyond what the life that she has, but her loyalty toward her family keeps her from leaving.

(PaPaPa, B, Cap, L, V, S, NN, A, DD, MM) Very strong pagan worldview, with no organized religion, where a family relies on “Mother Earth” for their source of strength, with no mention of God, the Bible or Jesus, with some moral elements where eldest sister shows compassion toward younger sisters and honors her parents and family, although her heart longs for something beyond the family’s mundane farm life, plus some capitalist content; several obscenities, constipated daughter on toilet with pants down; light violence, such as father yells at wife and daughters often, father knocks utensils down in kitchen, father stomps around creating an unsettling atmosphere; husband and wife lay in bed together, husband cuddles with wife on couch, sexual immorality when drunk older woman kisses young boy; visible image of woman’s bare breasts from behind a braless tank top, part of father’s rear end exposed; brief use of alcohol, including family drinks socially to celebrate after a beauty pageant; marijuana smoking in two scenes; and, strong immortality includes dysfunctional family relationships, parents argue in front of children, father verbally abuses wife and children, lying, and greed.

THE WONDERS is an international coming-of-age movie about mixed family living in the Tuscan countryside struggling to make ends meet with their family honey business. THE WONDERS is less of a story and more of an introspective, sometimes surreal take on one dysfunctional family’s way of life, which includes placing value on mother earth and the immaculate goddess-like host of a Reality TV show.

The movie is about a family of beekeepers living in an isolated countryside struggling to make ends meet with a family honey business. The parents, their four young girls and a family friend relentlessly to make ends meet. With shared bedrooms, lack of food and a constantly angry father, it’s clear money is tight. The eldest daughter, Gelsomina, and perhaps the most level headed of the family, feels the pressure to keep things together. When she stumbles on a beautiful TV host dressed as a goddess filming a reality show for a beauty pageant, an idea comes to her. She will compete for the cash prize for her family. She convinces her family to compete in the TV show’s unusual contest set in a nearby cave called “Countryside Wonders.”

In the meantime, the family welcomes a German foster boy in their home in exchange for money. They are warned the boy is impossible to control and is problematic, but they need the money so they take him. As time passes, it’s clear the boy is sweet and feels a sense of peace on the farmland. Gelsomina treats him like a brother, welcoming him into her family. When they aren’t working, they spend their free time away from their father swimming in the lake. Wolfgang, the angry and almost psychotic father, feels the pressure to make money and resorts to taking his anger out on his family. With his harsh verbal abuse, even the mother (who hardly speaks) says, “When he’s not here, we can breathe.”

With the arrival of the German boy and the beauty pageant on the horizon, things are looking up, but life on the farm is never easy. Gelsomina forgets to stop the honey, spilling massive amounts moments before the health inspector arrives who almost shuts down their business due to unsanitary conditions. One sister cuts her hand sharply on a glass jar and is rushed to the hospital while the wacky assistant kisses the little German boy after a few drinks, demonstrating her longing for a male connection.

When the competition starts, the isolated family finally has some hope. During the competition segment, Gelsomina uses her talent of putting bees inside her mouth and having them emerge, further demonstrating her lack of social awareness in her secluded life. Eventually, the loyalty she has for her family triumphs.