"Truth Mixed with an Abhorrent Politically Correct Defense of Islam" 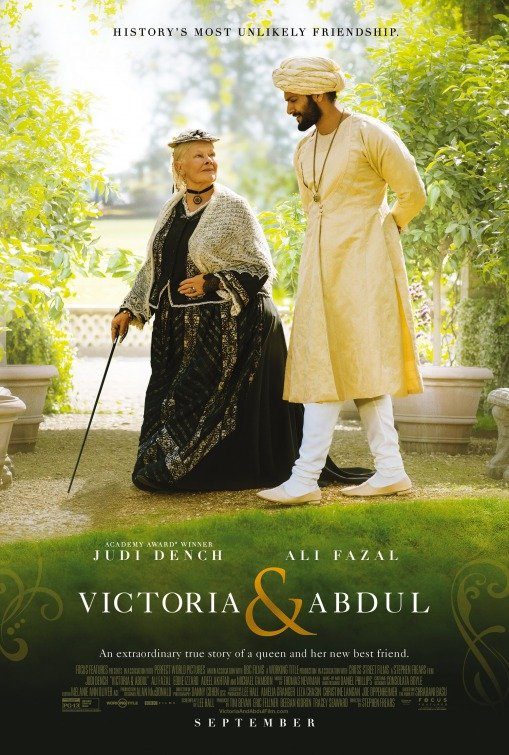 VICTORIA & ABDUL is an anachroniostic movie directed toward modern moviegoers. It supposedly depicts the friendship between Britian’s Queen Victoria and a Muslim from India. Abdul allegedly became the Queen’s most trusted servant in the last 15 years of her life, from 1886 to 1901. The movie correctly claims that Abdul became close friends with Victoria, a friendship that concerned her children, especially her eldest son Edward. Their relationship sparked jealousy among Victoria’s British servants, jealousy which the Queen claimed stemmed from their prejudice against Muslims and people from India.

The production values in VICTORIA & ABDUL are top-notch. Dame Judi Dench gives a phenomenal performance as Victoria. However, the other performances seem superficial. Also, the other characters are cardboard stereotypes. MOVIEGUIDE® surmises this is because the filmmakers seem to be promoting radical leftist multiculturalism. They falsely depict Islam as a “religion of peace and tolerance.” They also depict the British characters as venal racists. In reality, Adbul sometimes did use his friendhip with the Queen to gain influence and material wealth. MOVIEGUIDE® ultimately finds VICTORIA & ABDUL superficial and abhorrent.

(PaPaPa, RoRo, PCPC, FRFRFR, RHRHRH, BB, C, APAP, LLL, V, S, AA, D, MM) Very strong mixed pagan worldview with Romantic viewpoint overall stressing some modern politically correct ideals about multiculturalism that not only promotes Islam as “a religion of peace” but also shows the Muslim servant in the movie seeming to covert England’s Queen Victoria into Islam, combined with some strong moral, slightly redemptive elements attacking racism and promoting truthfulness, charity, service, love, compassion, faithfulness, honesty, and the idea that there’s a greater purpose to life than oneself, plus the movie lays on the “British society is racist” claim a bit too thickly, in a stereotypical manner; at least 20 obscenities, five strong profanities and four light profanities; volence in the movie is minimal though a man gets pushed up against a wall and choked, a family is seen getting thrown out of their home; only sexual content is the mention of a sexually transmitted disease, and the doctor checking the character’s genitalia, though nothing is shown during the check up; no nudity; two scenes depict alcohol use, including one showing a drunken man, and one showing a tipsy Queen Victoria; smoking is portrayed as elegant in one scene; and, Queen Victoria mentions four times her dislike of her children and lack of love for them due to their spoiled and selfish behavior, her son has no respect for her and threatens to clinically call her insane, her son (the heir apparent) lies, and Abdul is accused of lying, racism is the main theme throughout the movie, the Indian/Muslim people are seen in the eyes of everyone, save the Queen, as caricatures and less than a civilized human beings, racist comments and conceptions are in nearly every scene, but racism isn’t glorified.

VICTORIA & ABDUL is a movie directed towards the modern audience about two characters from dichotomous worlds and their unique friendship in a culture that would have them be at odds with one another. It portrays an endearing relationship and deals with the ongoing modern discussion on one’s inherent worth, racism, Islam, and finding one’s purpose in life, but the movie avoids the true answers to all those issues to promite a false, politically correct view of Islam.

The movie opens in India with Abdul Karim (Ali Fazal) praying toward Mecca, though in the background one sees India’s crown jewel, the Taj Mahal. Abdul goes going about his daily routine going to work. Cut to London, England as Queen Victoria (Dame Judy Dench) is awoken and dressed by her servants. The next few minutes are spent back and forth between these seemingly opposite worlds, setting up the dichotomy and conflict that inhabits the rest of the story. How alike are the people who occupy these two vastly different places thousands of miles apart? What is the bridge between difference?

Victoria is in the final years of her life and reign; She is depressed, sultry and lacks patience for her position and those surrounding her. Though she’s the Queen of England, she has no freedom to do what she wants or go where she wills for fear she will be assassinated. She has no reason to live, a common known fact after the death of her husband Albert decades earlier.

Abdul and his friend come into her life after being summoned by her court to present a ceremonial coin to Victoria for her Jubilee year, marking the 50 years of her reign. Victoria takes a keen interest in him and appoints him and his friend as her footmen. With no knowledge of court life, Abdul talks to her about India and his culture while being totally devoted to her, unlike any of her own family members and subjects. He breathes life into what Queen Victoria proclaims is “her prison.”

Eventually, they become steadfast friends. Meanwhile, members of her own family and those in the court, including Victoria’s son, Edward, and the Queen’s white British servants, grow increasing jealous of Abdhul and his close relationship to Victoria. Mistakenly referring to him as “the Indian” or “the Hindu,” they see Abdul as a threat to the realm and their own positions.

Victoria keeps elevating Abdul’s status, which in turn elevates the hatred her family and court have towards him. She even makes Abdul her spiritual teacher. He teachers her how to speak and write in Urdu and about the Qu’ran, the Muslim “holy book” that Abdul has memorized. At one point, Queen Victoria asks Abdul what the point of life is, to which he responds “service.” As their lessons continue and their relationship flourishes, her family begins to plot against Abdul. They organize two failed attempts to make Victoria turn her back on Abdul by calling him a liar and revealing that Abdul seems to have a case of syhphilis. However, Victoria never kicks him out of her court. In fact, she calls Abdul “her son” and prays that she “may enter the banquet hall of eternity,” an alleged reference to heaven as depicted in the Qu’ran and an indication of her potential conversion.

The movie finishes with Abdul’s deportation back to India after Victoria’s death at 81 and the ascension of her son, Edward, to the throne.

VICTORIA & ABDUL, though set over 100 years ago, is designed to portray some of the controversial issues of today’s world. For example, the movie propmotes the idea of accepting and defending other people even though they might be totally different in appearance and cultural values. These differences aren’t merely that Abdul has dark skin, it’s also because he’s a Muslim. Thus, the movie strongly supports Abdul’s Islamic faith and paints it as a faith of peace, service, love, compassion, and dedication (Abdul knows the entire Qu’ran, prays toward Mecca, and his wife and mother-in-law are dressed in full hijabs). In addition, the movie suggests that Victoria and Abdul exhibit what “true love” is, and the selfless service and the strength that comes with love and defending those you love. It also shows Victoria’s court and family are greedy, selfish, manipulative, and even racist, painting them all in a very negative light. Adbul’s friend, Mohammed, exhibits negative, racist thoughts toward the British, but the movie only uses this to affirm what the audience is led to believe about the bigotry of the British. Though the movie suggests that Abdul himself may have been a little greedy and ambitious, the filmmakers abandons this suggestion by the movie’s end.

As Queen Victoria, Dame Judi Dench delivers an absolutely stunning performance that makes one sympathize greatly in her isolation, frustration and then joy of discovering new and different things. The audience feels her shackles and her subsequent freedom. However, she’s the only character who displays enormous depth, and viewers are told exactly why she makes the decisions she does. This is not the case with the other characters, including Abdul. Though the movie comments on a culture of racism seen in England in the late 1800s, the director, writer and actors seem to leave the depth of every other character wanting. Where does their motivation come from? What has made them hate those different from them? Why does Abdul love Victoria as he does? Thus, while the filmmakers create sympathy for Victoria and Abdul and try to reveal the racism allegedly inherent in British society, their depiction of the British people seems like a superficial, overly negative and anachronistic stereotype. Although there are objective moral standards from God and His Word, the Bible, we shuld not judge past societies by modern-day politically correct standards, fads or fashion. The filmmakers behind VICTORIA & ABDUL not only promote a false version of Islam as a “religion of peace and tolerance,” they also seem to be promoting a Romantic, politically correct multiculturalism with radical left (and ultimately godless) origins. In reality, even the book on which the movie is based contends Adbul sometimes did seem to use his friendhip with the Queen to gain influence and material wealth. Maybe part of the jealousy and hatred he encountered stemmed from that problem, not from any inherent racism in Queen Victoria’s family and in her British servants. Also, most if not all of the surviving photos of Abdul and the Queen’s entourage from India shows them dressing in Indian, Muslim garb. At some point, if you decide to live for 15 years in another country, you might want to adopt some of the fashion and customs of that country instead of always appearing in your own native dress.

Finally, the suggestion that Queen Victoria may have converted to Islam because of Abdul is ridiculous. For instance, even in online reviews of the book and stories about their relationship on which this movie is based, it has been noted that, although Victoria studied the Qur’an under Abdul’s guidance, she also gave Abdul a personalized Bible. Apparently, though her son burned most of the letters Victoria and Abdul wrote to one another, some letters survived, as has Queen Victoria’s private journal, which discusses her friendship with Abdul over the years. In researching information online concerning those letters and Queen Victoria’s journal, MOVIEGUIDE® found no contention that Victoria was on the verge of converting to Islam.

All in all, therefore, MOVIEGUIDE® finds that the filmmakers behind VICTORIA & ABDUL seem to have an abhorrent politically correct agenda. Their movie seems to whitewash the Muslim faith while unfairly condemning British society and the British people. Here, the filmmakers seem to be pushing a form of leftist multiculturalism, the kind of multiculturalism that has allowed Islamic terrorists to gain a foothold in Europe and now the United States. Ironically, some leftist film critics have complained that the movie whitewashes the evils of the British Empire and Queen Victoria’s participation in British “imperialism.”

Whatever the case there, another problem with VICTORIA & ABDUL is the amount of foul language within it. The movie has more than 27 obscenities and profanities, an aspect to the movie that seems anachronistic and ahistorical.