YELLOWSTONE: Episode 5.1: “One Hundred Years Is Nothing” 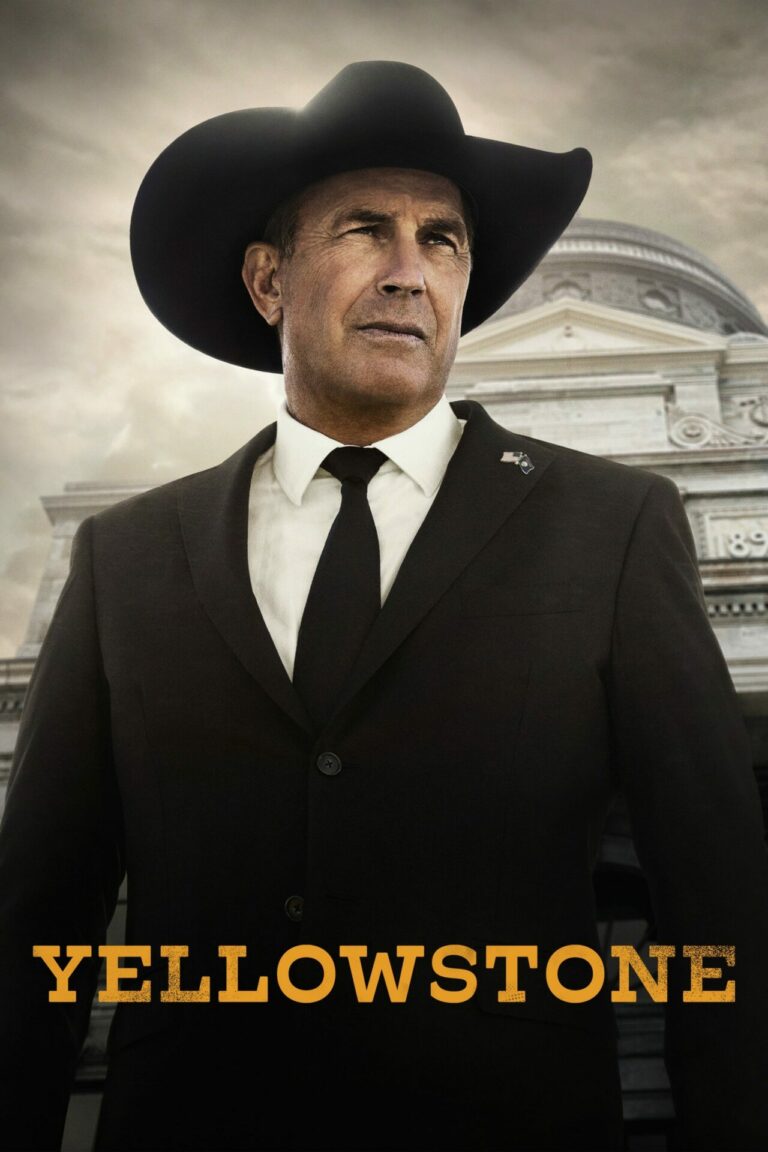 The fifth season of YELLOWSTONE opens strong with John Dutton, the family patriarch, becoming Montana Governor. John speaks for an older, more traditional America with patriotic overtones and state-centric zeal. Family loyalties come to the fore, and John’s son, Kayce, must face a heartbreaking development. Meanwhile, John orders his other two children, Beth and Jamie, to stop bickering. Also, Beth finally demonstrates some real personal growth in a heartfelt apology to Rip for her past actions.

Episode One of YELLOWSTONE’s fifth season has high production values. The writing remains superb. Also, the overall entertainment value has grown with the maturity of the characters and the comfort of the actors in their roles. The first episode of Season Five has a moral, pro-family worldview, with some American, conservative values. The program’s hard-edged humanist overtones are absent, and some characters have become devoted to something other than themselves. However, Episode One of Season Five still has lots of strong foul language. Also, in one of YELLOWSTONE’s many flashbacks, an 18-year-old Beth flashes her cleavage to a bartender to get a martini. MOVIEGUIDE® advises extreme caution.

(BB, PP, AC, AP, PaPa, FR, LLL, V, S, AA, M):
Dominant Worldview and Other Worldview Content/Elements:
Strong moral, pro-family worldview where the family patriarch expresses some Pro-American, conservative values about protecting his state from inconsiderate outsiders and interlopers and admonishes two of his children that the family ranch comes first, some family members gather round one of the male heirs who suffers a family tragedy, and some American police officers (led by the male heir mentioned above) arrest some horse thieves trying to escape by crossing the border into Canada (the male heir defends America’s system of law and order against Canada’s socialist, big government system in one line of dialogue after a Canadian officer makes a snide Anti-American remark), marred by some strong pagan, amoral, immoral, and antinomian, or lawless, behavior
Foul Language:
About 39 obscenities (including about 17 “f” words), and two or three strong Jesus profanities
Violence:
Some pushing and shoving and rough games between ranch-hands, angry woman throws a glass, and there’s an implied car crash between two vehicles, and a buffalo where a mother and young boy are hurt, and an unborn baby dies after being born at the hospital
Sex:
Some light suggestive talk and a flashback shows a young woman about to go to college passionately kissing a man in front of the young man she seems mostly interested in, though he’s rejected her so far because of her loose ways
Nudity:
No explicit nudity, but woman wears an outfit that reveals her cleavage, and a flashback of her just before she’s off to college shows her wearing a short-length thin dress and showing off part of her cleavage to get an underage drink from a bartender at a bar asking for her ID
Alcohol Use:
Adults drink whiskey in one scene, man sips wine in another scene, and an 18-year-old young woman convinces a. bartender to illegal give her a martini
Smoking and/or Drug Use and Abuse:
Woman smokes in two brief scenes, but there are no drug references;
Miscellaneous Immorality:
Deceit, blackmail, revenge, and other things run in the Dutton family, but much of this is not present in this particular episode, which does contain some bitter bickering between two siblings. and an elderly woman and her political son decide to take the gloves off in dealing with their winning political rivals.

John Dutton (played by Kevin Costner) is the formidable patriarch of the Yellowstone Dutton Ranch, also called The Yellowstone, the largest ranch in Montana, and is beset on all sides by environmental, governmental and personal attempts to encroach on his land. Added to this is a human web of fractured family relationships, which is largely a result of his leadership priorities. All these things threatens to destroy John’s vision of a truly free state in a truly free nation. It’s been a long and winding road for John to grasp the power he needs to make his vision a reality, but through his ascension to the seat of Governor of Montana in the first episode of Season Five, he sees his goal is in reach. However, can he navigate the deep and dark waters of his less than upright past and its consequences, his political and personal opponents, and family upheaval to achieve his desired ends?

As John becomes governor at the beginning of the episode, his adopted son, Jamie (We Bentley), bickers with John’s no-nonsense daughter, Beth (Kelley Riley). John orders them to stop bickering, then tells them what really matters. Also, his youngest son, Kayce (Luke Grimes), deals with some horse thieves and a family tragedy. In one scene, Beth shows some very real personal growth in a truly heartfelt apology to her husband, Rip (Cole Hauser).

Ultimately, the whole story seems to be bringing its separate threads together. For example, some seeds of hope, planted in Seasons 3 and 4, are now flourishing in Season 5 so that many characters seem to come out of the darkness of their past. This is most notable in some of the rousing, classically conservative, and moral tone of some of John’s dialogue in this episode. For example, in his acceptance speech at his election victory, he speaks for an older, more traditional America with patriotic overtones, saying:

We have a lot of work to do and a lot of work to undo. What will Montana look like in 100 years? Much of that is dictated by the way the world sees us today. Right now, we are seen as the rich man’s plaything. We are New York’s novelty and California’s toy. Not anymore. You’ve elected me to be a steward of this state, of its land, and of its people, and that’s exactly what I will be. Environmentalists love to debate what is Montana’s most valuable resource. Is it the water? Is it the wolves? Is it the trees? The answer is actually pretty simple: It’s you. The farmers and ranchers that live with the land, not on it. Protecting you now is how Montana still looks like Montana when none of us here tonight are here to see it.

Later, in summing up his political platform at his inauguration, John reinforces the words in his acceptance speech, with a clear states rights and state-focused position. “The message is this,” he tells non-residents. “We are not your playground. We’re not your haven from the pollution and traffic and mismanagement of your home states. This is our home. Perhaps, if you choose to make Montana your home, you will start treating it like a home and not a vacation rental.” This is a conservative message indeed for a present-day America, where socialist policies have caused a mass exodus from states like California and New York to other states.

In another Pro-American scene, John’s youngest son, Kayce, leads some state livestock officers in chasing a group of horse thieves trying to cross the border into Canada. Some Canadian police help a little bit. However, when the lead Canadian officer makes a snide Anti-American comment, Kayce defends America and its liberty-oriented system by casting aspersions on Canada’s big government, socialist system.

The quality of YELLOWSTONE has grown over its several seasons, and its fifth season is pointed and potent. Its high production values and artistic elements have not weakened but grown stronger and its entertainment value has likewise grown with the maturity of its characters and the comfort of actors and actresses in their roles. The writing remains as excellent as ever, and the filmmakers seemed determined to make the series go out with a bang.

Episode One of Season Five has a moral, pro-family worldview, with strong American, conservative values. The episode ends with some family members gathering in a hospital after a tragedy. John comforts his son, grandson and son’s wife. Some of YELLOWSTONE’s hard-edged humanism have disappeared, and many characters have become devoted to something other than themselves. Some characters even admit their faults. For example, in one scene in this episode, John tells his bickering daughter, Beth, and his eldest son, Jamie, “It’d break my wife’s heart to see what a mess I’ve made of this family.” Sometimes, though, the characters mistake the cause and origin of their faults. Also, some, if not many, decisions in the series, are made on selfish grounds. For example, in this episode, John tells Jamie and Beth, “The ranch comes first. We measure every decision by what is good for the ranch.”

Also, there are no references to faith in this episode. In addition, the characters have no problem using foul language. Thus, Episode One of Season Five of YELLOWSTONE has more than 15 “f” words and two strong profanities. Finally, in one of YELLOWSTONE’s many flashbacks, an 18-year-old Beth in this episode flashes her cleavage to a bartender to get a martini.

Overall, therefore, MOVIEGUIDE® advises extreme caution for YELLOWSTONE: Episode 5.1: “One Hundred Years Is Nothing.” YELLOWSTONE would be a much better program if the scriptwriters cleaned up the foul language and inserted some positive, overt Christian values.