"A Promising Series with Some Problems" 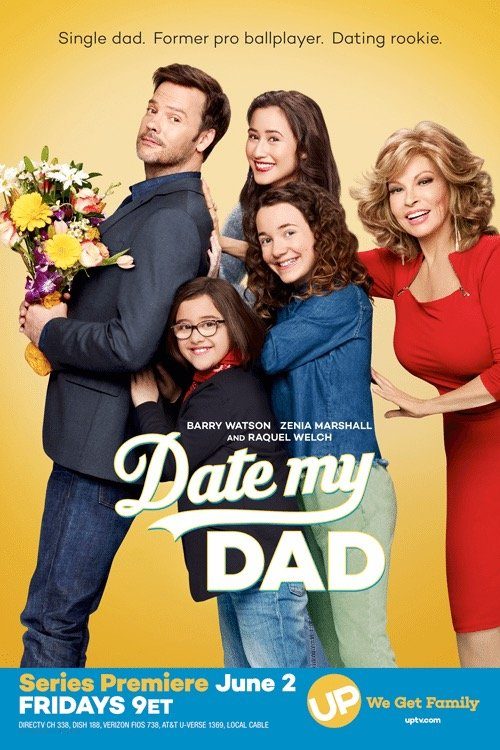 In the new UP TV series, DATE MY DAD, Rick is a former professional baseball player lamenting the fact he’s turning 40. As a widowed single dad of three daughters, with a mother-in-law who lives with them, his hands are full. So, when his daughters have an intervention and say he needs to start dating again, Rick isn’t having any of it. His wife, who died three years prior, was his childhood sweetheart, and he can’t imagine finding anyone else. However, his daughters persist, to the point of crossing the line.

DATE MY DAD has its sweet moments, and the characters are likable. The worldview is mostly positive and moral, stressing the importance of family and fatherhood. However, there are some negative messages. Rick sees the spirit of his dead wife, and talks to her, and there’s too much emphasis on the need to have a romantic partner. Also, there are some implied innuendos that don’t fit a family program like this. In the end, DATE MY DAD is promising and may improve in later episodes, but caution is advised for families.

Content: (BB, RoRo, O, Pa, Acap, S, A, M) Strong moral worldview stresses the importance of the family unit, fatherhood and being a loving family; mitigated by some Romantic elements putting the emphasis and inherent value on finding a romantic partner, as well as some occult paganism in the form of a husband talking to his deceased wife’s spirit, plus light anti-capitalist scene where a police officer shuts down three girls’ lemonade stand for trying to turn it into a dating service as well; no foul language; no violence; no sex, but light innuendos imply sex outside of marriage; no nudity, but older woman wears revealing outfits at times, and shows cleavage; multiple scenes of drinking; no smoking or drugs; and, character says “I hate you” to his brother, some lying is condoned, and some lying isn’t condoned.

In the new UPtv series DATE MY DAD, Ricky is a former professional baseball player lamenting the fact he’s turning 40. As a single dad of three daughters, and the co-owner of a gym with his brother, his hands are full. So, his Latina mother-in-law, Rosa, lives with them. However, she explains to Rick that she needs her own place because of her partying lifestyle.

On his birthday morning, Rick’s three girls Mirabel, Elisa, and Gigi explain to their father that they want him to start dating again. This terrifies Rick, who still can’t move on from the sudden death of his wife Isabella three years prior. To make matters worse, Rick starts seeing the spirit of his dead wife Isabella, and she encourages him to move on as well.

The three girls decide to take matters into their own hands. So, they start a lemonade stand where they offer women the chance to sign up and date their Dad. This infuriates Rick, who truly doesn’t want to start dating, but eventually, he’s won over.

DATE MY DAD has its sweet moments, and the characters are likable. However, the writing suffers from often being on the nose, repetitive and cheesy. The characters are a bit one dimensional as well. That said, the relationship between Rick and his daughters is touching.

The program’s worldview is mostly positive and moral. It stresses the importance of the family unit, fatherhood and a positive portrayal of a family interacting in a healthy way.

There are some issues worth noting, however.

First, Rick interacts with the spirit of his dead wife, whom Rosa explains is only there because Rick needs to change something in his life. This false and unbiblical view of the afterlife stems from occultism and may confuse young viewers.

Also, there’s a bit too much emphasis on the need to find a girlfriend or boyfriend, for both Rick, and his daughters, who discuss the ins and outs of getting a boyfriend. The creators could have helped solve this by stressing that the daughters’ desire for Rick to find a new life partner is less about his need for companionship, and more about their need for a mother. In fact, the pilot episode should have been about the family discovering the need for Rick to enter the dating game, instead of just assuming the audience agrees with the daughters’ plan.

Finally, there are some implied innuendos that don’t fit in a family oriented show like this.

In the end, DATE MY DAD is promising and may improve in later episodes. However, because of the mixed messages, MOVIEGUIDE® advises some caution for families.