"A Near-Genius Look at a Troubled Genius" 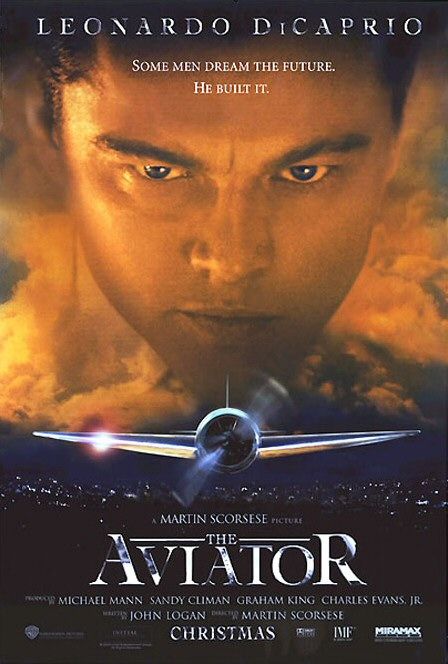 THE AVIATOR, Martin Scorsese’s account of the brilliant, unpredictable Howard Hughes, is an extremely interesting, unorganized look at a troubled genius. Hughes revolutionized air travel, made the most expensive movie of his day, fought a crooked senator’s unfair attacks, and suffered from debilitating mental illness. In the beginning of the movie, he inherits a successful tool company from his father at age 18. Then, his interest in warfare leads him to make an epic movie about fighter pilots. During filming, he stumbles across the idea for a new kind of spy plane, which he attempts to produce for the military. He also buys TWA Airlines and has a string of affairs with starlets, including Katharine Hepburn.

Regrettably, characters take the Lord’s name in vain often in THE AVIATOR. The movie also features an intense airplane crash and light sexual content. Howard Hughes led an interesting and multifaceted life, so it would probably be difficult to make a boring movie about him. Happily, Leonardo DiCaprio does a great job giving Hughes fire and intensity. A lack of structure prevents THE AVIATOR from being a great movie, but fans of biography should really enjoy it.

(Pa, PP, CapCap, LLL, VV, S, N, A, D, MM) Mild amoral worldview in which Howard Hughes sets out for personal glory and success, and he has patriotic and capitalistic aims; 57 obscenities and 53 profanities; man is burned and cut in plane crash, airplane hits houses, man slaps woman, and footage of war violence inside another film; cohabitation, man puts hand on woman’s breast, and man’s sexual indiscretions are alluded to; long instance of male rear and side nudity, plus a woman’s bare back; alcohol; smoking; and, a crooked senator makes false allegations (rebuked), a director adds content to his movie to make it more salacious and shocking, man burns ex-girlfriend’s clothes, cheating in romantic relationships, and man goes insane and keeps his urine in bottles.

THE AVIATOR is Martin Scorsese’s account of the brilliant, unpredictable Howard Hughes. It is an extremely interesting, if unorganized, look at the man who revolutionized air travel, made the most expensive movie of his day, fought a crooked senator’s unfair attacks, and suffered from debilitating paranoia and mental illness all the while.

Inheriting a successful tool company from his father at age 18, Hughes had eccentric plans for his money from the start. His interest in warfare and aviation led him to make HELL’S ANGELS, an epic about fighter pilots in World War I. Originally intended to be a silent film, Hughes changed his mind just before the movie’s release and re-shot most of it to include sound. These loopy decisions become par for the course, but the stakes rise.

Leonardo DiCaprio does a great job giving Hughes his fire and intensity. As Hughes conducts business (he buys a controlling share of TWA Airlines and strives to compete with Pan Am), he also juggles women. His relationship with Katharine Hepburn is presented as his longest and most serious, but after she left him, Hughes pursued a number of young starlets.

As recorded in our CONTENT section, the foul language count for this movie is quite high. The obscenities are relatively light compared to most movies, but there are many strong profanities (taking the Lord’s name in vain). One scene in which an airplane crashes is surprisingly bloody and intense. Also, mild sexual content is depicted, and there are many allusions to the characters’ sexual activities.

Howard Hughes led an incredibly interesting and multifaceted life, so it would probably be difficult to make a boring movie about him. THE AVIATOR captures much of the drama in his story, but it loses some structure and organization in trying to cover so many events. One comment recurred after the preview screening: “It’s all over the place.”

There are also some other small missteps. In the world of abstract art, one commonly held rule states that if an observer has to wonder if some part of the work was done intentionally, then the work is partially ineffective. THE AVIATOR has a bounty of these small moments that make you wonder – wonder if the actor meant to speak that way, if the scene was supposed to be edited like that, if the script intended to be corny for some reason.

Even so, THE AVIATOR is an entertaining, captivating movie. During the nearly three-hour runtime, no parts strike the audience as unnecessary or overlong. Scorsese goes easy on Hughes, gliding over his shortcomings and glorifying him when possible. Some minor bumps prevent it from being a truly great movie, but audiences who like biographies or stories about mavericks overcoming the odds should really enjoy this one.

With the wild Southern accent, a boatload of eccentricities, and a penchant for bravado and forward-thinking ideas, one can’t help but think that combining THE AVIATOR with the 1970s movie NETWORK would yield “The Ted Turner Story.” Maybe we can look forward to that one in another 30 years or so.

Writer: John Logan BASED ON THE NOVEL BY: N/A