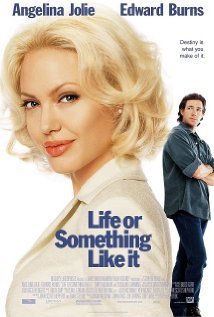 LIFE OR SOMETHING LIKE IT is an entertaining, emotional romantic comedy. Angelina Jolie stars as Lanie Kerrigan, a career-minded TV reporter in Seattle who re-examines her values and priorities when she meets a homeless, crazy-looking seer named Prophet Jack. Jack tells her that she won’t get a coveted network news job because she’s going to die in seven days, on a Thursday to be precise. Lanie begins a roller-coaster ride toward change that includes romantic interludes with Pete, a cameraman with whom she has long been at odds.

LIFE OR SOMETHING LIKE IT has a solid moral worldview with redemptive elements, including positive attitudes toward parenthood, the proper relationship between career and family, and the existence of an afterlife. Prophet Jack also gets his messages from God, although it’s clear he’s not using his talents properly. Angelina Jolie gives an excellent performance. She is helped by many nicely-done scenes with her various co-stars, including veteran pros like Edward Burns, Tony Shalhoub, James Gammon, and Stockard Channing. These things are tarnished, however, by some foul language and implied sexual content. Therefore, MOVIEGUIDE® recommends a strong caution for older children, ages 8 to about 15

(BB, C, Pa, Ro, LL, V, S, N, A, D) Solid moral worldview with redemptive elements and positive scenes between parents and child; movie also says there’s an afterlife and perhaps a God, but is otherwise non-committal; movie also contends that family and personal relationships are more important than having a high-powered career, especially if you have to sacrifice family and personal relationships; positive worldview spoiled, however, by thematic pagan elements treating pre-marital cohabitation and fornication too lightly, but these are brief and not central to the story; slight Romantic attitude seems to mitigate the truth that, without the Grace of God, all people are terrible sinners; 8 obscenities (including one “f” word), 10 light exclamatory profanities, two or three vulgarities, and a few allusions to sexuality (but not really graphic); implied shooting and light physical comedy; implied fornication, passionate kissing and cohabitation before marriage; upper male nudity but no sexual nudity; alcohol use and implied drunkenness; smoking; and, nothing else objectionable.

Lanie Kerrigan almost has it all. She’s got a great job as a lifestyle reporter on one of Seattle’s premier TV stations. She’s engaged to be married to the star player on the Seattle Mariners baseball team. Best of all, her boss has just informed her that she’s up for a job at the national network’s popular AM USA show in New York City.

Lanie’s perfect world starts to unravel, however, when her boss teams her up again with Pete, a handsome cameraman. Pete gave up being a national news cameraman in New York for a more quiet, but rambunctious, lifestyle in Seattle. Lanie has long been at odds with Pete, based on a previous job experience with him and, we learn later, a passionate one-night stand.

Pete and Lanie trade barbs as they start covering a series of stories. In quick order, however, they start to do a short story on Prophet Jack, a homeless, loony street seer. They want to get some predictions from Jack about the Mariners and anything else upon which Jack wants to opine. Prophet Jack claims to get all his predictions straight from the Man Upstairs Himself, and, hence, all his predictions come true. Although some of Prophet Jack’s predictions are symbolic riddles that must be unscrambled to be understood, Jack’s personal prediction to Lanie is clear. He tells her that her life is meaningless and that she won’t get the new network job she wants because she will die within a week, on Thursday, to be precise. When Jack’s other strange predictions about the Mariners and the weather come true, Lanie begins to re-examine her values and priorities, all within a brief, comical spasm of several days. She also begins to fall for Pete, whose concern for her begins to leak through Lanie’s thick, beautifully coiffed skull.

LIFE OR SOMETHING LIKE IT is a marvelous romantic comedy that, despite some moral problems and theological timidity, is emotionally satisfying, funny and morally uplifting. Although it is not as highly profound, challenging and entertaining as Bill Murray’s GROUNDHOG DAY (the best romantic comedy, entertainment wise, in the last 15 years – though some people might say it suffers from a nominalistic plot device), it may remind moviegoers of that movie. LIFE OR SOMETHING LIKE IT has a positive charm all its own, however.

Angelina Jolie (LARA CROFT: TOMB RAIDER) is perfectly cast as the career-minded, beautiful Lanie. Her scenes with Edward Burns, also perfectly cast as Pete, have a convincing electricity and warmth. Her scenes with her father, played wonderfully by underrated character actor James Gammon (of MAJOR LEAGUE and TV’s NASH BRIDGES), are poignant and, eventually, very heartwarming. Her scenes with her caustic, unhappy sister, Gwen (Lisa Thornhill), have the right amount of bittersweet acerbity, regret and pain. Her scenes with Prophet Jack, played by the multi-talented Tony Shalhoub (GALAXY QUEST and THE MAN WHO WASN’T THERE) have the right amount of quirky profundity. Finally, her scene with Stockard Channing as Lanie’s idol with feet of clay, a Barbara Walters archetype, add just the right finishing touches to the clever, deliciously structured script by John Scott Shepherd and Dana Stevens. Director Stephen Herek (THE MIGHTY DUCKS, MR. HOLLAND’S OPUS, 101 DALMATIANS, and BILL AND TED’S EXCELLENT ADVENTURE) adds his usual professional touch as he brings to life these elements, and more, from the script.

All of the performances and story elements come together in LIFE OR SOMETHING LIKE IT when Lanie discovers the truth about her relationship with her father, the truth about her career goals (including her idol) and the truth about why Pete has decided to let go of the high life in New York for a quiet but fulfilling life in Seattle. Best of all, perhaps, the movie not only contains a couple positive, heartwarming scenes between Lanie and her parents, it also strongly suggests that family and personal relationships are more important than having a high-powered career, especially if you have to sacrifice family and personal relationships for such a career.

One politically correct reviewer at a major daily newspaper in Los Angeles complained that the movie here was being too old-fashioned and too sexist. Being old fashioned may be a crime in the eyes of the radical religious left running what passes for journalism in America and Europe, but it’s not a crime in the eyes of God, nor should it be a crime when it comes to reviewing movies for a living. In fact, quite often, being old fashioned is a cinematic virtue of the highest kind. Why else do people still love classic movies like Frank Capra’s IT’S A WONDERFUL LIFE or John Ford’s THE QUIET MAN? As for being “sexist,” at no point and no time did this movie ever suggest that women are inferior beings who should totally give up their careers so they could be utterly dependant on, and submissive and subservient to, their husbands or their male children. As with most, if not all, secular critics, especially those at major newspapers, the reviewer in Los Angeles, the City of Angles (sic), clearly has little or no moral or political discernment.

In one sense, Lanie in LIFE OR SOMETHING LIKE IT is an archetypal mythic heroine who encounters a strange vision of spiritual transcendence (the allegedly divinely-inspired prophecies of a crazy-looking, crazy-acting homeless person, Prophet Jack). Her encounter with this vision of her own physical mortality and her own psychological inadequacy leads her on a heroic journey of self-discovery.

Surprisingly, Prophet Jack does indeed seem to have some kind of prophecy pipeline to God, but the movie also suggests that he’s wasting his talent, which should be redirected to helping people gain more knowledge about God’s purpose for their life. The filmmakers also have decided to suggest, ever so slightly, that there is indeed some kind of afterlife waiting for Lanie, but they don’t go into any details about what that afterlife entails or to Whom it may direct us. This theological timidity may suggest an underlying Theophobia or Christophobia (an irrational fear of God or Jesus Christ), but it also could suggest that the filmmakers would just rather not risk offending any moviegoers who have a firmly established theology or religious viewpoint. Jesus says, however, “Whoever acknowledges me before men, the Son of Man (Jesus) will also acknowledge him before the angels of God” (Luke 12:8, NIV).

More bothersome than this, perhaps, is the implied sexual immorality in LIFE OR SOMETHING LIKE IT. Lanie lives with her fiance, the ballplayer, in the story. The story also implies that she and Pete sleep together after she decides to break up with her groom-to-be. The movie also contains some sporadic foul language. These offensive elements are not central to the main story, but MOVIEGUIDE® nevertheless advises parents to keep their younger children at home. MOVIEGUIDE® also gives a strong caution for parents of children aged 8 to 15.