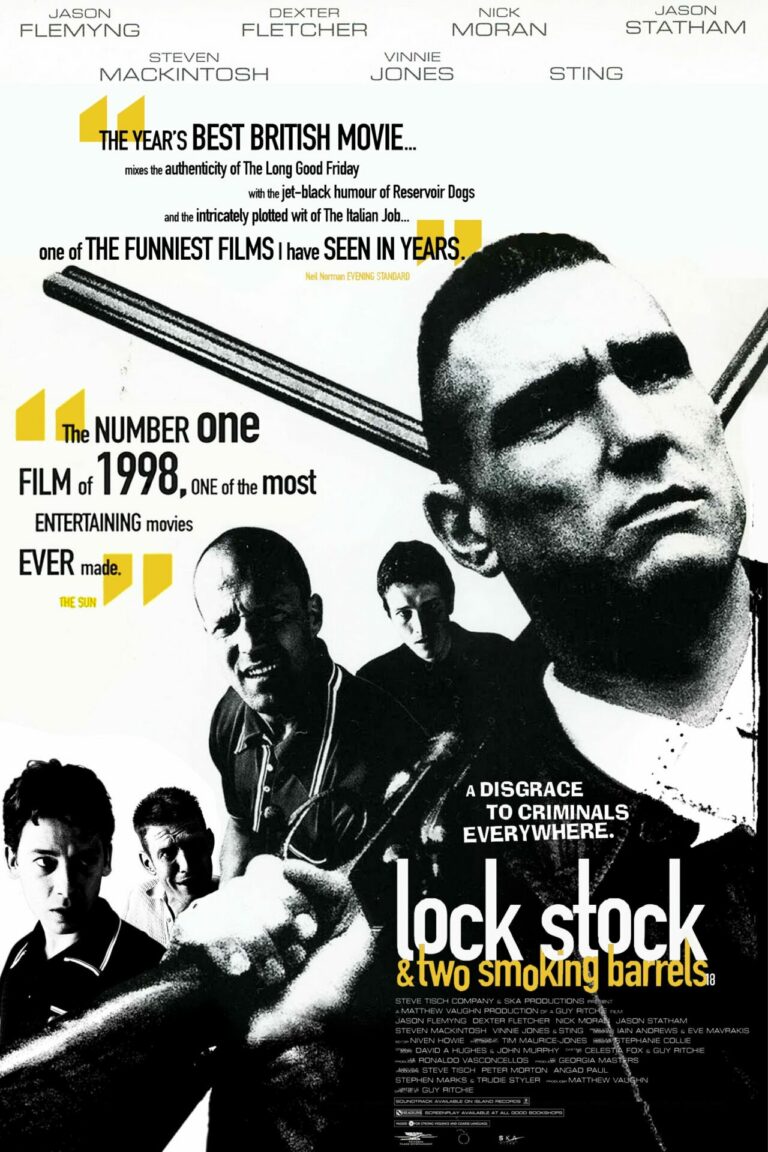 The English have created their own PULP FICTION with LOCK, STOCK AND TWO SMOKING BARRELS. Eddie and his buddies must pay off a debt to a crime boss, or Eddie will lose his fingers. Filled with crime, drugs, shootings, murder, sex shops, and more, this twisted, convoluted, crazy plot of a story only has a glimmer of morality in showing that the wages of sin is death.

The English didn’t quite do it with TRAINSPOTTING, but now, for better or worse, and probably worse, they have created their own PULP FICTION with LOCK, STOCK AND TWO SMOKING BARRELS. Filled with crime (including actual criminals in some roles), drugs, shootings, murder, sex shops, and more, this twisted, convoluted, crazy plot of a story only has a glimmer of morality in showing that the wages of sin is death.

All actors are unknown in America except for rock-musician Sting, who plays a small role. A card shark named Eddie (Nick Moran) leads a group of small-time twenty-something crooks. They hope to score big at a card game that Eddie can’t lose ( but he does lose, because the game is a set-up. Now, Eddie must come up with 500,000 pounds to pay underworld boss and sex shop owner Hatchet Harry (P.H. Moriarty) in one week, or Eddie starts to lose fingers.

To pay back the money, Eddie and his cronies plan a heist of drug money, but, in the process, the marijuana growers, a drug dealer, two hapless gun thieves, and other tawdry sorts end up in repeated gunfights, all based on misunderstandings. Bodies pile up, the worst criminals are killed off, and Eddie and his friends learn to live clean or face a whole lot of trouble.

LOCK, STOCK AND TWO SMOKING BARRELS punctuates its art house aspirations by including all sorts of stylized photography including freeze-frames and fish-eye lensed shots. Some of the violence is implied such as watching windows being blown out while the sound of gunfire is heard, but most of it is depicted. The crime boss, drug dealers and drug sellers all get the most severe punishment for their crimes. Other thugs get arrested or are plagued with other troublesome situations.

This movie could have been salvaged morally by practicing more restraint in its violence, but some of the sex shop images are quite loathsome, and the foul language is rampant. Of course, crime isn’t pretty, and revenge is even more unsettling, but unpredictable plot twists and ultimate justice on the sinners doesn’t justify the unsettling, gross and immoral scenes which plague this movie throughout. TRAINSPOTTING and PULP FICTION fans probably will appreciate LOCK, STOCK AND TWO SMOKING BARRELS, but the casual moviegoer, and certainly the discerning Christian moviegoer, most likely will find this movie too shocking and despicable to bear.