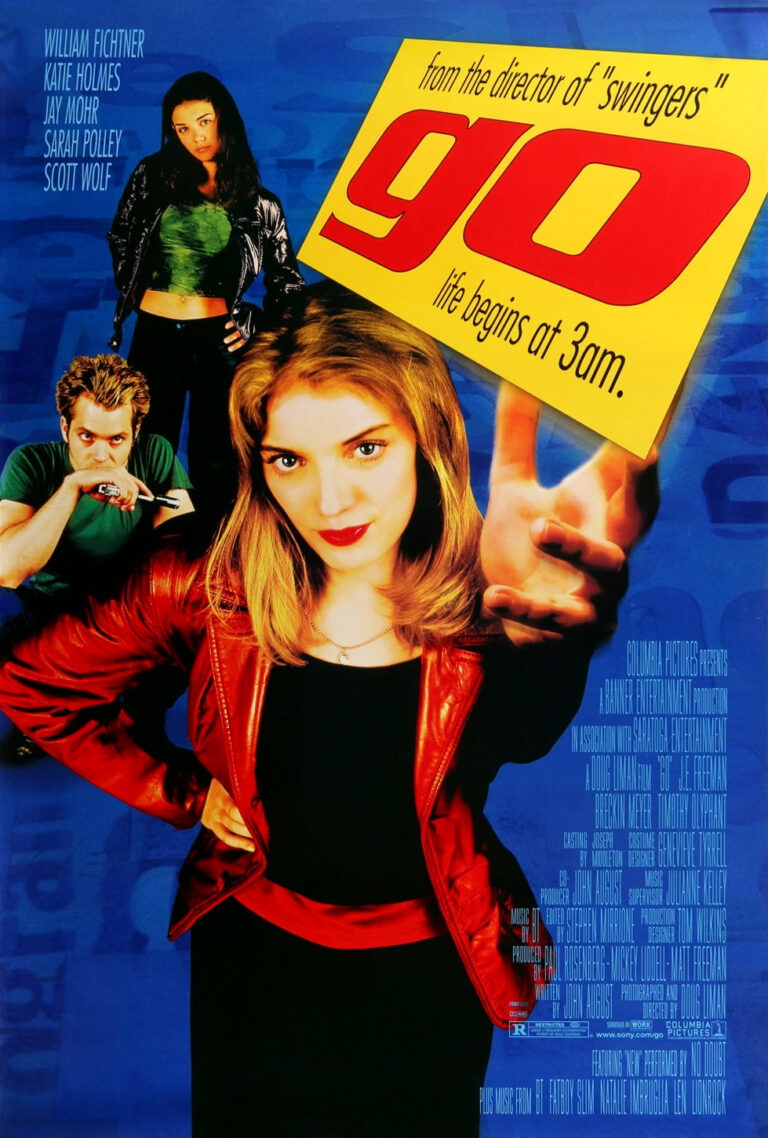 Director Doug Liman follows up his crazy and comparatively tame SWINGERS to a raunchy comedy called GO. Structurally, the movie sets up a group of youthful, sinful characters and follows them down their respective paths until they all meet up again at the end of the story. Heavy drug use, drug sales, sexual situations, and foul language pepper the story.

Proving himself unexpectedly to be a party boy/bad boy director, Doug Liman follows up his crazy and comparatively tame SWINGERS with a raunchy, drug-filled, crime-filled PULP FICTION-style comedy called GO. Featuring an ensemble cast including TV stars Scott Wolf from PARTY OF FIVE and Katie Holmes of DAWSON’S CREEK, this movie follows the misadventures of a troop of desperate youths over a 24-hour period in LA and Las Vegas. Structurally, the movie sets up a group of characters and, in separate stories, follows them in three distinct parties down their respective paths over the same time period, until they all meet up again at the end of the movie.

The first story is called Ronna. Ronna (Sarah Polley from THE SWEET HEREAFTER) is a supermarket clerk facing eviction on Christmas Eve. She must raise $380 for rent, so she attempts to broker her first drug deal, filling in for her co-worker Simon (Desmond Askew), who is off to Vegas with friends. After scoring 20 hits of Ecstasy from Simon’s dealer Todd Gaines (Timony Olyphant), she attempts to sell it for a profit to Adam (Scott Wolf) and Zack (Jay Mohr). But, complications arise, including a botched sale and the presence of her buddy Claire (Katie Holmes), who is left as human collateral at Todd’s apartment.

The second story is called Simon. Simon goes to Vegas with three of his buddies. One of them is sidelined with food poisoning, so Simon and the ever-rational Marcus (Taye Diggs) decide to go out alone and stir up some fun. Soon, Simon is facing arson and grand theft auto charges as he and Marcus receive a lap dance at a local strip club. When Simon touches one of the girls, he accidentally shoots the bouncer and what follows is a car chase throughout the city.

The final story is Adam and Zack. These two hapless soap opera actors are actually working for a creepy detective named Burke (William Fichtner). The two will have their own drug possession charges dropped if they let themselves be wired for the bust involving Ronna. Zack warns Ronna of the bust, so Ronna dumps the drugs in the toilet. Adam and Zack go to Burke’s home for a bizarre Christmas Eve celebration, where they receive an unexpected proposition, and finally end up at a party where they accidentally hit a woman with their car. All parties and persons involved end up in a crazy climax of drugs, vengeance and digging out of trouble.

Structurally, GO is as fine or better than the much-lauded PULP FICTION. GO is even better, technically, than the recently praised LOCK, STOCK AND TWO SMOKING BARRELS. Each story is intricately intertwined, yet every telling has its own surprises and contains an overall narrative that loops back on itself. The writing here is clever, and characters are well drawn, so this movie is bound to have a popular cult following.

Morally, however, this movie is a mess, despite the relative innocence of some of the players. The audience is never told why Ronna doesn’t have the money for her rent, but her thieving and drug dealing ways are new for her. Yet, it is well established that Adam and Zack are drug users, and Simon is a complete reprobate. Simon has group sex, steals cars and isn’t afraid to use a gun on somebody. Likewise, his buddy Marcus explains wild sexual techniques. Throughout the whole movie, Ronna’s buddy Mannie is tripping on acid. Eventually, her friend Claire begins to fornicate with Todd, though she initially guards herself against any sexual activity. Particularly nasty is the prolonged and hyper-sexual lap dance that Simon and Marcus receive. Throughout it all, director Liman justifies these depictions by saying he isn’t advocating questionable activities, but merely the spirit behind them. It is hard to accept this justification.

GO seemingly has no theme or message. It is just amoral and immoral people getting into trouble and trying to find a way out of their predicaments. Perhaps part of the attraction is to see some dolt do some stupid crime and watch him squirm. Indeed, most of the characters find that their wild abandonment yields trouble. Hence, the movie isn’t completely evil because it does show the wages of folly, but part of a seemingly very dangerous trend in youth movies, GO revels in depravity more deeply than its historical precedents.