"Troubles in the Heartland" 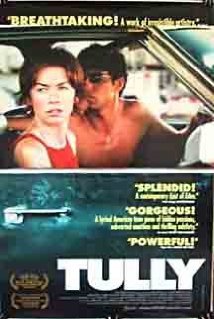 TULLY is the name of a young man living on a Nebraska farm with his brother and father. Accustomed to using people and leaving, Tully must face the possibility that his own life may be the result of that same emotional disregard and callous behavior. His father, after all, has been a mess since the loss of his wife 15 years earlier. His brother, more sensitive and compliant, just wants to hold their struggling family together. And, his new friend, Ella, begins a touching friendship that expects more from Tully’s well-known bad boy reputation.

Adult viewers may appreciate TULLY’s focus on the importance of family, friendships and the enjoyment of life’s simple pleasures. It is intricate and insightful, tragic and touching. Regrettably, however, the characters too often retreat to vice instead of faith. They drink way too much beer and pre-marital sex is jarringly portrayed. Though packed with credible characters, some positive family values and a powerful story, Christians will especially be disappointed with TULLY’s oft-repeated blasphemies and lack of spiritual mooring. Nevertheless, TULLY is one of the most vivid and tender stories for adults that they are likely to see in today’s movies

(PaPa, RoRo, BB, LLL, V, SS, N, AAA, D, M) Eclectic pagan worldview with Romantic and moral elements, wherein a Nebraska farming family comes to terms with secrets buried deep in the past, and father expresses love and pride in his sons, as well as romantic love, commitment and forgiveness are shown as virtuous but the absence of faith in God detracts from the movie’s warmhearted sentiments; 28 obscenities (including 11 “f” words) and nine blasphemies; fighting in bar, man hit in eye by small rock, man dies in farming accident (no blood shown), and it may have been a suicide; several scenes of implied fornication, couple lies under a blanket, young man buys boxes of condoms, talk of sexual conquests, lover’s jealousy, woman rebukes idea that couple must have sex to be friends, older woman rebukes man for dating women for sexual partners, father expresses outrage at son’s friend who is a stripper; girl shown briefly in underwear, some cleavage, and upper male nudity; lots of drinking and visits to bar; smoking; and, stealing rebuked, lying, betrayal, vandalism, abandonment, joke made that suggests shoplifting as a hobby, and mother is called a slut which results in brothers fighting in bar.

TULLY is the first name of a young man living on a Nebraska farm with his brother and father. Anson Mount turns in an acceptable performance as the main character, but it is Bob Burrus as his father, Tully Sr., and Julianne Nicholson as neighbor Ella who steal scenes and your heart as this drama unfolds.

Tully is the rebellious older son who seems to be more cut out for city living than running the family farm. Accustomed to using people and then leaving, Tully must face the possibility that his own life may be the result of that same emotional disregard and callous behavior. His father, after all, has been a mess since the loss of his wife 15 years earlier. His brother, more sensitive and compliant, just wants to hold their struggling family together. And, his new friend, Ella, begins a touching friendship that expects more from Tully’s well-known bad boy reputation. Nicholson’s “girl next door” is so sweet and charming, viewers will almost wish this movie was titled ELLA instead of TULLY.

As the story opens, Tully Sr. receives notice of the farm’s foreclosure, but that is where the formulaic plot similarities end. In fact, this movie hearkens back to simpler times and deeper themes. TULLY is the kind of movie that dares to have a young couple sitting and talking on the hood of a car, enjoy a walk through a junkyard, share french fries on a summer afternoon, or open a gift wrapped simply in crumpled foil. Tender scenes such as these ease the dramatic blows that Tully’s family will soon weather. It is indeed one of those rare movies that makes you appreciate the importance of family, friendships and the enjoyment of simple pleasures in life. Surely, the story’s slow and steady pace is the product of passion not ineptitude, with a result that is intricate, insightful, tragic, and touching.

TULLY is a gentle cinematic masterpiece that continues to work its way into your heart days after you have seen it. In the end, it seems to become much more than a family facing adversity, more than a collection of frail and flawed people making choices. It yearns to validate the importance of core values in the human struggle. It desires to make things right, but fails as human weakness does when operating on its own.

TULLY may be one of the best stories this year about the human condition: the ability to love in deep and profound ways, and the capacity to fail while trying to fix the problems of life.

Despite its strong family messages, the characters of TULLY too often retreat to vice instead of faith. The men drink so much beer that viewers may wonder how they plow their crop lines so straight. Also, pre-marital sex is jarringly portrayed as casual and commonplace, even in this small conservative farming community. This modern tale still manages to impart family values but, regrettably, wholly overlooks the necessity of faith. Though packed with credible characters and a powerful storyline, Christians will especially be disappointed with TULLY’s oft-repeated blasphemies and lack of spiritual mooring.

When reminded of its flaws, TULLY feels like a country western song that extols the virtue of family and friends but still leaves you feeling empty. Nevertheless, TULLY is one of the most vivid and tender stories you are likely to see in modern cinema.