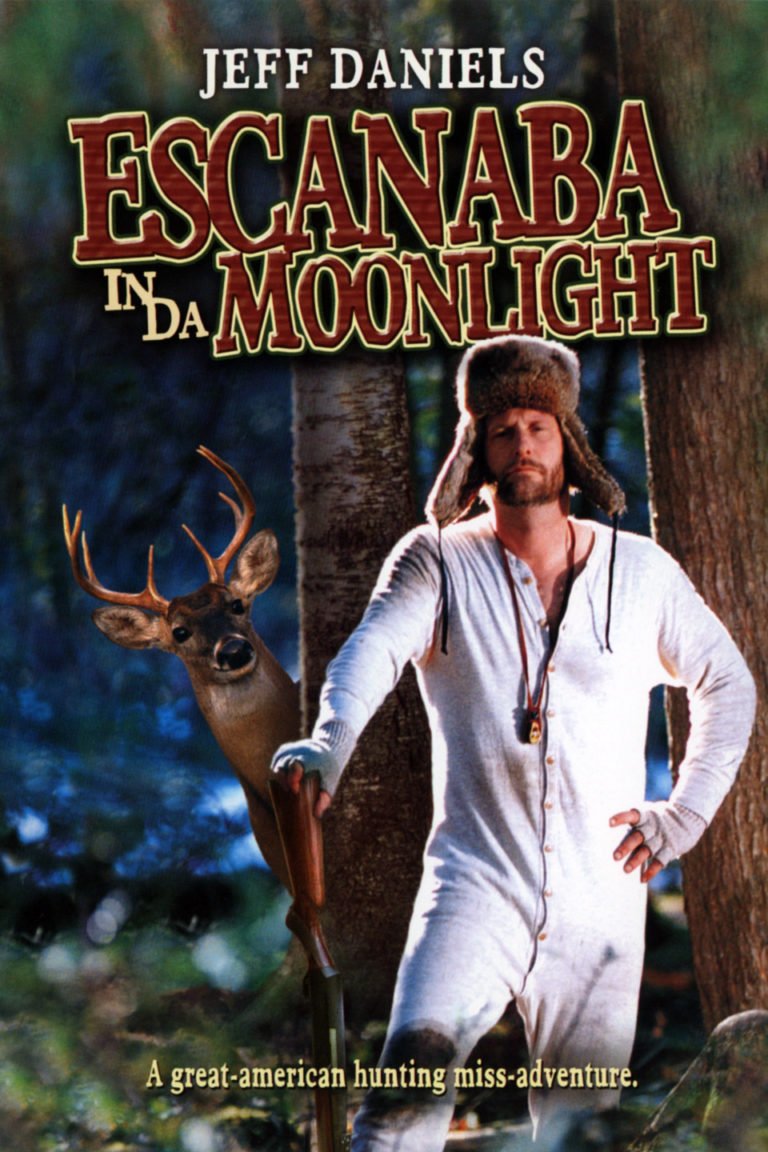 ESCANABA IN DA MOONLIGHT is a movie version of a play by actor Jeff Daniels, known for 101 DALMATIANS. A Michigan native, Daniels plays Reuben Soady, a 43-year-old deer hunter in Northern Michigan who has never shot a deer. Determined to succeed, Reuben breaks drinks a nasty Native American potion, accepts a prayer his wife offers, and sprinkles himself with nasty smells to mask his own scent. Complications ensue from a strange wildlife ranger, a possible encounter with God and threats of a mythical beast. While motivated by his own courage, Reuben gets a little help from his grandfather’s ghost.

Like some of the David Mamet movies based on his plays, this movie seems a little stagy. Yet, the acting, photography and editing are all superb. Regrettably, the movie is too mystical for most Christians and flirts with the occult despite a moral resolution. While many regions in America have their myths and legends, this movie places large credence in those myths, creating a lengthy scene which focuses on spirit possession. Thankfully, these spirits do not triumph, and personal courage overcomes the foes of fear and failure. There is also some scatological humor

(O, B, C, Ab, FR, LL, S, A, D, M) Very mild occult worldview with moral theme of going from fear & superstition to courage & action as well as some mild Christian elements of prayer, church attendance, singing “Sweet Chariot,” & wearing a cross, & many anti-biblical false religious elements including belief in superstitions, nondescript Indian prayer to unspecified deity & occult elements of possession by a mythical beast & guidance by a ghost; 3 mild obscenities, 5 profanities & 20 vulgarities; no violence; no sex but a sexual game played between men & women with toilet rolls & pool cues; no nudity; alcohol use; smoking; and, lots of scatological humor.

Actor Jeff Daniels, known for his work in DUMB AND DUMBER, 101 DALMATIONS and FLY AWAY HOME, is a native of Michigan, and owns a theater in Chelsea, Mich. called “The Purple Rose.” It is named after a movie he starred in directed by Woody Allen, THE PURPLE ROSE OF CAIRO. In 1996, he opened the theater with a stage play he wrote and directed, called ESCANABA IN DA MOONLIGHT. The play, about a failed deer hunter from the Upper Peninsula of Michigan, won rave reviews, still frequently plays there and has also branched out to other stages across Michigan and even Sacramento, Calif. In 1996, Northern Michigan filmmaker Rich Brauer, after having seen the play, recommended that Daniels translate the play into a movie for the big screen. With visions of starting a Michigan based film company, Daniels agreed, scouted locations throughout the state, even considered Canadian locations, and settled on filming entirely in Escanaba, Mich.

Daniels plays Reuben Soady, a 43-year-old deer hunter who has never shot a deer. So distraught by this fact, he is ridiculed around the town by strangers who call him “buckless.” Determined to succeed, Reuben is sent off to deer camp by his loving Native American wife who holds up a beaded leather necklace, prays a prayer in an Indian tongue to an unidentified deity and gives Reuben the necklace for good luck. At camp, his father, played by actor Harve Presnell from THE LEGEND OF BAGGER VANCE, and brother Remnar, both accomplished hunters, don’t want to be jinxed by Reuben’s bad luck and don’t want to be near him in the woods.

Bad omens continue to surface when the Chevy of another hunting buddy, Jimmer, bursts into flames on the way to camp. Nevertheless, for success, Reuben breaks deer camp tradition, drinks a nasty Native American potion his wife whips up and sprinkles himself with porcupine urine to mask his own scent.

The night before opening morning, the boys see strange lights, thinking it is a UFO. They also receive a visit from a very odd DNR (Department of Natural Resources) officer, who claims to have seen God (a bright light) on their property. The DNR officer sings “Swing Low, Sweet Chariot,” and Remnar prays to Virgin Mary when the lights appear again. Then, several of the camp members seem to become possessed by the spirit of a mythical beast said to dwell in that region. To wake Reuben out of such a spell, they position him strategically to get a whiff of Jimmer’s wind. Awakened, Reuben rallies himself and runs out into the woods, ready to shoot his deer. While mainly motivated by his own courage, Reuben finally gets a little help when the ghost of his grandfather shows up to give a little more advice.

This movie, like some of the early David Mamet movies based on his plays, seems a little stagy, constrained and dialogue intensive. A great deal of the action takes place all within the walls of the deer camp. Also, while Daniels is clearly an accomplished actor and has a keen awareness of Northern Michigan ways, his direction is bound to the close-quartered action he has limited himself to in the story. The acting and performances are all on target, however, except the DNR officer, who seems a little too fey and forced to be a genuine Michigan character. The photography and editing are superb given the limitations of the locations and action.

ESCANABA IN DA MOONLIGHT is also a little too mystical for many Christians, and flirts with the occult even with its moral ending. While many regions in America have their myths and legends, this movie places large credence in those myths, creating a lengthy scene which focuses on spirit possession. Thankfully, these spirits do not triumph, and personal courage overcomes the foes of fear and failure. Furthermore, a nondescript prayer may ultimately be Reuben’s reason for success, despite the appearance of the spirit of Reuben’s deceased grandpa offering help. This mish-mash of spirituality must be watched with caution and discernment. Other points to watch out for are several instances of scatological humor.

Like some of the Christian movies of late such as LEFT BEHIND and THE OMEGA CODE, one of the best things that can be said about ESCANABA IN DA MOONLIGHT is that it is representing a region or people group that has previously been ignored in Hollywood feature films. Because there are many hunters in Michigan and the Great Lakes Region, this movie is a welcome niche to those who don’t feel like they have a movie of their own. Michigan citizens themselves take great pride in the beauty of their state that is primarily known for the Detroit area, but is, indeed, so much more. Michigan, as all states, deserves films showcasing the best they have to offer. ESCANABA IN DA MOONLIGHT valiantly attempts such goals, but really simply paves the way for greater things to come.