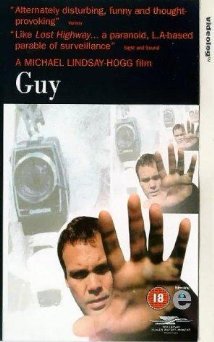 GUY tells what happens when a typical young single guy, named Guy (Vincent D'Onofrio), is pursued by an anonymous young woman, who wants to shoot a "documentary" of an ordinary man's life. GUY begins when a woman's voice, Camera, records a date, and the camera depicts a tall, gangling, 34-year-old man as he walks down a Los Angeles street. Camera begins following Guy around without his permission. Camera has chosen Guy as a subject for a movie about men in their daily lives. For some reason, maybe because he is intrigued by being biographed on film, Guy agrees to let her follow him, ultimately permitting her to intrude into his sexual relationship with his girlfriend, who kicks out Guy and Camera as perverts.

GUY follows this mainstream fellow into the depths of humiliation and degradation. Depths to which Guy drives himself in order to win the affection and admiration of this detached, non-communicative camera woman. In GUY, two lost people reach out for love and immortality through filming and being filmed. With R-rated depictions of shady deals and fornication, GUY is a morality tale which forces viewers to assess the degree to which the camera is responsible for the moral choices made by those in the camera's viewfinder.

GUY begins when an anonymous woman’s voice records a date in a private voice diary, “Guy, April 10th, 1995,” and the camera depicts a tall, gangling, 34-year-old man as he walks down an Los Angeles street. At first, her subject doesn’t notice her, but as she catches up to him, he notices and asks: “What’re you doing? What do you want?” Never giving her name or much other information about her background, credentials or purposes, this woman (called Camera by the screenwriter and, in the very few actual shots of her, given voice and dimension by Hope Davis) begins following Guy around without his permission.

Her disembodied voice doesn’t explain much, but it seems she has researched the subject and chosen Guy as a good subject for a movie about men in their daily lives. She doesn’t know how long she will film him, nor exactly how she will approach the final editing of the movie, but she is sure that when she has enough film of Guy, she will “just know.”

Naturally, Guy tries to dismiss her ( repeatedly; but, Camera won’t be deterred, actually picking a lock to follow Guy into his house in the Hollywood Hills. For some reason, whether because he’s attracted to (the woman behind the) Camera or because he’s intrigued by the concept of being biographed on film, Guy eventually lets Camera film him reading a contract in which he agrees to let her follow him.

However, he has no idea just how far she wants to follow him. She intrudes into a confrontational street meeting with Guy’s shady boss, Al (Richard Portnow), and with a suspicious hot-rodder who exhibits interest in selling his “hot” car to Guy’s and Al’s business. She also intrudes into the bathroom to shoot Guy’s face as he uses the toilet. She follows him into his bedroom to shoot him sleeping and to film his stuff, and into his girlfriend Veronica’s (Kimber Riddle’s) bedroom, to film Guy and Veronica having rather mechanical sex. That intrusion alienates Veronica, who kicks out Guy and Camera as perverts, so Camera films the now-girlfriendless Guy in the street.

In GUY, Camera follows Guy everywhere, causing deleterious effects on his once stable life. Because of her, Guy loses sales contracts, a business partner, two lovers, his borrowed lodgings, his car, and most of his minimal moral restraints. In a gripping performance by D’Onofrio, Guy keeps going along with it, so caught up is he in the myth that being filmed means being protected and immortalized. Despite all the losses from his previously comfortable life, Guy tells Camera that he has never felt so safe and sane as since she started shooting him.

However, Guy clearly wants more from their strangely symbiotic relationship: he wants her to drop the camera and become his lover. She now “knows” him better than anyone else in his life, and he wants to make it mutual. Camera, for her part, gives ample signs that she wants more, too: her dogged pursuit of Guy; her continuing requests to see him in more-intimate settings; and, her neglect of other significant relationships in order to keep pursuing their “very special” project.

Yet repeatedly, Camera rejects Guy’s attempts to “know” her, saying that she wants to “just keep watching and listening” ( no matter how vulnerable he is to her, no matter how much he sacrifices so she can keep filming him. So finally, very believably, Guy reaches the point where he can no longer stand to be only the followed, the observed, “the subject.” He swims out into the ocean, not to be seen again ( at least not by us. The intriguing ending shows that perhaps the observed has gotten on the other side of the camera to become the observer, leaving Camera to reconsider what she has done.

Generally, GUY takes the Romantic view that Guy is a fairly noble individual who shows respect for other humans. However, Guy definitely uses a sliding scale to determine how much respect. For example, he is much more respectful to the detached Camera than he is to his too-trusting girlfriend, Veronica. Director Lindsay-Hogg seems to portray the camera as a metaphor for God. However, where the ever-watching eye of God should lead people to more moral behavior, in GUY, Camera’s ever-watching eye seems to encourage Guy into less-moral, less-responsible, more risqué behavior. Rather than strengthening his discipline and moral resolve, she weakens it in order to feed her celluloid appetite on his vulnerability and weakness under pressure.

R-rated GUY’s depictions of liquor-drinking, shady car deals, fornication, and an attempted rape (the latter is only heard, not seen) make it completely unsuitable for children under the age of 18. Also, neither God nor Christ are elements in this movie (though the decay of Guy’s life shows some sense of negative consequences for his questionable actions). For GUY, humans are the highest moral standard.

However, there may be an audience for which GUY might be edifying: adults who are often in the media’s eye, harassed by paparazzi; actors and actresses who have compromised their virtue while play to the whims of the camera; and, aspiring filmmakers, who use cameras to tell fiction and non-fiction stories for wider consumption. GUY powerfully portrays the seductiveness of being a camera’s subject, the heady lure of being “on” camera and the drug-like thrill of being the main object of a camera’s (and thus presumably the viewing audience’s) rapt attention.

Director Lindsay-Hogg GUY also powerfully portrays the seductiveness of controlling the camera ( of being the picture-takers who influence the images by which people see themselves because of how they have chosen to represent them. GUY forces viewers to assess the degree to which the camera is responsible for the moral choices made by those in the camera’s viewfinder. Is it possible, in our media-glutted age, that the makers of graven images (TV and filmmakers) have helped create a cult of narcissistic demigods ( that media people, if they are not careful, can become priests perpetuating the cult of self-idolization? Is it sometimes true, like some primitive peoples believed, that “the man [or woman] with the black box can suck out our souls and keep them locked away inside?”

Of course, the main characters in GUY are not well-balanced, Bible-believing, God-centered, love-focused people; therefore, they are easily susceptible to the enticement of a supposed immortality coming through the mediated recording of voices and images. Yet, Christians should also take heed ( whether or not they see GUY ( because “these things happened to them as examples and … as warnings for us …. So, if you think you are standing firm, be careful that you don’t fall!” (1 Corinthians 10:11, 12). The First and Second Commandments are quite clear: “You shall have no other gods [certainly not any filmed image] before Me,” and “You shall not make for yourself an idol in the form of anything in heaven above or on the earth beneath …. You shall not bow down to them or worship them” (Exodus 20:3, 4).

Director: Director Lindsay-Hogg GUY also powerfully portrays the seductiveness of controlling the camera ( of being the picture-takers who influence the images by which people see themselves because of how they have chosen to represent them. GUY forces viewers to assess the degree to which the camera is responsible for the moral choices made by those in the camera's viewfinder. Is it possible, in our media-glutted age, that the makers of graven images (TV, filmmakers) have helped create a cult of narcissistic demigods ( that media people, if they are not careful, can become priests perpetuating the cult of self-idolization? Is it sometimes true, like some primitive peoples believed, that "the man [or woman] with the black box can suck out our souls, keep them locked away inside?"