TARZAN AND THE LOST CITY

"Politically Correct Lord of the Apes" 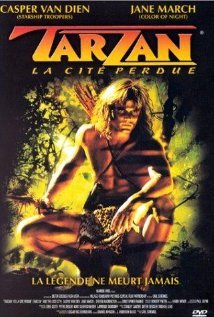 TARZAN AND THE LOST CITY opens with a title telling us how John Clayton, played by Casper Van Dien, was reared by the great apes in Africa after his father, the Earl of Greystoke, lost his life on a geological expedition. Cut to 1913, when evil Europeans, led by Nigel Ravens, are raiding an African village. They find an amulet bearing the directions to the lost city of Opar. The witch doctor calls for John Clayton who is about to marry Lady Jane in England. Seeing a vision, John brakes off the wedding and heads for Africa. There, he reestablishes his friendships with the animals and native Africans so together they can stop Nigel Ravens.

This movie has boiled down author Edgar Rice Burroughs' romantic musings to a pagan, anti-European, environmentalist adventure, although it takes a white hero to get the natives out of trouble. The movie has no foul language. The witchcraft and violence, though dark, seem tame in comparison with other movies. Other family reviewers may give a thumbs up to TARZAN because of the lack of foul language and the muted violence, but beware there are some serious pro-witchcraft, pro-environment and anti-European messages in this movie that you may not want planted in your children's minds.

Edgar Rice Burroughs’ TARZAN has been the subject of 45 movies. The obverse of the noble savage, he is an English peer raised in the jungle who combines the best of thoroughbred aristocracy with the romantic notion of native nobility. The latest Tarzan, entitled TARZAN AND THE LOST CITY, has a 1930s feel to it. It opens with a title card telling us how John Clayton (Casper Van Dien), the Earl of Greystoke, came to be reared by the great apes in Africa after his father lost his life on a geological expedition.

Cut to 1913, a bad bunch of Europeans, led by Nigel Ravens (Steven Waddington), are raiding a black African village when they find an amulet bearing the directions to the lost city of Opar. The witch doctor chief calls for John Clayton, who is in England, preparing to marry Lady Jane. Seeing a magical vision of the torched village in the fireplace during his bachelor party, John brakes off the wedding and heads for Africa. There, he re-establishes his uncanny friendships with the animals and with the native African tribes.

The natives have saved his Tarzan loincloth for him, and he starts out to right the wrongs committed by the evil Europeans by throwing Nigel’s supplies overboard. Jane follows Clayton a.k.a. Tarzan to Africa and adds a certain 1990’s “perils of Pauline” vulnerability to the plot. Nigel wants to find the lost city of Opar and become rich and famous because nobody ever believed in him. Tarzan wants to protect the environment and the natives. However, the real hero in this movie is the witchdoctor who rescues Tarzan from a cobra by turning into a swarm of bees and then saves the day by turning into a giant cobra. Clearly, there is no power outside of his power.

Jane adds a late 20th Century sensibility to the movie, and Tarzan performs admirably without the slightest touch of angst. All of Edgar Rice Burroughs’ romantic musings have been boiled down to a pagan, gone-native, anti-white, environmentalist adventure. As is the trouble with many of these anti-European movies, it takes a great white hero to get the natives out of trouble.

The movie surprisingly has no foul language. The witchcraft and special effects, though dark, seem tame in comparison with Hollywood’s high budget violent special effects. Also, the apes seem to have left their fur on mothballs for too long. Furthermore, the falling rocks bounce around in the jaunty manner of the early Tarzan movies. Finally, picturesque shots of Africa clash with phony shots of the city of Opar.

This is one of these movies that other family reviewers will probably give a thumbs up to because of the lack of foul language, the tame sexual relationship and the muted violence, but beware ( there are some serious messages in this movie, which is pro-witchcraft, pro-environment and anti-white, that you may not want planted in the minds of your children.