"The Politics of Envy" 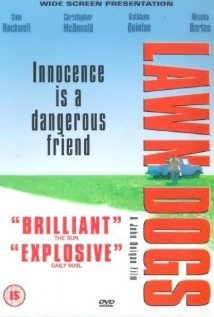 In LAWN DOGS, the politics of envy is depicted through the relationship between Devon (Mischa Barton), a 10-year-old girl, and Trent (Sam Rockwell), a 21-year-old yard man. Devon has just moved to a wealthy Kentucky community with her parents. Trent works for the community's rich residents, whose children taunt him with epithets of "white trash." Trent continues to do his job because he needs the money, even when Devon's parents mistreat him. Eventually, Devon's father and one of the older youths falsely accuse Trent of molesting Devon. They start beating him. Devon takes things into her own hands by shooting the young man and threatening to shoot her dad so Trent can escape. This takes the audience by surprise, and it becomes frightful to watch the lack of emotion from Devon as she fires the gun and watches Sean bleeding in pain.

The central socialist theme of this well-acted film is that social inequity exists in today's society. Regrettably, the avenue taken to present this theme to the audience leaves the viewer feeling unsettled. Using a 10-year-old child to commit a criminal act without any emotion is carrying this concept to the extreme, especially since there is not any detailed explanation of how Devon got to this destructive place.

In this disturbing and quirky film, LAWN DOGS, the disparity between the social classes is depicted through the relationship between Devon (Mischa Barton), a 10-year-old girl, and Trent (Sam Rockwell), a 21-year-old who works mowing lawns. Devon has just moved to a wealthy Kentucky community, Camelot Gardens, with her parents two months prior. She does not make friends easily because she is a “little different” from the other children due to heart problems, having undergone two surgeries thus far. Her parents, Clare (Kathleen Quinlan) and Morton (Christopher McDonald), appear superficial and empty. Concerned with maintaining their social status and void of any kind of emotional intimacy, they are always telling Devon what to do and how to behave “properly,” but never listen to her or get to know her for who she is.

Trent, on the other hand, is quite real and earthy, making his living mowing lawns in Camelot Gardens. Despite the taunting he receives from the children and being referred to as “white trash,” Trent continues to do his job because he needs the money. He drives a 1965 Ford truck and lives in old trailer in the woods. The inequality is made evident with many examples in this movie, including a scene where Devon’s parents forget to pay Trent, and so he must go and ask for his money. When he asks if he could use the restroom, they shut the door with no response and so he has to use a cup in his truck to relieve himself.

Devon is intrigued by Trent and, when she is exploring the woods one day, she comes across his trailer. She seeks Trent’s friendship and, although hesitant at first, Trent finally succumbs to her charms, and they become “buddies.” When Clare and Morton observe Trent giving Devon a turtle, they become perturbed and ask two college-age neighbors, Sean and Brett, to keep an eye on Trent. Wanting to cause trouble for Trent, they take on this task with joy. One day, they accuse Trent of stealing their CDs and attack him with a lawn tool, even siccing their Doberman on him. Seeing this, Devon wants to protect her friend. Regrettably, one day she convinces Trent, against his better judgment, to let her spend the night. Her motives for this are unclear in the movie.

The next day her father and Sean accuse Trent of molesting Devon and start beating him mercilessly. Devon takes things into her own hands by shooting Sean and threatening to shoot her dad so Trent can escape. This takes the audience by surprise. It is even more frightful to watch the lack of emotion from Devon as she fires the gun and watches Sean bleeding in pain. That is how the movie abruptly ends.

The central socialist theme of this movie focuses on the purported social inequity that takes place in today’s society. Regrettably, the avenue taken to present this to the audience leaves the viewer feeling unsettled. Using a 10-year-old child to commit a criminal act without any emotion is carrying this concept to the extreme, especially since there is not any detailed explanation of how Devon got to this destructive place. The portrayal of the fact that wealth has caused her parents to lose sight of the importance of imparting values and morals to their child, in and of itself, is not enough to illuminate and clarify to the viewer how Devon came to perform such a terrifying act. One is left to wonder whether there were any other traumatic events in the family to affect Devon. Thus, LAWN DOGS, which contains no references to God or religious ethics, treats the idea of a child using a gun in too cavalier a fashion.

The acting in this film was quite good. Kathleen Quinlan, recently seen in APOLLO 13 and MY GIANT with good performances, does not appear to fit the role of Clare. Mischa Barton, who plays the role of Devon well, has appeared in a few films including NEW YORK CROSSING and on television in ALL MY CHILDREN. Christopher McDonald had just come off the LEAVE IT TO BEAVER set to play the role of Morton. Finally, Sam Rockwell, recently seen in BOX OF MOONLIGHT, was coached to attain his Kentucky dialect for his role as Trent.

With such good subject matter, it is disappointing that the audience leaves the theater feeling distraught and disquieted instead of enlightened. LAWN DOGS does, however, prompt one to think about the value that all human beings have the importance of modeling good morals and upholding good values within the family unit.