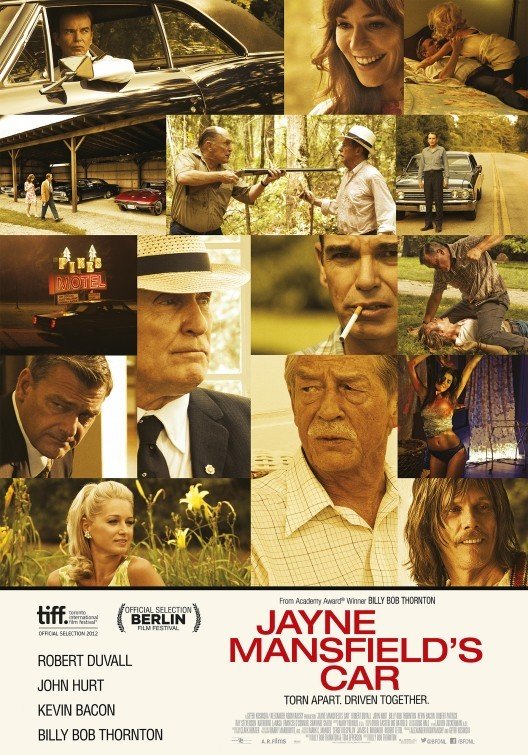 JAYNE MANSFIELD’S CAR is about an American family in Alabama forced to interact with a Scottish family due to a funeral. The story is set in 1969 at the height of the Vietnam War. The reason for the get-together is because, many years before, the Southern family’s patriarch had his wife leaving him while visiting Scotland because she fell in love with another man. Now that she’s died, however, her wish is to be buried in the Southern family’s cemetery area. So, both families are trying to honor her wishes. The Southern family’s men are also split over disagreements about the Vietnam War.

JAYNE MANSFIELD’S CAR has some funny, dramatic and touching moments. There are several beautifully written and performed monologues from various characters, played by veteran actors. However, the movie doesn’t have a clear storyline and is too episodic to be fully effective. It’s also too slow-paced for the average moviegoer. Finally, despite some elements of forgiveness and reconciliation, the movie contains abundant foul language, brief nudity and other explicit moments. So, extreme caution is warranted for JAYNE MANSFIELD’S CAR.

(PaPa, C, B, LLL, VV, SS, NN, AA, DDD, MM) Slightly mixed pagan worldview about an American family in Alabama and the impact that occurs when they have to interact with a Scottish family due to a funeral, with family members having to reconcile their differences, partly by forgiveness; more than 170 obscenities and profanities, including many “f” words; frequent discussion surrounding the scars of war and an elderly man finds fascination in witnessing car crashes and their bloody results up close, both for something to break his town’s boredom and to speculate about the afterlife in one brief moment; implied adultery and a man makes a sexual pass at a Scottish woman and later is seen implied self-abuse while woman poses naked in front of him, though audiences only see the actress topless rather than full nudity; upper female nudity, upper and rear male nudity; alcohol use and drunkenness; several characters smoke marijuana and positively discuss taking acid before one person accidentally puts LSD in an 80-year-old man’s coffee, with the old man’s drug trip played for laughs; and, strong miscellaneous immorality includes bitterness, gossip, and rudeness from the Southerners to the Scots and family members argue between generations.

JAYNE MANSFIELD’S CAR is the ensemble story of an American family in Alabama and the impact that occurs when they have to interact with a Scottish family due to a funeral. JAYNE MANSFIELD’S CAR has a strong Romantic worldview that is somewhat muted by the fact that the characters are at heart sad people due to their poor life choices.

Set in 1969 at the height of the Vietnam War, the story follows the misadventures, both funny and serious, that occur when the two families have to interact despite severe cultural differences. The reason for this exchange is because the patriarch of the Southern family many years before had suffered his wife leaving him while visiting Scotland because she fell in love with another man. Now that she’s died, however, her wish is to be buried in the Southern family’s cemetery area. So, both families are trying to honor her wishes.

While that storyline causes a mix of humorous, serious and touching events to occur, the movie also has a major storyline where the family patriarch and one of his sons, a long-haired, frequently high hippie, fight over the Vietnam War. Their relationship has been distant since the son returned from World War II with heavy emotional issues. The son is concerned that his own son is old enough for the Vietnam-era draft. He begs his son not to enlist.

JAYNE MANSFIELD’S CAR is the first writing-directing effort for Thornton in several years, after his DADDY & THEM barely earned release, but he’s renowned for his superb debut movie SLING BLADE. Here, he tries again to capture Southern small-town life and a deep sense of sadness. Thornton hits the mark very well in some scenes, with a number of even beautifully written and performed monologues from various characters. However, the movie as a whole doesn’t have a clear storyline and feels too episodic to be fully effective. It’s also too slow-paced for the average moviegoer, but those willing to invest their time, thoughts, and emotions in this movie may feel rewarded.

That said, the movie’s worldview is mostly pagan, despite some redemptive, moral themes of forgiveness and reconciliation. JAYNE MANSFIELD’S CAR also has abundant foul language, brief nudity, and other explicit content. So, extreme caution is warranted.