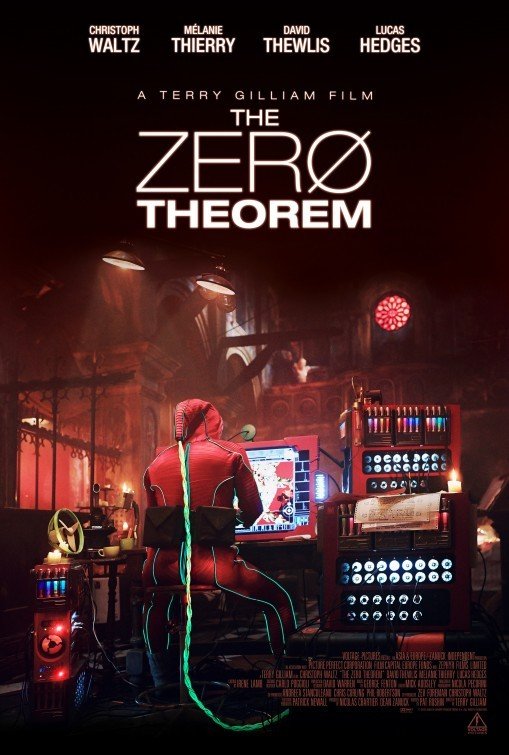 THE ZERO THEOREM stars Christoph Waltz as Qohen, a faceless bureaucrat in a futuristic society where advertising follows people everywhere and nearly every interaction involves work and computers. Qohen is assigned to solve a theorem about the meaning of life and the universe while he waits for a phone call telling him what the meaning of his own life is. Meanwhile, his bosses send him a woman to distract him and a teenage wonderkid to help him solve the zero theorem.

THE ZERO THEOREM has many impressive visuals, but its confusing storyline is an utter mess. Also, the lead performance by Christoph Waltz is shockingly annoying and filled with shrieking. Eventually, the protagonist learns that there is no ultimate meaning to life or the universe, and his bosses knew this all along. That information drives him to one last bout of frustration. Ultimately, therefore, THE ZERO THEOREM has a humanist, nihilistic worldview that’s Anti-Christian and anti-religious. The main symbol at the end is of a headless crucifix. THE ZERO THEOREM also contains lots of strong foul language and other crude content.

(HHH, AbAbAb, LLL, VV, SSS, NN, AA, MMM) Very strong humanist, nihilistic, existential, Anti-Christian, Anti-God worldview about a futuristic bureaucrat assigned to prove that there is meaning to life and the universe while perpetually waiting for a phone call telling him what the meaning of life is (apparently the answer is that life has no meaning except what people insert into it and into their own personal journey); about 60 to 65 obscenities and profanities (including 20 or more “f” words and 20 or more profanities using Jesus); brief strong violence includes a couple fights where men wrestle each other, protagonist almost chokes to death and protagonist destroys furniture and technology – as well as a giant crucifix that already is missing Jesus’ head – when he gets frustrated at one point; extreme sexual content includes bizarre sexual imagery, a prostitute is sent to a main’s living quarters and distract him from his woes with virtual sex, a series of sexual video games appear on protagonist’s computer with women dressed in scanty outfits and occasionally nude for brief moments that invite him to “enter here” with a video-game cursor that reads that message right over their private parts, and fantasies of being on a beach with the prostitute who eventually takes off her bikini top; shots of upper female nudity and rear male nudity; a couple party scenes where characters are drunk on alcohol, but the protagonist refuses the drinks; no smoking or drugs; and, an apparently hedonistic outcome, philosophically and emotionally speaking, where people make their own personal meaning and pleasure, and movie says people are stupid for believing in God (as shown by a joke about a church devoted to “Batman the Redeemer”).

THE ZERO THEOREM is a tiresome movie about a futuristic bureaucrat assigned to prove that there is meaning to life and the universe while perpetually waiting for a phone call telling him what the meaning of life really is. THE ZERO THEOREM is an extremely confusing, unpleasant mess of a science fiction tale with an extremely humanist worldview with very strong Anti-Christian, anti-religious content that also includes lots of strong foul language and extreme sexual content.

ZERO THEOREM stars two-time Oscar-winning actor Christoph Waltz as a man named Qohen, a faceless bureaucrat in a futuristic society where advertising follows everyone seemingly everywhere and nearly every interaction involves work and computers. Qohen is hopelessly bored and depressed with his lot in life. He begs his boss to let employees work from home, while he’s also obsessed with receiving a phone call that he believes will tell him what the meaning of his life is. Qohen has a couple mysterious meetings with his creepy top boss, known only as Management (Matt Damon), and gets the right to work from home.

Qohen burrows into his house (a converted dilapidated church) for a year while trying to constantly solve an equation called The Zero Theorem. The equation is supposed to prove once and for all whether the universe was created by God and whether life has any special meaning. Slowly, Qohen starts to go crazy.

Meanwhile, his lower-rung boss sends over what appears to be a prostitute, though the woman will let him only look at her but not touch her. Eventually, this woman and scantily clad others also start appear on Qohen’s computer screen. So, he dives ever further into attempts to have virtual sex with them while also having deeper and deeper conversations with both her and a teenage boy, who happens to be Management’s precocious son.

Qohen jumps between the bizarrely seductive game that leads to his sexual experimentation and his continued obsession with the Zero Theorem. [SPOILERS FOLLOW] Qohen finally is revisited by Management and told that there is no meaning to existence or the universe and that they already knew that all along. This information drives Qohen to one last bout of frustration, where he destroys many of the objects in the converted church where he lives. He even tears down a crucifix that was already missing Jesus’ head, which was replaced by a camera so that his company could spy on him. If anyone wonders whether Gilliam – a Monty Python comedy troupe alum who has made both interetesting movies (THE FISHER KING, 12 MONKEYS, BRAZIL) and terrible ones (TIDELAND, THE IMAGINARIUM OF DR. PARNASSUS) over his lengthy career – meant to convey an Anti-Christian message, the movie’s final image after the end credits is the headless crucifix.

THE ZERO THEOREM has some impressive visuals, but its confusing storyline is an utter mess. In fact, the lead performance by Christoph Waltz is shockingly annoying and filled with shrieking. Also, the rampant use of bizarre sexual imagery in the second half is utterly annoying and tiresome as well as offensive. Add in the movie’s not-so-hidden agenda of scoffing at the existence of God, and you have a thoroughly abhorrent movie with little artistic or entertainment value that no Christian, nor any viewer with a modicum of taste, will want to watch.