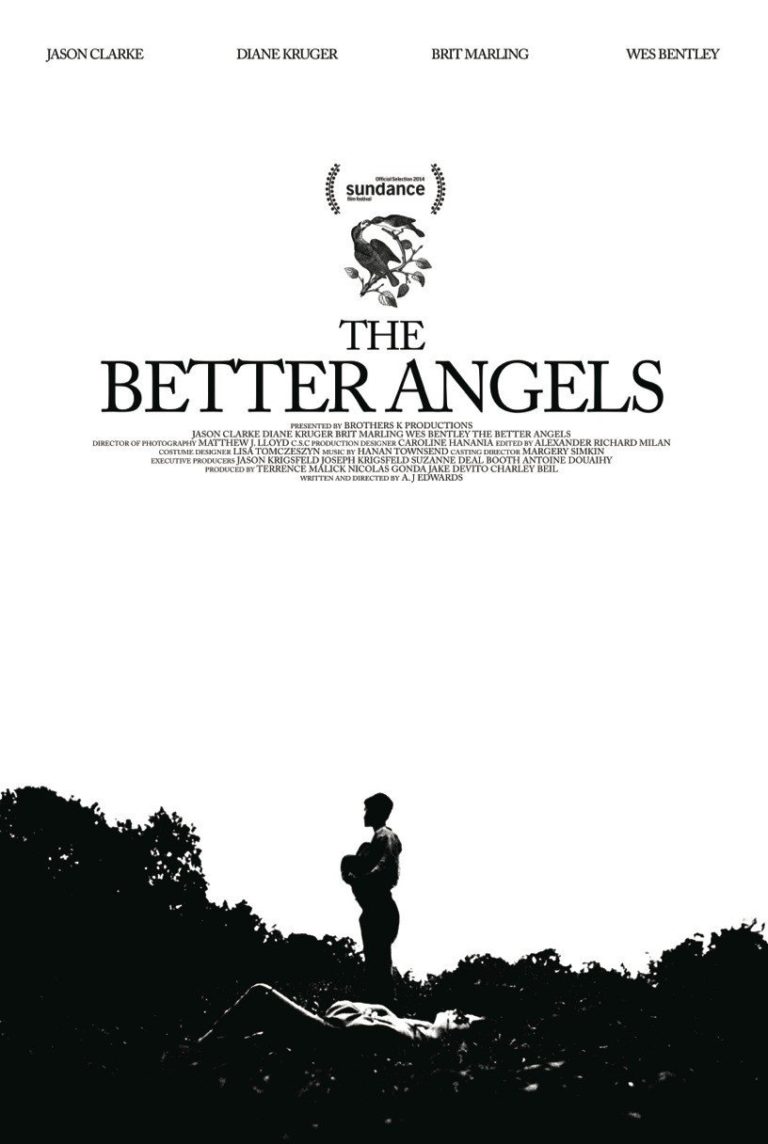 THE BETTER ANGELS is a biographical drama detailing three years of Abraham Lincoln’s childhood. It begins in 1818 when Abe is 8-years-old working on the family farm. Though he prefers reading books to plowing the field, Abe obediently fulfills his role in the family’s livelihood. His mother is his strongest supporter, encouraging his education while his father finds it merely a distraction. When she dies, Abe has difficulty accepting her death, but has no choice as his father remarries and rebuilds their family. Eventually, Abe is allowed to attend school, introducing him to the world beyond the woods where he was raised.

Shot in black and white, THE BETTER ANGELS uses stunning, memorable imagery and ambient sounds to tell the story just as much as dialogue. Its intimate nature makes viewers feel part of the Lincoln family, experiencing the harsh wilderness along with them. The story interweaves moral examples along with Christian displays of prayer, worship and faith. THE BETTER ANGELS makes a great family movie and history lesson, but caution is advised for younger children due to tragedy and death.

(CCC, BBB, CapCapCap, PPP, L, V, D, M) Very strong Christian, moral, capitalist worldview moral and biblical worldview depicting characters as Christians, praying, reading the Bible, teaching about God in school, attending church, promoting honesty and hard work, teaching charitable giving and helping those less fortunate, and making an honest living and paying your own way through life, with a very positive portrayal of American values as well; one use of the “h” word; dead livestock depicted in the distance, multiple character deaths due to sickness, father whips son as punishment, it’s implied dog is killed by wild animals, shooting rifles while hunting though nothing is shown as killed, implied death due to assassination; upper male nudity with boy’s bathing, wrestling and playing in river; no alcohol; one brief instance of man smoking a pipe; and, boys lying to father about wrongdoings and playing joke on dog that results in dog’s death, father is harsh with son at times but not abusive, brief scene with slaves in chains, and son unintentionally steals from mother.

THE BETTER ANGELS is a stunning, intimate biographical drama about Abraham Lincoln’s boyhood in the backwoods of Indiana. Rather than try to span a wide swatch of his life as many biographical movies do, it focuses on three of his most formative years as he suffers through unimaginable loss and discovers a whole world outside his sheltered upbringing.

The story begins in 1818 with 8-year-old Abraham working the family farm and helping his father with his carpentry work. Told from the view of his cousin, Dennis, it looks back at what their childhood was like. The movie is less a chronological story and more of a series of vignettes highlighting the most shattering events in Abe’s boyhood, including some quiet moments that may seem unimportant in the grand scheme of things, but serve to underscore the character relationships.

Abe is shown as a book-lover, taking breaks in the countryside to read in between plowing rows of crops in the field. His father doesn’t take to his habit of study, expressing his displeasure at Abe’s preference for education over working the farm. This never seems to faze Abraham, and he willingly accepts his father’s reproach, obediently attending to his duties.

Mrs. Lincoln doesn’t share her husband’s view of their son. She encourages him to learn all he can, even teaching him what she knows about the natural world around them. However, this is short lived as Abe finds his strongest supporter battling with milk sickness, eventually succumbing to the illness.

Abe’s father eventually leaves his children and their cousin, Dennis (who’s now come to live with them), alone to tend to the farm while he travels back to Kentucky to find a new wife and mother for their family. He returns newly married to a widow, bringing her back to the farm in Indiana along with her own children. Now, they must all blend together as a family, and Abe must work past his mother’s death.

When a small schoolhouse is formed close to the family’s farm, Abe begins to come out of his shell. The entire movie he is seen as solemn and quiet, but as soon as he is introduced to the larger world and begins to experience things he had only read about before, he begins to blossom and develop many traits that came to serve him well in the professional and political arena.

The movie’s style makes the viewer feel as if they are present with the characters, experiencing life in the largely sparse wilderness along with them. The audience is privy to some very intimate moments in the character’s lives, and the acting paired with the camera movements make it feel completely natural in a way that traditional moviemaking techniques often fail to capture. The technique is inspired by the work of famed director Terrence Malick, using images to tell the story just as much as dialogue. Much of the movie is silent with only ambient sounds or the elegant soundtrack for company. It relies minimally on character dialogue and narration by Dennis to move the story along. The stunning black and white cinematography paints a masterful picture of what life would have been like for the Lincoln family at that time. In fact, it makes even the most mundane moments in young Lincoln’s everyday life seem truly profound.

Families and history buffs will enjoy THE BETTER ANGELS for its unique portrayal of one of the most famous men of the 19th Century. Its strong Christian, moral content strongly reinforce biblical values, and the family bond is shown as triumphant through even the harshest of circumstances. The movie has virtually no language or immoral content to keep children away, but its style may make it hard for children to stay interested throughout the whole story. That said, THE BETTER ANGELS may not be suitable for younger children due to mature content such as character deaths and some harsh, but not abusive, treatment towards Abe from his father.