"Life Is Hopeless and Cruel" 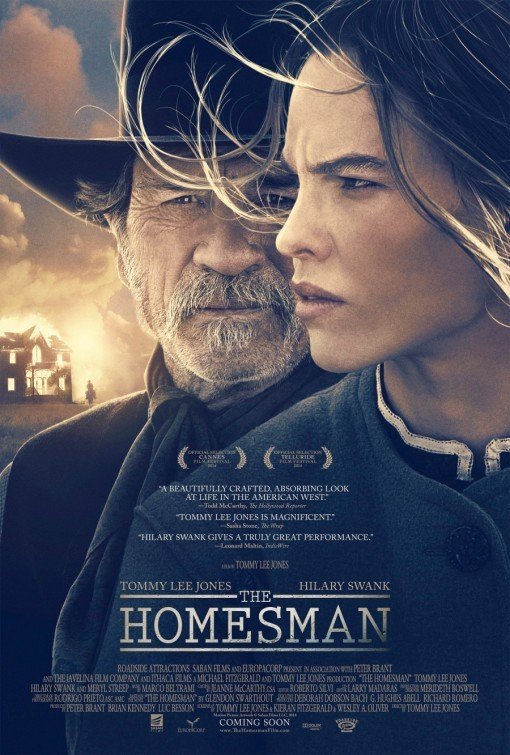 THE HOMESMAN is a quirky, slow-moving, ultimately depressing western. It opens in a cold, windswept prairie town in the Nebraska Territory before the Civil War. Mary Bee, an old maid with a farm and ranch, volunteers to take three pioneer women who’ve gone insane back to Iowa, whereupon they will be placed in asylums. She enlists the aid of George Briggs, a grizzly, middle-aged ne’er do well. Just when Mary Bee and George develop a mutual respect for one another, an act of desperation and longing results in tragedy and murder.

THE HOMESMAN depicts Mary Bee as a strong, admirable and God-fearing Christian woman. Her character’s strength and faith is what give the movie its best moments. However, Mary Bee is overcome eventually by the harsh environment and cruel society in which she struggles to survive. Then, when the ending starts to turn things around, a couple final scenes pull the rug out from the viewer again. THE HOMESMAN is too slow and also contains disturbing, lurid scenes of murder, lewdness and insanity. It just paints too dark and depressing a picture.

(RoRoRo, FeFeFe, APAP, PCPCPC, RHRH, CC, B, LLL, VV, SS, NN, AA, D, MM) Very strong Romantic, rather depressing worldview with a very strong feminist subtext about a strong Christian woman taking three insane pioneer women back to civilization, but this task proves too much for her, because, apparently, American society (especially in the Wild West) is too patriarchal and too oppressive/uncaring, even for a strong Christian woman, and a Christian pastor on the frontier seems to be a positive character, but he’s ultimately ineffectual and a bit weak in the face of the harsh environment and the patriarchal oppression in which he and his flock live; 37 obscenities, 16 strong profanities (all but one GD) and five light profanities; strong violence includes man shot in leg, men throw dynamite down chimney to get squatter out of empty house, man sets fire to empty new hotel and lets people burn alive because the real estate developers wouldn’t let him and three women get fed and stay in any room, plus it’s implied a woman hanged herself, insane women act violently a few times, and a woman tosses her baby into the outhouse; depicted sex between husband and mad wife and depicted fornication between unmarried couple; upper female nudity in two scenes and rear female nudity in another scene; alcohol use and drunkenness; smoking; and, woman hides money from man she hires to complete a difficult job, themes of insanity, Indians extort a horse from a small band of pioneers fearful of being murdered, and cruelty in a cruel landscape.

THE HOMESMAN is a quirky, slow-moving, ultimately depressing western based on a novel. It sometimes seems to have a Christian viewpoint but then undercuts it in a couple strange, somewhat ambiguous ways that left MOVIEGUIDE® scratching its proverbial head. Also, the opening has some parallel cutting of disturbing events that aren’t explained right away until the first plot twist or turning point leading to the second act. The novelist, screenwriter and director clearly needed to go back to the drawing board.

The story opens in a cold, windswept prairie town in the Nebraska Territory before the Civil War. Mary Bee, an old maid with a farm and ranch outside of town, tries to ply a cowboy with her excellent cooking to get him to marry her, but she’s too plain for him. Meanwhile, three wives in town go insane, one of them because three of her children have died as young children.

The local church votes to send the three women back to civilization to be placed in asylums. A pastor and his wife back East have agreed to handle the details and act as go-betweens with the women’s families. However, no one in town wants to travel the month-long trip to take the women back to the pastor and his wife. Mary Bee volunteers, but she enlists the aid of a grizzly, middle-aged ne’er do well named George Briggs, played by Tommy Lee Jones (who helped adapt the novel and directs the movie).

May Bee and George at first bump heads, but as they face the trials and tribulations of traveling through the wasteland, they begin develop a mutual respect. Just when you think they’re all going to make it back East, an act of desperation and longing results in tragedy and murder.

Some of the greatest westerns ever made, from SHANE to UNFORGIVEN, use tragedy and loss to increase the jeopardy and enrich the genre’s potent themes, but THE HOMESMAN takes this to a depressing level that undercuts whatever goodwill viewers might have toward the movie’s story and its genre. This is especially true since Mary Bee’s character is depicted as a strong God-fearing, Christian woman. Her character’s strength and faith is what give the movie some of its best moments. However, her character’s hopeful attitude leads her to make a desperate appeal to George that ends in despair, tragedy and murder. Then, just when you think the movie might recover from these low points and deliver some hope, the last two scenes end with an outcome that pulls the rug out from the viewer again. Apparently, there is no balm in Gilead in this movie’s worldview of despair.

THE HOMESMAN also contains disturbing, lurid scenes of murder, lewdness and insanity. In addition, the cuts at the beginning to the history of the insane women are rather confusing, and the middle of the movie needs more jeopardy. So, MOVIEGUIDE® can’t even recommend this movie to fans of the western genre, much less media-wise viewers. THE HOMESMAN just paints too dark a picture where the world is just a depressing, dark place filled with such great tragedy and cruelty that the only thing to do is get drunk and dance a jig, which is exactly what the George character does in the movie’s final scene.