"A Story of Personal Triumph Amid Public Tragedy" 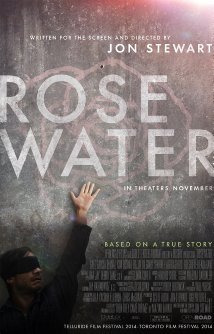 ROSEWATER tells the true story of Canadian-Iranian journalist Maziar Bahari who traveled to Iran in 2009 to cover the presidential elections for Newsweek Magazine. Ba-hari decides to release video of protestors demonstrating against the evil, unjust Islamic dictatorship in Iran. So, the government arrests him and sends him to prison, where he’s accused of being a media spy from America. They interrogate, torture and threaten to kill him unless he confesses to misleading the Iranian people with his western propaganda. Under intense pressure, Bahari fights an internal battle of staying loyal to his beliefs and values or denying his principles so he can be released and see his family again.

ROSEWATER gives a realistic insight into the culture and political environment of an Islamic dictatorship. It brings to light the obstacles to freedom that the people of Iran are facing. Overall, therefore, the movie and its protagonist have a strong moral worldview promoting American values of liberty and opposing Iran’s totalitarian Islamic leaders. However, it also contains very strong, intense violence and some strong foul language. So, MOVIEGUIDE® advises extreme caution for ROSEWATER.

(BB, ACAC, AP, Acap, Ab, FRFR, Co, LL, VVV, S, N, A, D, MM) Strong moral, anti-totalitarian worldview overall as an Iranian from London working for News-week encounters the Anti-American, anti-capitalist and Anti-Jewish or Anti-Semitic atti-tudes of Iran’s current Islamic government and its supporters while covering the 2009 elections there, but with brief scenes of Muslim religion being practiced and protagonist in a jail cell imagines talking with his dead father and older sister, who were jailed form being communists under the Shah of Iran (the father) and under the Muslims (older sister) but protagonist chastises his imaginary father for being a communist; about 20 obsceni-ties and profanities, including some “f” words; very strong and intense violence but not extremely graphic or gory with a few scenes of rioters being beaten, setting fires in the streets, people being shot in a crowd with some blood shown, prisoners being beaten and heard being tortured, a hallucinated suicide, a gun to the head, and a harrowing sequence where the protagonist is led to believe he’s about to be shot; light, non-visual sexual ref-erences include character accused of cheating and indulging in pornography (he has a DVD of programs from THE SOPRANOS), faked descriptions of sexual massages be-come a comical moment, and characters want to indulge in sexual fantasy; upper male nudity while sleeping; light drinking during meal; multiple instances of cigarette smoking but no drugs; and, some lying to avoid torture, ethnic prejudice, citizens break Iranian law, male supremacy attitude toward women.

ROSEWATER is a dramatic account of Maziar Bahari’s true story as a journalist from Iran who now lives with his wife in London. Newsweek sends him on assignment to cover the 2009 Iranian presidential elections. His political views are skewed towards those of the west, and he secretly wants the dictator Mahmoud Ahmadinejad voted out of office.

Leaving his pregnant wife behind, Bahari arrives in Tehran and quickly makes friends with his cab driver, Davood, after learning that the driver’s political sentiments are aligned with his own. Bahari hires Davood to be his personal driver for the week, but finds himself entangled in Davood’s network of friends opposing Ahmadinejad. Excitement for a revolution against the standing government grows among the people, and Ba-hari happily captures it on film as the elections take place. However, Ahmadinejad is de-clared the victor, and the people begin to revolt against what they believe is a rigged elec-tion.

Caught in the middle of it all, Bahari films the riots and demonstrations protesting the unjustness of the election. He decides to release the footage despite the danger of the government coming after him. His fears are realized as he is awakened the next morning, arrested and sent to prison, where Iranian authorities accuse him of being a media spy from America. They interrogate, torture and threaten to kill him unless he confesses to misleading the Iranian people with his western propaganda. Torn between never seeing his family again and standing up for his principles, Bahari must find a way to survive.

ROSEWATER gives a very realistic insight into the culture and political environment of an Islamic dictatorship and brings to light the obstacles to freedom that people in Iran are facing. In that sense, the movie makes one appreciate the privileges of living in America while it promotes universal truth and justice. Overall, therefore, the movie and its protagonist have a strong moral worldview promoting American values of liberty. Because of the movie’s setting, the villains in ROSEWATER express Anti-Western values as well as some Anti-Semitism. Political violence and torture are featured in many scenes, though nothing is exceptionally graphic or bloody. ROSEWATER also has some strong foul language.

ROSEWATER is rated R and is targeted at mature viewers, with very strong violence and some strong obscenities. Therefore, it isn’t appropriate for children or younger teen-agers. Though nothing overtly graphic is shown, there are several very intense moments of near-death experiences.