"A Hacked Up Mess" 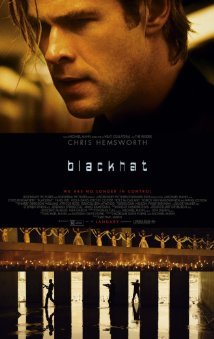 BLACKHAT is a cyber action thriller from acclaimed Director Michael Mann. A terrorist hacks a nuclear power plant in Hong Kong and causes an explosion that forces an evacuation from the premises and results in many deaths. Soon after the Hong Kong attack, the Mercantile Trade Exchange in Chicago is hacked and soy prices are manipulated to skyrocket. A Chinese cyber-security captain and his skilled younger sister work with the FBI to catch the cyber terrorist. They need help from highly skilled hacker Nicholas Hathaway, who’s currently in prison serving time.

BLACKHAT has an interesting plot, but suffers horribly from the director’s odd choices. Bad camera work, acting, editing, and an overly dramatic score hurt the believability and likability of the story and characters. The movie starts off promisingly but ends badly. For example, the story starts with a team coming together to catch a terrorist but turns into a story of revenge, with no justice and no redemption. BLACKHAT also contains some bursts of extreme violence and brief gratuitous lewd content, so it ends up being a major disappointment.

(PaPaPa, BB, P, LL, VVV, SS, N, A, D, MM) Very strong mixed pagan worldview where most of the movie has positive moral aspects of men and women trying to catch an evil terrorist, but by the end, it turns into a pagan vengeance story with moral relativism, although the female FBI agent is shown positively and is motivated to defend her country because her husband died during 9/11; eight obscenities (including two f-words) and two strong profanities; some sudden graphic action violence, men fight and bad guys are shot, stabbed in the head, slashed in the face with broken bottles, arms are broken, multiple people die from explosions and a burnt corpse is shown; depicted clothed sex with movements seen, cut to man in woman naked underneath sheets, they’re seen in bed a few additional times; upper male nudity, woman naked under sheets, but nothing explicit is shown; light drinking; light smoking; and, [SPOILERS] protagonists decide to kill bad guy out of vengeance and steal the money he already stole, thus, ending the movie with moral relativism.

BLACKHAT is a cyber action thriller about stopping an evil computer hacking terrorist from acclaimed Director Michael Mann (THE INSIDER, HEAT and LAST OF THE MOHICANS). Most of the movie has a moral storyline until the ending takes the movie into an immoral, pagan direction.

A terrorist hacks a nuclear power plant in Hong Kong and causes an explosion that forces an evacuation from the premises and results in many deaths. Not long after the Hong Kong attack, the Mercantile Trade Exchange in Chicago is hacked and soy prices are manipulated to skyrocket.

Chen Dawai, a Chinese cyberdefense unit captain who studied at MIT, reaches out to FBI special agent Carol Barrett (Viola Davis). The two governments decide to work together to help catch this terrorist hacker who they’re sure has another attack planned. Chen enlists his sister, Lien’s, help, who’s a brilliant engineer. Chen also states that to catch the attacker, he’ll need the help of his old MIT friend and skilled hacker Nicholas Hathaway (Chris Hemsworth), who’s currently doing time in a federal penitentiary.

Hathaway is temporarily released. If he helps catch the mysterious attacker, he’ll get out of prison for good. Meanwhile, Chen, Lien, Hathaway, Carol, and a U.S. Marshall keep an eye on Hathaway traveling around the world looking for clues. As they do so, Hathaway and Lien become close, which worries her brother Chen since their mission is becoming more and more dangerous.

BLACKHAT has an interesting plot, but suffers horribly from the director’s odd choices. Attempting to ground the movie in realism, Director Michael Mann enlists the use of hand-held camera shots, similar to those in the BOURNE IDENTITY movies, but like his latest movies, his movies are shot at a high frame rate. This makes the movie hyper-realistic, almost as if you’re watching a home video, not a cinematic movie. Additionally, the acting is only serviceable and the music commands the audience to feel or react rather than the story. This long and drawn out movie clearly needs some serious editing.

Finally, while BLACKHAT starts off promising, the ending is morally annoying. Thus, in the movie’s storyline, a team coming together to catch an evil terrorist, but by the end the movie turns into a story of vengeance and leaves no moral examples with the characters exhibiting no form of redemption. [SPOILERS FOLLOW] In fact, after enacting their revenge, the good guys (or those that survive) end up killing the antagonist and leaving with the money he stole. Thus, there’s no justice, no redemption and, honestly, no satisfying resolution. Along with some bursts of graphic violence, foul language and lewd content, BLACKHAT ends up being a major disappointment.