"He’s the Best Man that Money Can Buy" 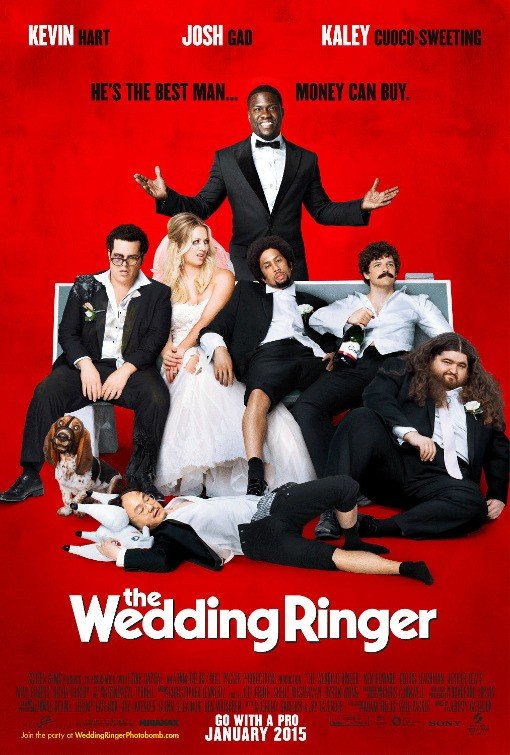 THE WEDDING RINGER follows Doug, a socially awkward, nerdy guy, who decides to hire Jimmy to provide best man services two weeks before his wedding to a beautiful woman named Gretchen. Doug fabricates the names and identities of a best man and the groomsmen. When all else fails, Doug seeks out Jimmy’s services to carry out a charade designed to make Doug look his best. However, the deceitful scheme threatens to ruin Doug’s wedding and relationship with Gretchen.

The cleaner comedy in THE WEDDING RINGER is sometimes very humorous. Kevin Hart and Joshua Gad as Jimmy and Doug are indeed pretty funny. That said, the movie also has a lot of crude, offensive comedy laced with abundant foul language that wasn’t that funny. In addition, despite some light moral elements extolling truth telling and friendship, THE WEDDING RINGER has a strong mixed pagan worldview with too much abhorrent, immoral content and behavior. It also contains some marijuana references and some jokes about God, Jesus and clergymen. Overall, THE WEDDING RINGER has some laugh-out-loud and all-too-brief touching moments, but it’s ultimately unacceptable viewing.

(PaPaPa, RoRo, B, Cap, FR, AbAb, LLL, V, SS, NNN, AAA, DD, MMM) Very strong mixed pagan worldview with some strong Romantic, idealized and selfish pagan views of romance, marriage, sex, and money, with some moral elements lauding truth-telling and true friendship, plus protagonist’s new friend runs a business providing best man services and is constantly motivated by making money in order to advance his business and wealth, but his business is based on deceit and thus is a false perversion of the traditional western, biblical view of free enterprise, and some overt anti-Christian elements where man pretends to be a priest, and priests are associated with child molestation in a “comical” reference or two about the infamous Catholic scandals regarding this same subject, plus some jokes about God and Jesus; at least 120 or more obscenities and profanities (including many “f” and “s” words and some GD words); brief violence, with a violent football scene that depicts men physically assaulting each other; strong sexual content and immorality includes crude references, a bachelor party scene depicting men getting sexually involved with strippers, stripper says she’s only 15, a bestiality joke, one situation refers to the priest child molestation scandals, and groom kisses another stripper, whom he falls for at the end; brief graphic nudity with a scene depicting male private parts and buttocks; heavy alcohol use and drunkenness, with several scenes depicting drinking and getting drunk, especially in bachelor party and airplane scenes; light smoking and illegal drug use, with two scenes showing characters smoking weed; and, very strong miscellaneous immorality, including the protagonist lying constantly throughout the movie about his best man and groomsman.

THE WEDDING RINGER follows Doug, a socially awkward guy, who decides to hire Jimmy to provide best man services two weeks before his wedding to a beautiful woman, Gretchen. Trying to look good, Doug has fabricated the names and identities of not only a best man, but of all his groomsmen as well. When his efforts fail, he seeks out Jimmy’s services to carry out a charade designed to make Doug look his best, but this scheme threatens to destroy everything if it fails.

The cleaner comedy in THE WEDDING RINGER is sometimes very humorous. Kevin Hart and Joshua Gad as Jimmy and Doug are indeed pretty funny, and most moviegoers will enjoy their comedic performances. In fact, the movie had the screening audience laughing almost the entire time.

That said, THE WEDDING HUMOR has a lot of crude, offensive comedy laced with abundant foul language that wasn’t that funny. Also, it makes a couple jokes about clergymen when the best man businessman dresses up as a priest. In fact, one of the bits involves referring to the child molestation scandals that hurt the Catholic Church. In addition to this and some references to marijuana use, the movie includes some jokes about God and Jesus.

Ultimately, THE WEDDING RINGER has a very strong mixed pagan worldview with strong Romantic and pagan elements. For example, Doug heavily idolizes and idealizes the concept of getting married to a gorgeous girl to the point that he irrationally spends tens of thousands of dollars on a fictional best man and groomsmen. He knows deep down he doesn’t love Gretchen but chooses to ignore that. So, rather than actually being in love with Gretchen, Doug is in love with the idea of getting married to a beautiful girl, a girl who, in reality, would never marry a nerdy guy like him. Thus, Doug and Jimmy’s fabrication of a best man, groomsmen and an enjoyable life is deeply driven by Doug’s obsession of impressing Gretchen. He never actually comes to the realization of how ridiculous the idea of paying a large sum of money for counterfeit friends truly is. Meanwhile, Gretchen also isn’t in love with Doug. Instead, she’s actually in love with the idea of marrying a guy who’s not jerk but who also has money.

Thus, although THE WEDDING RINGER does have some moral elements about truth telling and the importance of friendship, it doesn’t acknowledge and value a marriage between a man and woman as a sacred union that produces a covenant. In addition, though Jimmy is a businessman, his business is based on deceit and, hence, is a false perversion of the traditional western, biblical view of capitalist free enterprise.

THE WEDDING RINGER has a simple storyline and plot. In a comedy, moviegoers usually don’t want or expect a profound narrative that challenges them to think and analyze. The audience is also not supposed to develop a deep connection with the characters. Rather, a comedy is centered on the humor to create laughter and a pleasurable time for the audience. However, the best comedies (and the most memorable ones) are those comedies that do have something deeper to say and that do establish a deeper connection between the audience and the characters, especially the protagonist and his romantic interest, family, friends or colleagues.

Overall, THE WEDDING RINGER has some laugh-out-loud and all-too-brief touching moments, but it contains too much crude, excessive, abhorrent content to be acceptable, even with an extreme caution.