DRUNK STONED BRILLIANT DEAD: THE STORY OF THE NATIONAL LAMPOON 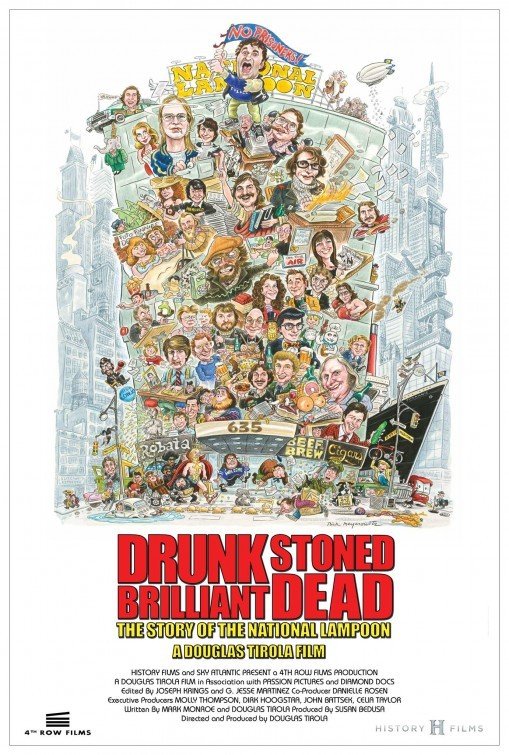 DRUNK STONED BRILLIANT DEAD: THE STORY OF THE NATIONAL LAMPOON is a raunchy documentary about the history of the wildly successful humor magazine, which began in the early 1970s. The magazine’s popularity led to such popular comedy movies as ANIMAL HOUSE and CADDYSHACK. The documentary is packed with images of the shocking humor for which the iconoclastic magazine became infamous. It’s also packed with images, film footage and audio recordings of such legendary comedy stars as John Belushi, Chevy Chase, Gilda Radner, and Bill Murray, most of whom became stars in both TV and movies. Two of the magazine’s writers went on to write for the long-running SIMPSONS TV show. Conservative humorist P.J. O’Rourke also wrote for the magazine.

DRUNK STONED BRILLIANT DEAD contains a fascinating history of comedy and pop culture in the 1970s and 1980s, including the influence that the magazine’s irreverent, crude humor had on today’s comedy. As such, the documentary is informative and entertaining. However, DRUNK STONED BRILLIANT DEAD has a strong pagan worldview with lots of excessive crude content and references to alcohol and drug abuse.

(PaPaPa, LLL, V, SS, NNN, AAA, DDD, MMM) Very strong pagan worldview about the iconoclastic humor magazine “National Lampoon”; at least 50 obscenities (mostly f” words) and 12 profanities; a couple of quick shots of violent photos or implied violence, including a famous shot of an Vietnamese man getting shot in head at point blank range which is turned into a sick joke and an image of a dog with a gun held to its head, saying it would be shot if the magazine isn’t purchased; strong sexual humor abounds throughout, mostly seen in images of the pages of the magazine being discussed; numerous shots of upper and full female nudity; images of alcohol use and alcohol abuse is discussed throughout; drug use and drug abuse are shown and discussed throughout; and, very strong miscellaneous immorality encompasses a wide array of images and shocking jokes in bad taste and it’s also made clear that the magazine finally collapsed under an advertising boycott after a Christian lobbying group protested a sacrilegious image in the magazine.

DRUNK STONED BRILLIANT DEAD is a raunchy, no-holds-barred documentary about the history of the wildly successful humor magazine “National Lampoon,” which led to such comedy movies as ANIMAL HOUSE, CADDYSHACK and NATIONAL LAMPOON’S VACATION. DRUNK STONED BRILLIANT DEAD is entertaining and informative, but has a strong pagan worldview with lots of crude content, foul language and sick jokes.

The National Lampoon was a magazine that sprang to life in the early 1970s, as an outgrowth of the Harvard Lampoon, a long-running, elite humor magazine on the Harvard campus. Funded by a well-heeled businessman with an admittedly sick sense of humor named Matty Simmons, the magazine reflected the no-holds-barred attitudes fostered by the anarchic decade of the 1960s. It introduced an entirely new generation of comedy stars to the world.

The documentary is packed with images of the shocking humor for which the magazine became infamous, and will likely be offensive to many discerning, media-wise viewers. However, it contains a fascinating history of comedy and pop culture over the course of the 1970s and 1980s, and the influence that sick humor had on the comedy of the present day.

The movie is also packed with images, film footage and audio recordings of such legendary comedy stars as John Belushi, Chevy Chase, Gilda Radner, and Bill Murray, all of whom went on to stardom on “Saturday Night Live.” A couple National Lampoon writers also went on to write and produce for the long-running THE SIMPSONS on Fox-TV. Conservative humorist P.J. O’Rourke also wrote for the magazine.

DRUNK STONED BRILLIANT DEAD is an impressive, entertaining, informative documentary about a major influence on contemporary media, but on a moral level, it’s excessive and unacceptable.