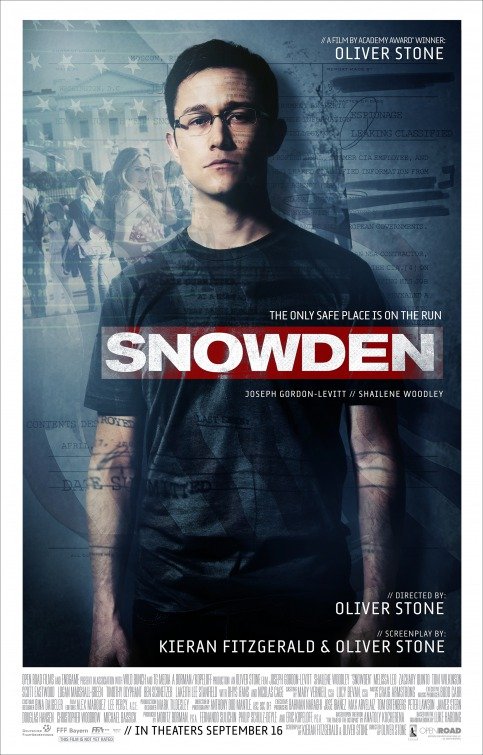 SNOWDEN is a drama directed by Oliver Stone about the famous former NSA contractor, Edward Snowden, who released classified data to journalists revealing the extent to which the American government spies on its citizens. The movie covers Snowden’s career and relationship with long-term girlfriend. It deals with the internal struggle he faces knowing how egregiously the government agencies where he worked appeared to be breaking the law and what he should do about it.

SNOWDEN is slickly directed and well acted, but dramatically flat. Thematically, Oliver Stone plays it safe when presenting Snowden’s side of the story. Stone shows Snowden as a red-blooded American with conservative leanings. Snowden goes from someone blindly following his leaders out of patriotic duty, to someone questioning his leaders, also out of patriotism. The movie makes it clear people don’t have to agree with their political leaders to be a patriot. However, the movie isn’t without some moral problems. Snowden lives with his girlfriend throughout the story. There’s a depicted bedroom scene between them, plus lots of strong foul language. So, MOVIEGUIDE® advises extreme caution for SNOWDEN.

(BB, Pa, PP, ACAC, LLL, V, SS, NN, A, D, M) Strong moral worldview of attempting to do what’s right, even if it puts your career, relationships and life in danger, and following laws higher than oneself (in this case, the Constitution of the United States [allegedly]), with some pagan lawlessness in that title character lives with his girlfriend, strong patriotic anti-totalitarian elements of not following leaders blindly, but holding them accountable to the law, while acknowledging that even whistleblowers must act in responsible manners; at least 42 obscenities (including 23 “f” words) and ten strong profanities; very light violence, including soldier breaks both legs in training; one scene of depicted sex with sensitive areas barely obscured by shadows, sexual references, voyeurism where men watch woman start to undress while spying through her computer camera, but cut it off pretty quickly, a meeting takes place in a strip club with women dancing in lingerie; upper female nudity seen in woman's self-portrait photography, upper male nudity, and strippers dressed in lingerie; moderate drinking; some smoking; and, some moral ambiguity and title character decides to give secret info to left-wing journalists.

SNOWDEN is a drama directed by Oliver Stone about famed former NSA contractor Edward Snowden, who released classified data to journalists revealing the extent to which the United States government was spying on its own citizens.

Beginning in June of 2013, Snowden (Joseph Gordon-Levitt) secretly calls three left-wing journalists, Glenn Greenwald and Ewen MacAskill from Britain and Documentarian Laura Poitras from America, to his Hong Kong hotel room, where Snowden has stowed away for multiple weeks. Holding a massive amount of government data, Snowden says he wants to explain who he is and why he did what he did. Also, at the journalists’ own discretion, he wants them to reveal to the public what the American government is illegally doing.

Snowden enlisted in the Army Reserve as a Special Forces candidate after 9/11 out of a sense of duty, but was discharged after breaking both his legs in training. Not too long after being discharged, Snowden decided to serve his country in another, more technical way, by joining the CIA as a computer professional.

It’s there that Snowden learns of the real future threat that the U.S. faces in cyber terrorism. Meanwhile, Snowden starts dating Lindsey, a pretty photographer with liberal ideologies that go against Snowden’s more patriotic worldview. Snowden eventually resigns from the CIA on principle and starts working as a contractor assigned to the NSA.

With the NSA, Snowden begins to see a fuller picture of the government’s surveillance system, and the extent to which it’s used. He learns the American government is spying on its own citizens more than any other country. So, he decides that the public needs to know about this spying, which he feels is illegal and unconstitutional. Amid all the secrecy, his professional and personal relationships are put on the line.

Back in Hong Kong, the journalists sift through the data with Snowden. They prepare to publish it with The Guardian newspaper in Britain, even though they know that, as soon as it goes public, Snowden will be perceived a traitor by the American government and will be sought out to be extradited and punished. The conversation grows as the general populous discusses whether Snowden’s actions are heroic or a betrayal.

SNOWDEN is slickly directed and well acted, but dramatically flat. The cuts between the hotel room in Hong Kong to Snowden’s back-story hinder adequate tension being built. The 2014 documentary about Snowden CITIZEN FOUR is arguably a more intense, more thrilling retelling of the story. Joseph Gordon-Levitt splendidly transforms his voice and physical mannerisms to those of Edward Snowden’s. However, the relationship between Snowden and Lindsey is uninteresting and distracts from the more thrilling aspects of Snowden’s story.

Thematically, Oliver Stone plays it safe when presenting Snowden’s side of the story. Showing him as a red-blooded American with conservative leanings, Snowden goes from someone willing to blindly follow his leaders out of patriotic duty, to someone questioning his leaders, also out of patriotic duty. The movie makes it clear that you “don’t have to agree with your politicians to be a patriot.” Snowden doesn’t take party sides, especially since the spying started under the Bush administration and continued under Obama. While viewpoints will differ on Snowden himself and whether he put the safety of Americans in jeopardy, the general viewpoint and worldview of SNOWDEN the movie is patriotic and anti-totalitarian.

However, the movie isn’t without some moral problems. Snowden lives with his girlfriend throughout the story, and there’s one depicted sex scene between the two. There’s also lots of strong foul language. Thus, SNOWDEN is too excessive for many media-wise viewers and requires extreme caution.