THE GIRL ON THE TRAIN

"Endless Train Ride to Repugnant Boredom – Don’t Board This Train" 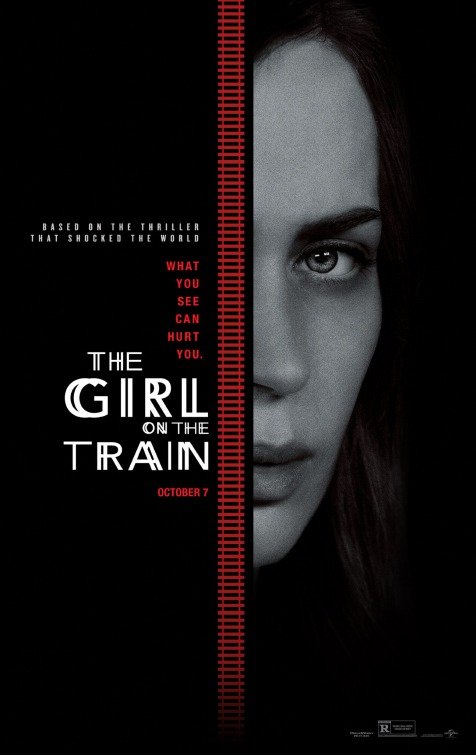 THE GIRL ON THE TRAIN is a mystery, suspense thriller based on the popular 2015 novel. Rachel is a divorced alcoholic who spends her days riding a train. The train runs past her old home where Rachel’s ex-husband Tom lives with his new wife, Anna, and their baby. Two houses down from Tom and Anna lives a young couple who Rachel believes embody perfect love. Rachel observes them every day as the train passes their house. When Rachel sees the woman cheating on her husband, she grows angry. In a drunken stupor, Rachel expresses a desire to hurt her. The next day, Rachel finds out the woman is missing. She fears she might have done something awful.

THE GIRL ON THE TRAIN is badly paced. The mediocre twist at the end is only somewhat thrilling, because the filmmakers have cheated. Morally, nearly every character is repugnant. Also, nobody takes responsibility for their own moral failings, choosing to blame others instead. These moral problems, along with lots of strong foul language and multiple lewd scenes, make THE GIRL ON THE TRAIN excessive and unacceptable.

(PaPa, FeFe, B, LLL, VVV, SS, NN, AAA, MM) Strong pagan worldview of characters acting immorally and shifting blame on others instead of taking moral responsibility, with some grotesque celebration of violence, plus strong feminist undertones where male characters (though deplorable) practically take the blame for some of the women’s immoral choices and a light moral element of a woman rebuilding herself in the end and learning not to be manipulated by others or by alcohol; at least 55 obscenities (including about 50 “f” words) and 7 profanities; strong violence includes woman hit in face, woman’s head is smashed against the floor, woman is pushed against a rock and hits head, and then has her skull crushed by a rock, man is stabbed in the neck by a corkscrew, angry woman then screws it deeper into the mans neck, it’s implied that a baby drowns in a bathtub; several moments of depicted sex between married couples and unfaithful spouses, though each depiction is a flashback and lasts around five seconds long, and woman seduces her therapist by pulling up her skirt; upper female nudity of woman in shower, rear female nudity of woman jumping out of bathtub and upper male nudity; strong alcohol use with many scenes of drunkenness; no smoking or drug use; and strong miscellaneous immorality such as vengeance, unbridled anger and lying.

THE GIRL ON THE TRAIN is a mystery, suspense thriller based on the 2015 novel about an alcoholic woman who obsessively observes people from a train.

Rachel Watson (Emily Blunt) is a divorced alcoholic, who spends her days riding a train. The train runs right past her old home where Rachel’s ex-husband Tom lives with his new wife, Anna, and their baby. Two houses down from Tom and Anna lives a young couple who Rachel believes embody perfect love. Specifically interested in the young woman, Rachel observes them every day as the train passes their house.

One day, however, Rachel sees that the woman she idolizes, Megan, is cheating on her husband. This betrayal infuriates Rachel, who drunkenly vows to punish Megan for throwing away her marriage. On her way home, Rachel leaves the train and starts walking towards Megan’s house.

The next morning, Rachel wakes up with a terrible hangover and blood on her head and shirt. As usual for when she gets drunk, she has no memory of what happened the night before and all the blood makes her fear she might have done something awful. Detectives show up at her home to tell her Megan is missing, so Rachel’s fears that she may have murdered Megan grow even stronger.

(SPOILERS) As the movie progresses, the story jumps around, showing Megan’s struggle with her marriage, her liaisons with her therapist, and her grief over a tragedy that happened when she was 17. Also, it’s revealed Rachel’s alcoholism began after she and Tom found out she couldn’t have children. The booze took over her life, which they attribute to ruining their marriage. (SPOILERS END)

However, as Rachel begins to put the puzzle pieces together, she learns that she may not be as broken as she thought and may not be the killer.

THE GIRL ON THE TRAIN’s marketing boasts crazy twists and turns, and promises shock and awe. While the twist at the end is somewhat surprising, Director Tate Taylor fails to build suspense while the story moves forward. Worse, the final twist is only amplified because Taylor deceived the audience with several fabricated shots. The movie’s non-linear storytelling contains too many time jumps and tries to make simple plot points intriguing, but these qualities hinder the movie’s pacing. That said, Emily Blunt plays the tortured soul of Rachel brilliantly, though her character is just a tad too unlikeable at the beginning.

Morally, nearly every character in this mystery thriller is repugnant. The men are all sex-craved control freaks with bad tempers, and the abused women drown their pain by either indulging in affairs or alcohol. By the end, Rachel rebuilds herself by learning not to be manipulated (a good thing), but seems to blame all her alcohol problems on her deplorable ex-husband, Tom. In the same way, Megan’s infidelity is explained away due to a legitimate tragedy that affected her when she was younger. Ultimately, no characters take responsibility for any of their mistakes. This, of course, is an ethically weak worldview, with destructive feminist leanings.

These moral problems, along with an excessive amount of foul language, graphic scenes of violence and multiple lewd scenes, make THE GIRL ON THE TRAIN excessive, unacceptable movie with some repugnant elements. Thus, discerning moviegoers probably should ignore the hype and take another train to satisfy their desire for cinematic entertainment.