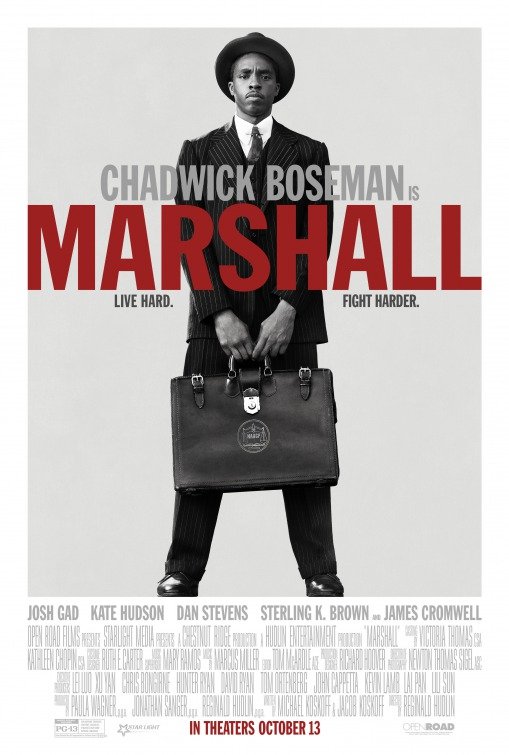 MARSHALL is a courtroom drama about a criminal case Thurgood Marshall fought for the NAACP, before he became the first African-American Supreme Court Justice. A successful lawyer for the NAACP, Thurgood is sent to Connecticut to defend a black man accused of raping a wealthy white woman. The judge on the case refuses to let Thurgood speak during the court proceedings. So, Thurgood must rely on his new partner, Sam Friedman, a Jewish insurance lawyer with no criminal case experience, to speak for the defense.

MARSHALL is a compelling courtroom drama with great acting. However, the writing of Thurgood is a bit lackluster and fails to reveal the man behind the well-known figure. One problem with MARSHALL is that it reveals little about the opinions and philosophies of the Thurgood Marshall that became a Supreme Court Justice. So, while MARSHALL is an engaging movie, and a positive story about fighting racism and injustice, it oversimplifies the man himself. Thus, the movie ultimately does a disservice to history. MARSHALL also has some strong foul language and other explicit content. MOVIEGUIDE® advises extreme caution.

(BB, PCPC, RH, Ho, LL, VV, SS, N, AA, D, M) Strong moral worldview about fighting for the disenfranchised, innocent, and revealing the ugliness of racism; politically correct statement about the U.S. Constitution not being for all people; 16 obscenities (including three “f” words) and eight profanities (many GD’s); men are beat up and threatened by racist men, man tells a horrific story about his testicles being cut while running away from men, and depicted rape; depicted adulterous sex while clothed, depicted rape scene, married man flirts with women, some passionate kissing, and it’s implied two men at a club are homosexual; upper male nudity, woman appears in her underwear; moderate drinking; smoking; and, racism but rebuked.

MARSHALL is a court room drama about a case that Thurgood Marshall fought for the NAACP, before he became the first African-American Supreme Court Justice. A fairly engaging court room drama, MARSHALL is well acted and directed, but Marshall himself is written more as a caricature instead of an honest, deeper look into a prominent figure in American history.

In the 1940s, Thurgood (Chadwick Boseman) works for the NAACP as a defense lawyer for black men and women whom they believe are innocent, but who are accused of crimes because of the color of their skin. Thurgood is sent to Connecticut to defend Joseph Spell (Sterling Brown), a chauffeur accused of raping and attempted murder against his wealthy employer, Eleanore Strubing. In order to be admitted into court in a different state, the NAACP asks an insurance lawyer, Sam Friedman (Josh Gad), to take the case and request that Thurgood be allowed to join the defense team. However, the tough judge says Thurgood can be on the defense team for the benefit of appearing fair, but he won’t allow Thurgood to utter a word during the case.

Thurgood is furious at the discrimination from both the prosecution and the judge, but he’s adamant at equipping Sam to handle the court proceedings, even though Sam has never done a criminal case. As the two begin to investigate the testimony of Joseph’s accuser, Eleanor, they see she’s clearly lying about many things. However, they also realize that their client Joseph is also lying about something he said in a sworn statement. Will they be able to find the truth?

MARSHALL is a compelling courtroom drama with great acting from Josh Gad, Sterling Brown and Dan Stevens. Chadwick Boseman is terrific as the smooth talking, stylish Thurgood Marshal, but the writing of Thurgood is a bit lackluster and fails to reveal the man behind the well-known figure.

One problem with MARSHALL is that the case that the movie is about reveals little about the opinions and philosophies of the Thurgood Marshall who became a Supreme Court Judge. In one particular scene, Thurgood states to the media that “the constitution was not written for us [African-Americans],” implying that the constitution itself is racist, but that he will use it nonetheless. This progressive, and false view that the constitution is a living document that evolves with the times, instead of serving as a basic declaration of freedom for all people was one of Thurgood Marshall’s troubling philosophies that led to Marshall being instrumental in codifying abortion into law through Roe v. Wade.

It’s a mixed bag, because Thurgood Marshall did so much good as a lawyer defending the freedom of black men and women, and won a staggering 28 battles out of 32 in the Supreme Court, and as a judge was instrumental in abolishing segregation in schools. On the flip side, because of a skewed view of the constitution, he also frequently ruled in decisions that directly go against the rule of law, because of his personal opinion. African-American author and professor Ellis Washington critiques his Marshall’s ideology, saying, “Ironically, Justice Marshall’s racialist and activist understanding of the Constitution as a vehicle for social change, most times caused him to ascribe to a Machiavellian, ‘the end justifies the means’ approach to constitutional interpretation. A judicial interpretation in the words of Justice Scalia leaves the Constitution to the tyrannical whims “as THEIR personal preferences dictate” (see “A critique of Justice Thurgood Marshall” by Ellis Washington, at http://www.wnd.com/2008/04/61976/).

So, while MARSHALL is an engaging, and even positive story about fighting racism and injustice, it oversimplifies the man himself. Thus, the movie ultimately does a disservice to history.

MARSHALL also has plenty of foul language and some depicted sexual content. Consequently, MOVIEGUIDE® advises extreme caution. The filmmakers should have considered toning down the movie’s objectionable content if they truly wanted their movie to reach a wider, and especially younger, audience.