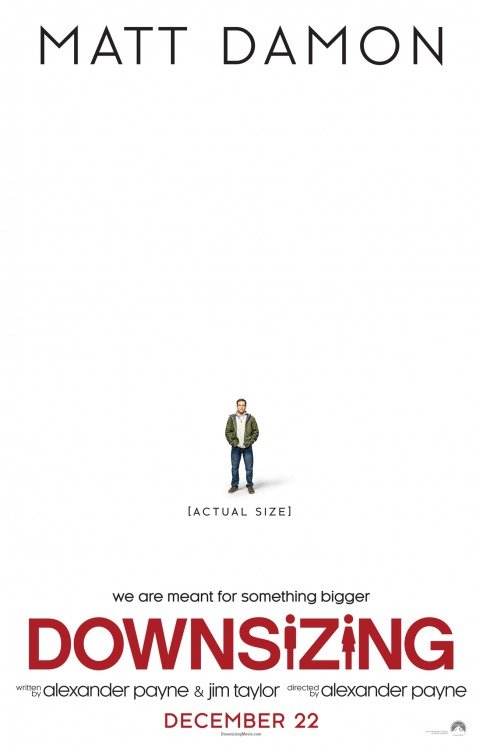 DOWNSIZING is a very funny but often excessive satire. Paul, an occupational therapist in Omaha, Nebraska, decides to let scientists shrink his body down to five inches so he can live a more wealthy life, with less impact on the environment. However, Paul’s wife chickens out at the last minute. So, now Paul is all alone in a large apartment complex. Paul begins an affair with a Bible-carrying, charismatic Vietnamese Christian who was downsized against her will. He gets sucked into another environmentalist cult deciding to wait out the Apocalypse for 8,000 years inside a mountain. Will Paul come to his senses? Will love prevail?

DOWNSIZING is an incredibly well-directed movie. It constantly surprises the viewer. The plot points and character arcs are extremely well executed. The humor comes fast and overtakes the audience at unique moments, mixed with jeopardy and pathos. Regrettably, the movie is excessive in showing some of the elements it wants to satirize, including sex, nudity, and drug use, combined with lots of strong foul language. DOWNSIZING is a brilliant, insightful movie, but media-wise viewers should be extra careful.

Dominant Worldview and Other Worldview Content/Elements:
Light Christian, moral worldview includes a very strong satire of gullible, cultic environmentalism with many hedonist and amoral characters, and a hero who is a gullible, pathetic, easily deceived fool, and one woman who changes and solves the plot problem who’s a Vietnamese, charismatic, Bible-carrying but flawed Christian.
Foul Language:
32 obscenities (mostly “f” words, but one string of “f” words was slightly rebuked but also used by the rebuke) and six profanities (two about Jesus, one of which is rebuked).
Violence:
Discussions of intense violence, including a downsizing man’s head blew up in the process because he had gold fillings, people having their fillings and false teeth and caps before downsizing, people dying of cancer.
Sex:
Strong sexual content overall includes discussions of easy women in downsized community, large drug party with lots of sexual activity, implied fornication is also discussed afterwards.
Nudity:
Full male nudity in several places as people are downsized and upper female nudity at large drug party.
Alcohol Use:
Alcohol use.
Smoking and/or Drug Use and Abuse:
Smoking and excessive hallucinogenic drug use with main character hallucinating to his own detriment, and excessive painkiller and opiate drug use with another character stealing painkillers and another woman dying of cancer overdoses on painkillers.
Miscellaneous Immorality:
Much discussion of apocalyptic environmental scenarios, painful divorce, Serbian fixer, and primary character breaks secondary character’s artificial leg.

DOWNSIZING is a very funny but often excessive satirical expose of cultic environmentalist groups and the gullible people who follow them, with a positive Christian character who solves the movie’s plot problem. The filmmaking is incredibly real and yet hilarious.

DOWNSIZING opens in a laboratory in Norway, with a doctor shrinking a mouse. Next, it cuts to a conference on overpopulation in Istanbul, when everyone is surprised by the tiny downsized speaker, who was the inventor of downsizing in order to solve the problem of overpopulation. He’s been able to shrink people with no adverse side effects, 2,744 to one. The only danger of death occurs in one out of 250,000 people. Since all clothing is removed when someone is downsized, there is full nudity in several scenes.

The first group of downsized people appear at the overpopulation conference, and people groups around the world watching TV are in awe of what happened. This group in Norway forms an agrarian downsized community.

Meanwhile, Paul, an occupational therapist in Omaha, Nebraska, is taking care of his mother dying of fibromyalgia. At his catholic high school reunion, he and his wife, Audrey, talk to one of his classmates who has been downsized. Downsizing not only supposedly improves the environment (one year of human waste can fit in one large garbage sack), but it also stretches your money. So, with Paul’s savings of $250,000, they can live like multimillionaires.

Paul and Audrey decide to go to Leisureland to downsize. Leisureland is a Disney World perfect community. When Paul gets called in for downsizing, he has to remove all his false teeth, and nurses shave all the hair on his body.

When he wakes up, he finds Audrey decided not to be downsized. She calls him from the airport. When he protests, she harangues him about how bad she feels and urges him not to make her feel any worse.

Now, Paul is all alone in a large mansion. He moves into an apartment and eventually dates a not-so-attractive single mother, who rejects him. Upstairs from his apartment is a raging party every night, being conducted by Dusan, a Serbian, who’s realizes he can make money selling alcohol, cigars and illicit drugs. Paul goes up to the party and gets shamed into kissing the woman who passes on a blue pill. After throwing up, he spends the rest of the party hallucinating while orgiastic hedonists party all around him.

The next day, the cleaning people come. One of them is Ngoc Lan, a Vietnamese dissident downsized against her will when she was in a Vietnamese prison. She lost her lower leg when she was escaping with other illegal immigrants to America in a Chinese TV box. She has organized the poor people in the downsized community into cleaning crews.

Paul, an occupational therapist, sees how pained she is from her artificial leg. He also sees her taking painkillers and heavy opiates to bring back to the impoverished community beyond the wall. He says he can adjust her leg right there, but she tells him he can come with her. Her roommate needs a doctor. Paul goes with her and finds out many of the opiates are for her cancer ridden roommate, who later dies of an overdose. Her roommate’s husband died because his head exploded during the downsizing because of his gold fillings.

Paul accidentally breaks her artificial leg while fixing it. Feeling guilty, he takes her place as a cleaning person. When Dusan sees him, he tells Paul he’s pathetic, which is true. He is a nice guy but pathetic.

Ngoc Lan takes Paul to a charismatic church, where she prays and seems to sing in tongues. She rebukes him for using the name of Jesus as a curse word. She attributes everything that happens in her life to Jesus and thanks God.

Dusan and his friend, Conrad, talk Paul into going to Norway to bring cigars and alcohol to the original community. Ngoc Lan convinces them to bring her with them.

The original downsized creator says the human beings are going to be in the fifth stage of extinction because of climate change, pollution or war. So, the original community has dug miles into the earth to set up a community that can survive this apocalyptic extinction. Paul decides to go with them. He asks them how long it’s going to be. They tell him 8000 years.

The problem is, that Paul and Ngoc Lan have had a sexual affair. Ngoc Lan, using the “f” word, challenges Paul, asking him whether their sex was one of several different varieties of the “f” word sex or whether it was love.

Dusan thinks this downsized community is a cult. Ngoc Lan, Dusan and Conrad stay behind while Paul goes into the mountain after Ngoc Lan gives Paul her Vietnamese Bible. Paul says he can’t read it, but Ngoc Lan insists.

Will the world go on? Will Paul come to his senses? Will love prevail? How can these people escape the clutches of the environmentalist cult? Those are the questions proposed by the movie for all of us.

DOWNSIZING is an incredibly well-directed movie. It is constantly surprising the viewer. The plot points and character arcs are extremely well executed. The humor comes fast and overtakes the audience at unique moments. The humor is mixed with jeopardy and pathos. The orchestration is well done.

Regrettably, the movie is excessive in showing some of the elements it wants to satirize, such as the naked people being downsized, the hedonistic drug party and the excessive use of the “f” word in a very intense manner.

On the other hand, Ngoc Long is a very sincere Christian. The church service is very powerful. Also, the Bible provides the solution to the plot problem, even though it’s in Vietnamese.

DOWNSIZING is on the border of extreme caution and excessive. The satire reminds one of Jonathan Swift of GULLIVER’S TRAVELS, who was also excessive but very funny.

Many people may not get the satirical humor, so beware. Even so, DOWNSIZING is a brilliant, insightful movie about gullible mankind.