"The Life and Times of a Force of Nature" 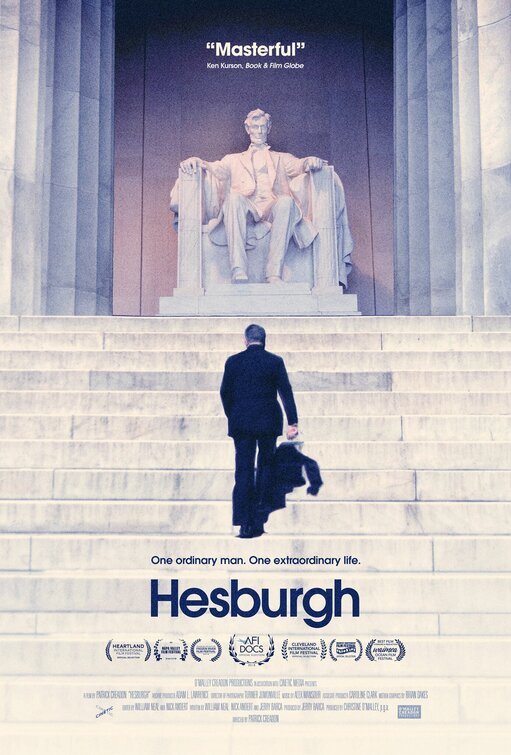 HESBURGH is a documentary recounting the remarkable life story of Father Theodore Hesburgh, a civil rights advocate who wielded tremendous power as head of Notre Dame University from 1952 to 1987. The movie is narrated by readings from Hesburgh’s journals recounting his intimate thoughts from a remarkable life where he was close friends with not only Pope Paul VI but six American presidents. HESBURGH packs a lot of fascinating stories into its 106-minute running time, spotlighting a man that people might otherwise forget since his death at age 97 in 2015.

Director Patrick Creadon moves things at a rapid yet manageable clip. He packs in as much of Hesburgh’s story as possible, using a stunning array of historical footage and photos. Aside from its wondrous use of historical footage and photos, the two best elements of HESBURGH are its narration and musical score. HESBURGH offers an engaging, entertaining look back at the biggest events of the 20th Century’s second half. As such, it’s highly recommended viewing for teenagers and adults. There are two GD profanities from President Richard Nixon in the movie, so caution is advised.

(CC, BB, PC, L, VV):
Dominant Worldview and Other Worldview Content/Elements:
Strong Christian, moral worldview in a documentary recounting the remarkable life story of Father Theodore Hesburgh, who wielded tremendous spiritual and political power as the head of Notre Dame University, but with some politically correct elements as Hesburgh was involved in some liberal political causes as well
Foul Language:
Two uses of “GD” are heard by President Richard Nixon, and these are subtitled along with the rest of Nixon’s comments for clarification
Violence:
Historical footage of a US nuclear bomb detonating on Japan, and photos and video of dead student at Kent State University after he was shot by National Guard, with big pool of blood visible in photos and video
Sex:
No sex
Nudity:
No nudity
Alcohol Use:
No alcohol use
Smoking and/or Drug Use and Abuse:
No smoking or drugs; and,
Miscellaneous Immorality:
Nothing else objectionable.

HESBURGH is a documentary recounting the remarkable life story of Father Theodore Hesburgh, a civil rights advocate who wielded tremendous spiritual and political power as head of Notre Dame University from 1952 to 1987. HESBURGH has a strong Christian, moral worldview, but contains some politically correct elements because Hesburgh was involved in some liberal political causes.

The movie is narrated throughout by readings from Hesburgh’s journals (by Maurice LaMarche) recounting his intimate thoughts from a remarkable life in which he was close friends with not only Pope Paul VI but six U.S. presidents ranging from Dwight D. Eisenhower to Ronald Reagan. Those friendships enabled him to have great influence on policies ranging from the U.S. nuclear arsenal to civil rights. HESBURGH makes it clear he was also a passionate thorn in the side of all those figures as well when he felt it necessary.

Opening with photos of his childhood in Syracuse, New York, it is made clear early on that Hesburgh had a tightknit family and was particularly close to his sister Mary. Born in 1917, Hesburgh knew from the age of 6 he wanted to be a priest, during an era where the clergy was a heroic field to join.

Hesburgh began his career as a military chaplain, but in 1952 received the order to become the president of the University of Notre Dame. The college wasn’t well-respected when he entered, so he opted to “shake things up” by placing more focus on academics rather than just the school’s famous Fighting Irish football team and by ousting deans and faculty upon arrival.

While most priests were averse to fundraising, Hesburgh had a gift for mingling with the rich and powerful and quickly turned Notre Dame into a major national force. Aside from fundraising, his outspoken opinions on the morality of sociopolitical issues inspired President Eisenhower to appoint him to a civil rights commission that developed much of what became the Civil Rights Act of 1964 and also enabled him to serve as an informal mediator between the U.S. and the Soviet Union amid massive tensions.

Throughout, Hesburgh drew controversy for many of his stances, particularly from the Vatican when he refused to bow down to strong new rules that sought to limit what Catholic universities could teach or comment on in classrooms. He tried to establish a balance between academic honesty and spiritual purity that would eventually set an example for other Catholic colleges.

His final controversy came when he publicly approved of Notre Dame’s invitation for President Barack Obama to deliver a commencement address in 2009. Because of Obama’s openly pro-choice stance on abortion, many Catholics considered the invite to be morally inappropriate, but Hesburgh not only endorsed the speech but was commended by Obama while seated in the front row.

HESBURGH packs a lot of fascinating stories into its 106-minute running time, spotlighting a man that many might otherwise forget in the time since his death at age 97 in 2015. Director Patrick Creadon moves things at a rapid yet manageable clip in order to pack in as much of his amazing tale as possible, using a stunning array of historical footage and photos throughout. In fact, the movie often feels like a real-life version of FORREST GUMP or Woody Allen’s ZELIG because of the incredible array of famous figures Hesburgh interacted with en route to effecting major change in both America as a whole and Catholic universities’ interactions with the church government in the Vatican.

There are some highly effective quieter moments as well, as Creadon shines a light on Hesburgh’s relationships with his students. Many recall that, if his office light was on at 2 a.m., Hesburgh didn’t mind if students climbed the fire escape to come speak with him.

The most emotionally stirring tale comes from famous journalist and author Robert Sam Anson, whose close friendship with Hesburgh as a student paid off when the priest personally called Pope Paul VI to negotiate on Anson’s behalf when the writer was captured by Cambodian forces while on assignment there during the Vietnam War. Anson was released after three weeks and acknowledges that Hesburgh’s call to the pontiff saved his life.

It might be easy to label Hesburgh as politically liberal, but the movie also makes it clear that his views were more complicated than that. For instance, he instituted policies to limit student protests during the Vietnam War that forced suspensions or expulsions upon those who would not stop after being given a 15-minute warning to disperse. Many other colleges nationwide followed his lead in order to quash dissent and restore order to their campuses. Also, in 1979, President Jimmy Carter appointed Hesburgh to be part of a commission on immigration reform, where Hesburgh supported the commission’s finding that reforms can only succeed if the border is secured first. However, Hesburgh also served on the advisory board of People for the American Way, a radical left-wing Anti-Christian group favoring illegal immigration.

Aside from its wondrous use of historical footage and photos, the two best elements of HESBURGH are its narration and musical score. Maurice LaMarche makes the recollections of Hesburgh come alive in compelling fashion, while composer Alex Mansour applies a boisterous jazz score to underscore the fast-paced life and times of an international force of nature.

As a history of one man who used his life in a quest for what he deemed positive social changes, HESBURGH offers an engaging, entertaining look back at the biggest events of the 20th Century’s second half. As such, it’s highly recommended viewing for teenagers and adults. There are two GD profanities from President Richard Nixon in the movie, so caution is advised.