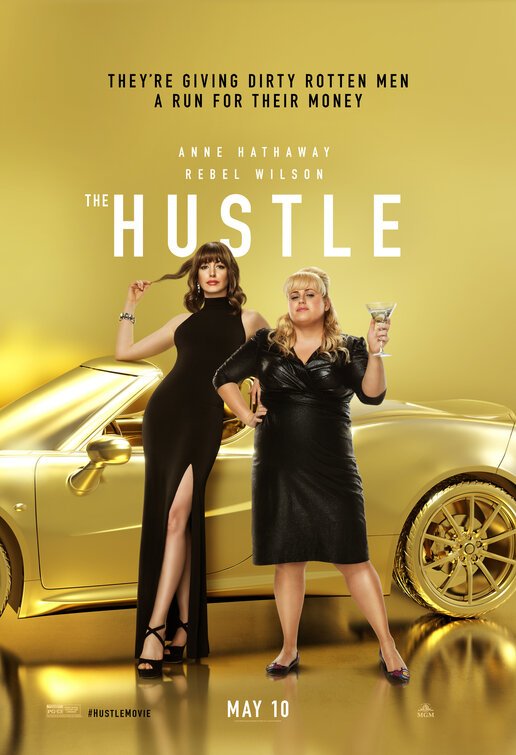 THE HUSTLE is the comical story of two female scam artists, one low-rent and the other high-class, who target men. Penny is an American con woman who travels to Europe to ply her illicit trade. She runs into a British con woman, Josephine, who sees enough spark in Penelope to think she could be competition. Eventually, the two women decide to see who can make $500,000 first off a wealthy younger man. An elaborate series of tricks ensues, with unexpected further twists along the way.

THE HUSTLE is a fun escape that tries to be entertaining on its own terms. It’s not the most original movie, but its zippy way with a storyline that’s survived 55 years with two prior adaptations makes for successful entertainment. Anne Hathaway and Rebel Wilson excel as the two con women. The movie is marred by numerous sexual innuendoes and jokes, though none are particularly graphic. The casual attitude toward sex is off-putting, however. Also, THE HUSTLE has a strong pagan worldview where there are no real consequences for the immoral, illegal behavior of the two con women.

(PaPaPa, Ho, LL, V, S, N, A, MM):
Dominant Worldview and Other Worldview Content/Elements:
Very strong pagan worldview in a story about two female scam artists, one low-rent and the other high-class, who team up to take down the men who have wronged them, with no real negative consequences for illegal and immoral behavior, plus some homosexual references regarding a major supporting female character who’s joked about being a lesbian and another woman makes several jokes about what it would take to seduce her
Foul Language:
Five obscenities (an “f” word is also mouthed but blocked by noise), three strong profanities and five light exclamatory profanities
Violence:
Extremely farcical slapstick fighting, tripping, falling, and pushing, one sequence where ridiculous “torture” inflicted by one con woman on the other to try and make her blink when she’s pretending to be blind, one con woman punches a man in his throat, which is played comically as he gasps and talks afterwards, and one con woman repeatedly tries to evade arrest from police and security guards
Sex:
Promiscuous behavior is implied by jokes at several points when characters make wisecracks about what they would or wouldn’t do sexually to get ahead in a con, fornication implied in an airplane bathroom during a flight where the rendezvous is shown by the bathroom door bumping and turning from “vacant” to “occupied” repeatedly, man waits for a woman at a bar and admits he’s only hoping to have sexual relations with her, and con woman tries to seduce a man as part of her main contest with another con woman, but nothing happens
Nudity:
Man stands shirtless as he tries to lure women and several lustful photos of women with large breasts are shown in close-up on a dating app
Alcohol Use:
Alcohol use
Smoking and/or Drug Use and Abuse:
No smoking or drugs; and,
Miscellaneous Immorality:
Two con women and one of the men they encounter are constantly trying to steal and trick each other and other innocent victims out of money, jewelry and other valuables, but there are no real consequences legally to their actions.

THE HUSTLE is the comical story of two female scam artists, one low-rent and the other high-class, who team up to take down the men who have wronged them. THE HUSTLE has its fun, entertaining moments, but it has a strong pagan worldview with some foul language and lewd content, where there are no real negative consequences for illegal and immoral behavior.

The movie opens by following an American con woman named Penny (Rebel Wilson), who crassly tries to con men out of $500 at a time by meeting them for dates via the Tinder app and being nowhere near as attractive as the photos in her app profile. She then tells the men she’s a friend of the more beautiful woman they were expecting and is collecting $500 to pay for breast augmentation surgery for the woman they had hoped to meet. Improbably, one man after another falls for this scheme, leading to Penny running from police and guards.

Penny then picks up an ad for travel in France and is next seen using her devious wiles to land cheap plane tickets, VIP train seating and more. It’s on one such train that another con artist, a British woman named Josephine (Anne Hathaway), overhears Penny in action. She specializes in major rip-offs costing her victims hundreds of thousands of dollars, but sees enough spark and rude sass in Penelope to believe she could pose a competitive threat to her.

Sure enough, Penny repeatedly manages to get to Josephine’s potential victims faster than she. Josephine responds by getting Penny tossed back to the United States through the help of a lesbian cop who’s her friend. However, Penny surprises them both by coming back and arriving at Josephine’s large estate and begs to be trained how to be a great con artist before they team up.

However, Josephine’s hard-driving, unfair orders break Penny’s spirit, until Penny finally turns the tables on her. At that point, the two women decide to see who can make $500,000 off a wealthy younger man (Alex Wolff). An elaborate and usually series of tricks ensue, with unexpected further twists along the way.

THE HUSTLE is making waves as a female-lead reboot of the 1988 Steve Martin-Michael Caine hit DIRTY ROTTEN SCOUNDRELS and the earlier 1964 David Niven-Marlon Brando comedy BEDTIME STORY. It could be dismissed easily as an example of Hollywood’s creative weaknesses these days, where far too many movies are sequels, remakes or reboots that put only a slight twist on the premises of popular past movies. However, the star power and talent of Wilson and Hathaway help keep THE HUSTLE buoyantly funny on its own terms.

Director Chris Addison slips up on occasion with the physical comedy bits, as they seem strangely paced and a little bit slow in execution in some scenes. However, Rebel Wilson helps save the day with her unique energy and personality.

Overall, THE HUSTLE is a fun escape that tries to be entertaining on its own terms. It’s not the most original movie, but its zippy way with a storyline that’s survived over 50 years and two prior adaptations makes it fairly entertaining.

That said, the movie is marred by numerous sexual innuendoes and jokes, but none are particularly graphic in and of themselves. The casual attitude towards sexual relations is a bit off-putting. Most of the time, though, the two women’s the characters’ actual actions and results regarding sex are not as overtly portrayed as are their verbalized intentions. Josephine has another friend and partner in crime who’s a lesbian policewoman. The character doesn’t dwell on her sexual identity or lifestyle. Rather, she dryly acknowledges it in brief comments or sarcastic looks when Penny tries to make jokes about it.

Finally, THE HUSTLE has a strong pagan worldview where there are no real consequences, legally or practically, for the immoral, illegal behavior of the two con women.