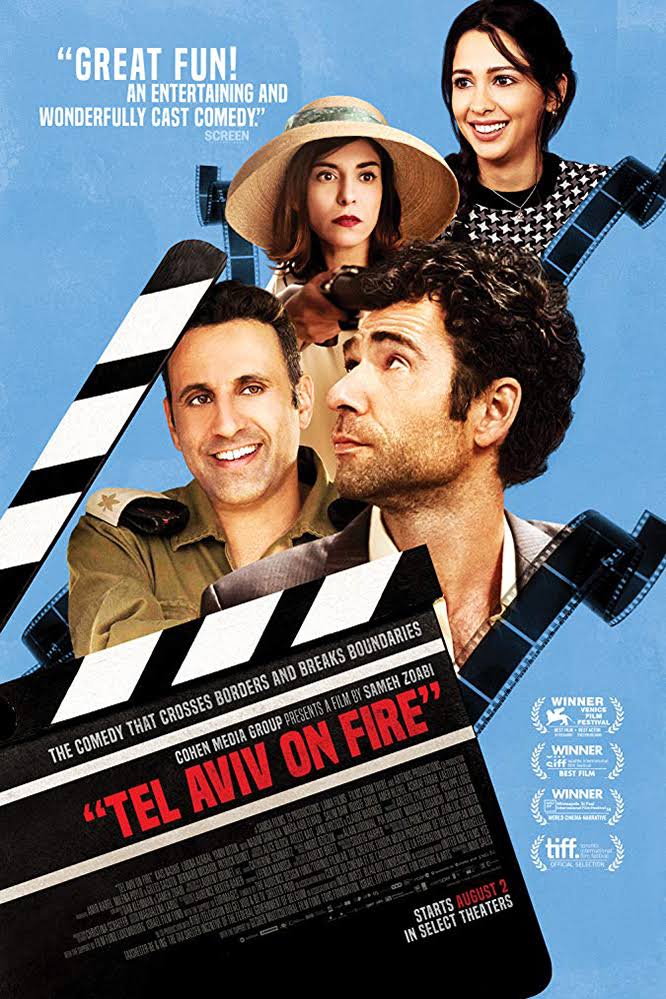 TEL AVIV ON FIRE tells the modern-day story of Salam, a quiet, unassuming Palestinian man who lives in Jerusalem but works in the West Bank territory for his Uncle Bassam’s cheesy, yet popular, soap opera. The program’s set in Tel Aviv during the Six Day War of 1967. Salam helps with the program’s Hebrew dialogue since he speaks the language well. As the show runs into trouble with the writer, Salam is promoted to the program’s head writer. He finds an unlikely writing partner in an Israeli commander at the checkpoint he passes through twice a day. The challenge for Salam is to maintain a storyline that will keep his uncle, the actors and the commander happy while Salam hopes to rekindle an old romance.

TEL AVIV ON FIRE is very clever and engaging, with realistic characters. The movie includes light offensive language, smoking and alcohol use. It tries to provide a political balance, but leans toward being Pro-Palestinian, with a Romantic Non-Christian worldview. TEL AVIV ON FIRE also has some brief foul language and violence. So, MOVIEGUIDE® advises caution for older children.

(Ro, Ab, B, L, V, A, D, M):
Dominant Worldview and Other Worldview Content/Elements:
Romantic worldview contends Palestinians and Israelis can get along but the “Zionist” system in Israel is flawed and prevents that from happening, but the main character desires to help others achieve their goals in a moral fashion;
Foul Language:
Six obscenities;
Violence:
One scene includes a kidnapping and holding the main character at gun point, the concept of the soap opera includes violence in its language even though it’s more of a romantic story, the Commander says the phrase, “So, the General shoots a few children…”;
Sex:
No sexual content;
Nudity:
No nudity;
Alcohol Use:
Some alcohol use;
Smoking and/or Drug Use and Abuse:
Cigarette smoking in a few scenes; and,
Miscellaneous Immorality:
An Israeli commander kidnaps the lead character to force him to write a particular ending to a Palestinian TV soap opera that’s also popular among Israelis.

TEL AVIV ON FIRE is an international production in Arabic and Hebrew that tells the modern-day story of Salam, a quiet, unassuming Palestinian man who lives in Jerusalem but works for his Uncle Bassam in Ramallah in the West Bank territory. Uncle Bassam produces a cheesy, yet popular soap opera, “Tel Aviv on Fire,” which is set during the Six Days war of 1967. The main characters are a Palestinian woman, Manal aka Rachel, her handler, Marwan, and an Israeli, General Yehuda Edelman. Manal is tasked with stealing secrets from General Edelman and to kill him if necessary. Against her better judgment, Manal falls in love with the general. Although the program has gained popularity in both Israel and the Palestinian territory, the tension behind the scenes escalates. Salam, a production assistant who was brought onto the show for his excellent Hebrew language skills, makes a critical adjustment to a line early in an episode, which attracts the attention of the actress playing Manal.

Meanwhile, Salam is smitten by Mariam, but she won’t even give Salam her phone number. Mariam reminds Salam that long ago he told her she made him feel like a fish in the Dead Sea. Is there any hope of recovery from that statement?

On a normal day, Salam passes through the checkpoint between Israel and the West Bank territory twice a day. However, one of the days, he catches the attention of an Israeli guard who takes him to the Commander. When Salam says he is connected with “Tel Aviv on Fire,” the Commander interrogates him with details about the show. Among Salam’s personal items is a copy of the script for the following day, along with his personal notes. Salam confirms that he’s a writer on the show.

The Commander’s wife and mother are addicted to the show. He returns home bragging that he met the writer of the show and shows them the script. When he asks his wife why in the world she likes this Arab show, she replies, “It’s romantic.” She wants to see Manal marry Marwan, the Anti-Zionist Palestinian leader, because he’s manly, but the Commander insists that Manal will fall in love and marry General Edelman.

Armed with a desire to win favor with his wife, the Commander sees this chance meeting with Salam as an opportunity to forcefully influence the season’s outcome. The Commander tells Salam he wants a wedding between Manal and General Edelman. Salam promises he will orchestrate a wedding.

When Salam returns to work, the writer quits, and Salam is promoted to writer. He finds it rather difficult at first to write, so he stops at the checkpoint for a meeting with the Commander. The Commander agrees to help him write the scene if Salam finds him the most delicious hummus. Salam rushes to get it, and then the Commander dictates the scene to Salam, who delivers it to set the next day. The episode is a success. The actors are happy, and Uncle Bassam is happy. So, Salam is kept on the show as the writer. Salam tells Mariam that he’s writing for the show. She can’t believe it because Salam can’t sit still for five minutes.

Mariam, who works at a hospital, overhears the show because all the patients are glued to it on the TV screen. She hears the General Edelman character tell Manal that he’s restless and can’t sit still for five minutes but could sit next to Manal forever. Mariam instantly realizes that Salam truly is writing for the show and is reaching out to her. She feels flattered.

As the season progresses, Salam starts to realize that it’s getting more challenging to keep everyone happy and juggle the politics perfectly. At one point, the soap opera character Manal/Rachel gets a cancer diagnosis. The Commander sends a hit squad to kidnap Salam, and he holds him at gun point and reminds Salam of his promise to write in a wedding with the general. Will Salam be able to write his way to success or will he go down in flames?

TEL AVIV ON FIRE is very clever and engaging. The movie takes viewers through a gamut of emotions, and the actors give a realistic portrayal of their characters. Although there is some colorful language, it’s not overbearing.

TEL AVIV ON FIRE tries to present a balance between being Pro-Palestinian and Pro-Israeli. However, it leans more toward the Palestinian view with its use of language. For example, “the occupation” is said several times with a general rancor toward the concept. Also, eventually, the Israeli Commander is portrayed as the aggressor who’s willing to kidnap the accommodating Salam over something as trivial as a soap opera. Ultimately, the movie contends that Israelis and Arabs can get along, but the “Zionist” system in Israel is flawed and won’t let them. Thus, the movie appears to have a Romantic Non-Christian worldview that leans toward being Anti-Israel. That said, the main character, Salam, desires to help others achieve their goals in a moral fashion.