"Brothers Look Back to Move Onward" 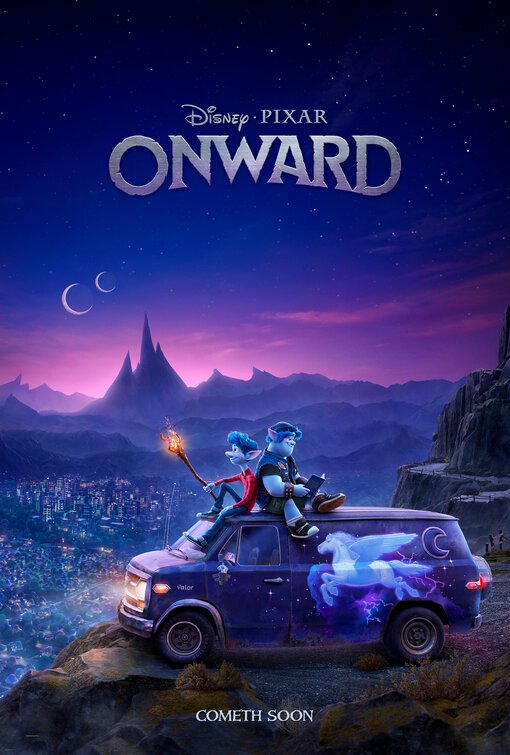 ONWARD is an animated comedy about two elf brothers, Ian and Barley. It takes place in a modern fantasy world where fairy tale creatures have abandoned magic for technology. On his 16th birthday, Ian receives a gift from his late father, a staff with a magic gem that can bring his father back from the dead for 24 hours. However, the magic gem conjuring the spell breaks, leaving only half of their father. So, the brothers embark on a quest to get another magic gem to see their dad before time runs out.

In typical Pixar fashion, ONWARD is extremely witty and well made. The character arcs are superb. Each character learns something valuable. ONWARD has lots of magical elements, however, some of which have Christian sacramental references. Magic is at the center of the story, but the movie warns characters should only use magic to help others, and the poor use of magic has bad consequences. To counter these magical themes, ONWARD has strong moral elements stressing family, reconciliation, sacrifice, and stepping out in faith. MOVIEGUIDE® advises caution for older children.

(Pa, CC, BB, Ho, V, N, A, M):
Dominant Worldview and Other Worldview Content/Elements:
Fantasy magical worldview that has deeper sacramental aspects since the movie is set in a magical land with a stress on using magic for good not evil and characters try to bring back their deceased father using magic, or as the note from their father says that you only live once, but he will be reborn, also there are consequences for messing up a spell (for example, if someone lies during a disguise spell, they get found out), mixed with strong moral elements as characters wrestle through family dynamics and ultimately end up getting closer than ever and some redemptive elements such as sacrifice extolled, reconciliation occurs and there are themes of stepping out in faith, plus a female character makes a comment about her “girlfriend”
Foul Language:
No foul language but a character says, “dang those kids,” one instance where a character starts to say SOB but then trails off, and some says “what the” but then trails off
Violence:
Light animated violence, brothers get into a tussle, dragon breathes fire in pursuit of stopping some characters, boulders fall, a building gets destroyed
Sex:
No sexual immorality but a married couple kisses
Nudity:
Upper male nudity
Alcohol Use:
Implied alcohol use (steins are shown at a tavern, but it’s not clear if they’re filled with alcohol)
Smoking and/or Drug Use and Abuse:
No smoking or drugs; and,
Miscellaneous Immorality:
Characters pretend to be someone they aren’t, character plays a scratch off at a gas station, lying and brief name-calling, but that ultimately ends in characters reconciling, and lots of jokes making fun of political correctness.

ONWARD is a witty animated fantasy movie about two elf brothers, Ian and Barley, who set out to bring their deceased father back to life for a day. ONWARD is set in modern times but takes place in a fantasy land with magical plot elements at the heart of the story. However, ONWARD also has some strong moral elements with some redemptive content stressing family relationships, sacrifice, and reconciliation.

As the movie opens with a chalice reminiscent of the Holy Grail, viewers learn that fantasy creatures like elves, centaurs, mermaids, and fairies have strayed from their magical roots, exchanging magic for technology. The voiceover of the opening sequence asserts that magic was once used as a means to help people but is also incredibly hard to master.

Cut to Ian, a blue elf on his 16th birthday. Ian dons his late father’s college sweatshirt and braces himself for another day at school, but he’s determined to set off on a new path and be more social. Ian’s older brother, Barley, is a geeky punk-rocker type obsessed with magical times.

Barley picks up Ian from school later that day but ends up embarrassing Ian at the same time. Ian returns home with low spirits, and his mother, Laurel, takes notice. Laurel leads her sons up to the attic where she presents the pair with a gift from their late father that he wanted them to open after Ian turned 16. Apparently, it’s a magical staff that requires a magic gem that can bring their father back to life for a full 24 hours, or as the note from their father says that you only live once, but he will be reborn.

Barley tries to cast the spell but can’t. Ian, however, can, but the spell stops short when the magic gem breaks, and Ian and Barley wind up with only half of their father from his feet to his waist. Hopeful that they can complete the spell bringing their father back within 24 hours before their father disappers, Barley suggests they go on a quest to seek out the Manticore, a winged lion creature with a human head who has the knowledge of where the magic gem lies.

At the Manticore’s Tavern, Barley and Ian don’t find the scary lion they expect. Instead, the Manticore seems to have taken to tourism and runs a Chuck-E-Cheese-type establishment for families. When Ian and Barley ask her for the map to the magic gem, the Manticore ends up burning the map as she gets passionate. Trying to make the most of their crummy circumstances, the two wind up using a children’s menu to point them in the right direction.

Meanwhile, Laurel goes out looking for them. Later, Laurel also finds herself at the Manticore’s Tavern and teams up with the Manticore. However, there’s one problem. The Manticore forgot to tell Ian and Brawley about the curse that ensues after someone picks up the gem stone. Now, Manticore and Laurel go in search for the Manticore’s magical sword, the only weapon that can defeat the monster that springs up after someone gets the magic gem.

Ian and Barley experience a host of bumps in the road as they tote half of their dad with them in their van. Ian accidentally turns Barley into a smaller version of himself while trying to use magic to create more gas for their van. Because of Barley’s new small size, Ian now has to drive the van, something he’s afraid to do. Also, after much comical debate, Ian reluctantly agrees to drive down “The Path of Peril” which, according to Barley, is the best choice. After narrowly escaping a few law enforcement officers and posing as their mother’s cop new husband, they continue their trek to Raven’s Point where they believe the magic gem lies.

While on their journey, it comes out that Ian thinks Barley is a “screw-up.” Barley, who’s taking a gap year, has good intentions but is rough around the edges. As the two come closer to finding the stone, Ian begins to see that Barley’s wealth of magical knowledge is useful and not childish. Still, there are plenty of wrongs that need to get right. Will they succeed in bringing their dad back, even though time’s running out?

In typical Disney/Pixar fashion, ONWARD is extremely witty, emotional and well made. The character arcs are superb, with each character learning something valuable along the way. ONWARD’s director and co-writer, Dan Scanlon, based the script off his own relationship with his brothers and the looming desire to get to know his father, who died before Dan was born.

For all its positive content, ONWARD does deserve some caution for lots of magical elements. Magic is at the center of the movie, but the filmmakers stress that characters should only use magic to help others. The movie also shows that the poor use of magic has bad consequences. To counter these magical themes, ONWARD has strong moral elements stressing family, reconciliation, sacrifice, and stepping out in faith. Many of the plot devices recall the clear Christian sacramental devices in the great movie INDIANA JONES AND THE LAST CRUSADE where each test in the search for the Holy Grail demands Christian virtues. One female character makes a quick ambiguous comment about her girlfriend, however. That said, they are many witty elements making fun of political correctness, such as a tiny motorcycle gang. For these reasons, MOVIEGUIDE® advises caution for older children.