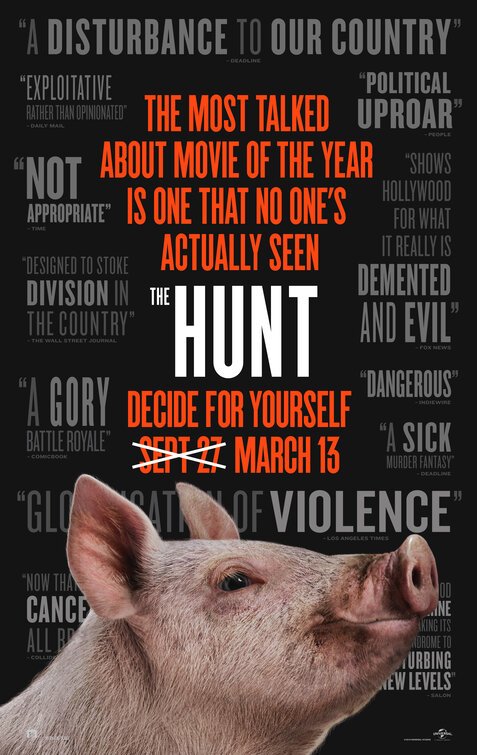 THE HUNT (2020) is an ultraviolent thriller about a woman fighting angry rich secular liberals who kidnap and drug 12 conservative social media activists and Trump supporters. The liberals plan to hunt them down in cold blood. The victims are given some rifles and guns, but no sooner have they grabbed the weapons that the liberals open fire on them from a nearby hill. Several people survive, including a woman named Crystal who served in Afghanistan. Eventually, Crystal takes one of the walkie talkies the liberals are using to communicate with one another. She starts tracking them down and killing them. Who will survive?

THE HUNT has a few funny political jokes. However, the movie’s major plot twist almost totally lets the liberal villains off the hook. Also, although the movie shows that the liberal villains are bigoted, several of the conservatives being hunted are racist and xenophobic in a mean way. Finally, there’s not enough information given about the tough heroine and her background to make her sympathetic, much less to justify the movie’s extremely graphic, abhorrent violence and frequent foul language.

(HHH, PCPC, B, LLL, VVV, S, A, MMM):
Dominant Worldview and Other Worldview Content/Elements:
Very strong humanist worldview in a survival of the fittest tale, with some strong politically correct elements that side with the godless secular liberal villains who are taking revenge against some political opponents by hunting them down in cold blood, though the movie does have some jokes that mock the liberal, godless attitudes of the villains, and the heroine is tough as nails, but she shows some compassion and tries to help people a couple times
Foul Language:
108 obscenities (including many “f” words), 12 strong profanities, and two light profanities
Violence:
Very strong graphic, bloody violence includes machine gun fire hits a woman, and her blood splatters into the face of a man nearby, an explosion has ripped a woman in half, and her intestines are exposed on the bottom half remaining, a man’s face is ripped off by gunfire, a few explosions rip two men into bloody bits of blood spray, woman has been impaled by sticks at the bottom of a pit into which she’s fallen, people are shot to death point blank multiple times, two women engage in brutal hand-to-hand combat, both women stab one another in the torso during that fight, people hit with objects, and some other fighting
Sex:
One or two light sexual comments
Nudity:
No nudity but some brief female cleavage
Alcohol Use:
Brief alcohol use
Smoking and/or Drug Use and Abuse:
No smoking, but people are drugged so they can be kidnapped for nefarious purposes; and,
Miscellaneous Immorality:
Kidnapping, revenge, vigilante justice, cruelty, brutality, President Trump is called an obscene name, Trump supporters are called deplorables.

THE HUNT (2020) is an ultra-violent thriller about a woman fighting some angry rich secular liberals who have kidnapped and drugged 12 conservative Internet, social media activists and Trump supporters to hunt them down in cold blood. Despite some funny political jokes, the big reveal in THE HUNT and some xenophobic attitudes from two or three of the conservative victims, gets the movie’s liberal villains off the hook. Also, there’s not enough information given about the tough heroine and her background to make her more sympathetic, much less to justify even slightly the movie’s extremely graphic, abhorrent violence and frequent foul language.

The movie opens on a plane where the rich liberals are transporting their conservative victims to the place where they will be hunted down in cold blood. One of the victims, a big man, suddenly wakes up and tries to attack the liberal passengers. However, he’s still a little too groggy from the drugs, and he gets stabbed in the neck, and his left eye plucked out by one of the liberal female leader’s high heels.

Cut to the conservatives waking up in a meadow near a small swamp. All the men and women have their mouths covered by a locked hard rubber device with a leather strap. A large wooden box is lying in the middle of the clearing. One man starts to pry open the box while the others hide.

When the man opens the box, a little pig jumps out and starts running around. The pig carries a key that unlocks the mouth restraints. Inside the box are a bunch of rifles, guns and other weapons. No sooner have the people grabbed the weapons when a hail of gunfire erupts from a hill overlooking the meadow. A gun battle ensues, but the attackers on the hill have the advantage. People are shot, a woman falls into a pit and is impaled on sharp sticks. Then, she gets blown in half by a grenade. Meanwhile, a man steps on a landmine and is blown to bloody bits.

Several of the victims survive, including Crystal, a blonde woman with a Southern accent who apparently served in Afghanistan. She’s used to the tricks of Muslim fanatics, so she saves one man’s life and teams up with him. However, the man is a stupid xenophobe and soon gets killed because of his stupidity.

Eventually, Crystal gets her hands on a walkie talkie the liberals are using to communicate with one another. So, she starts tracking them down and killing them. Who will survive?

THE HUNT (2020) has a few political jokes that folks on both the Left and Right might find funny. However, the movie’s major plot twist, which reveals why the liberals decided to hunt down these particular conservative activists, almost totally lets the liberal villains off the hook. Also, although the movie shows that the liberal villains are themselves bigoted, especially against conservatives who believe in God, several of the conservatives being targeted are racist and xenophobic in a mean way. Finally, there’s not enough information given about the tough heroine and her background to make her more sympathetic, much less to justify even slightly the movie’s extremely graphic, abhorrent violence and frequent foul language.