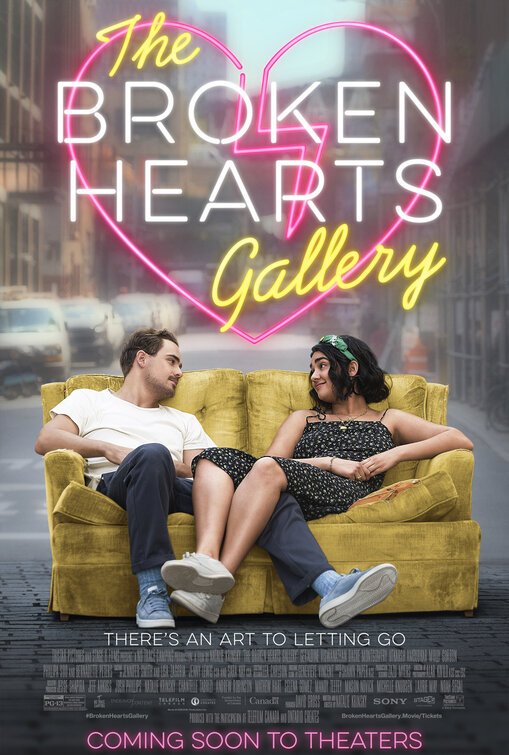 THE BROKEN HEARTS GALLERY follows Lucy, a young woman in New York City who was just dumped by her boyfriend, Max. Lucy meets Nick by accident after thinking he was her Lyft driver. Lucy and Nick just happen to run into each other the following evening at a restaurant, where Nick saves Lucy from making a scene in front of Max. An unlikely friendship and business partnership blossoms as Lucy helps Nick finish his boutique hotel, and he lets her use some of the space for her Broken Hearts Gallery, where people display items from relationships gone wrong.

THE BROKEN HEARTS GALLERY has a mixed Romantic, moral worldview. The movie has moral themes of letting go of the past, but appreciating the fact that the past made you who you are today. It also extols family, friendship, forgiveness, and taking care of others. However, Romantic elements of love and emotion play a central role. The movie’s positive content is also marred by unnecessary foul language, lewd dialogue and annoying politically correct elements. So, MOVIEGUIDE® advises extreme caution for THE BROKEN HEARTS GALLERY.

(RoRo, BB, C, PCPC, HoHo, Fe, FR, LLL, V, SS, N, AA, DD, M):
Dominant Worldview and Other Worldview Content/Elements:
Mixed Romantic, moral worldview includes letting others help you let go of your past, family, friendship and taking care and helping others is extolled, the Romantic theme of love plays a central part as the two main characters are getting over heartbreak and end up falling in love with one another, love is also found in places and things, but eventually the characters see that material things can’t bring you happiness and love, Christian elements of marriage and forgiveness are seen and jealously is discussed as being unbecoming, positive content is also marred by some politically correct content including one character is a homosexual and is seen kissing a girl at the beginning go the movie, while two girls who are best friends kiss, a comment from a man about being homosexual also is said, gender roles are discussed, and some feminist pro-abortion elements include a shirt displaying a uterus says “my body my choice” and a Planned Parenthood volunteer on the side of the road is trying to recruit people, plus there’s a false New Age comment about “living your truth”
Foul Language:
25 obscenities, 19 profanities (one GD), light name-calling, diarrhea comment, jokes about murder
Violence:
Man is chased down the road by a woman and hit in the head
Sex:
Strong and light sexual immorality includes implied fornication between unmarried man and woman who eventually become a couple, kissing between girls who were dating, and a kiss between two friends who are girls, a depicted vibrator, many conversations about sex, and one comment about someone being a sex god, some lewd jokes regarding sex and self-abuse, a politically correct joke about gender roles, and kissing between a dating couple
Nudity:
Upper male nudity as man lays in bed with woman in her bra, but they’re covered by a sheet
Alcohol Use:
Comment about alcohol from underage girls, alcohol seen and drank throughout the movie and one instance of girls drunk
Smoking and/or Drug Use and Abuse:
Cigarettes seen but not smoked, and conversations about marijuana, chewing tobacco and LSD; and,
Miscellaneous Immorality:
Lying, stealing, betting.

THE BROKEN HEARTS GALLERY follows a young woman who starts an art gallery from trinkets that people drop off from past relationships. THE BROKEN HEARTS GALLERY is a refreshing take on the romantic comedy genre, with some morally uplifting themes, but its positive content is sometimes overshadowed by unnecessary foul language, lewd sexual content, jokes and innuendos, and politically correct content, so MOVIEGUIDE® advises extreme caution.

Twentysomething Lucy is an assistant at an art gallery. As the movie opens, Lucy sits with her best friends, Nadine and Amanda, gushing about her event that evening and her boyfriend, Max. Lucy thinks her relationship is perfect, but Nadine and Amanda are betting behind her back that it’s not.

Cut to the art event later that night. Lucy is tasked with introducing Max at the gallery event, since she works for him. However, as she’s in the middle of introducing him, Lucy sees him all close with an ex-girlfriend. Lucy makes a fool of herself on stage. After she’s done, Max dumps her for the older, more professional woman.

Lucy waits on the side of the street for a Lyft driver to pick her up and take her home. When a car that’s the exact make and color pulls up, she gets in without question. It’s not really her Lyft driver, but however, the young man still takes her home, since he can see she’s upset. At the end of the ride, Lucy realizes she got in the wrong car and has a mini freak out, but she thanks Nick, the driver, for taking her home.

The following day, Lucy gets fired from her job on top of being dumped. Nadine and Amanda try to comfort Lucy by encouraging her to purge all the trinkets in her room from her past relationships, because she’s a bit of a hoarder in that area of her life. Lucy tries to sell, pawn and Goodwill her trinkets, but by the end of the day is feeling very sad. As Lucy walks down the street, she sees Max and his new girlfriend enter a restaurant. Lucy, feeling confident, decides she will go in and confront him. Right as Lucy almost reaches Max’s table, Nick, the man who drove her home last night, stops her.

Nick takes Lucy outside and down the street to where he lives. When they enter, Lucy is a little shocked to see it’s a bit unfinished. She learns that Nick is renovating the space to open his own boutique hotel called the Chloe Hotel. While there, Lucy hangs up Max’s tie on a nail on a piece of drywall and labels the wall The Broken Hearts Gallery and then quickly leaves.

The next morning, Nick shows up at Lucy’s house to tell her that someone came in the hotel last night left something on the wall where she pinned his tie. Marco, Nick’s friend, is there and Lucy hears them talk about how they’re running out of money to finish the hotel. Lucy offers to help Nick, but in return asks that she can start her Broken Hearts Gallery at the hotel so everyone can purge trinkets from their past. Nick agrees, and a unique friendship and business partnership is born.

THE BROKEN HEARTS GALLERY is a refreshing take on the romantic comedy genre. The movie does have its cheesy parts, and it’s super predictable, but it has positive underlying themes. The two leads, Geraldine Viswanathan and Dacre Montgomery, are great in their roles and have an unexpected and captivating chemistry. Viswanathan delivers the fast-moving, witty dialogue perfectly.

THE BROKEN HEARTS GALLERY has a mixed Romantic, moral worldview. The movie has strong moral themes of letting go of the past and but still appreciating the fact that the past made you who you are today. It also extols family, friendship and taking care of others. However, Romantic elements of love and emotion play a central role. Also, too much foul language, sex talk and some annoying politically correct elements mar the movie. So, MOVIEGUIDE® advises extreme caution for THE BROKEN HEARTS GALLERY.