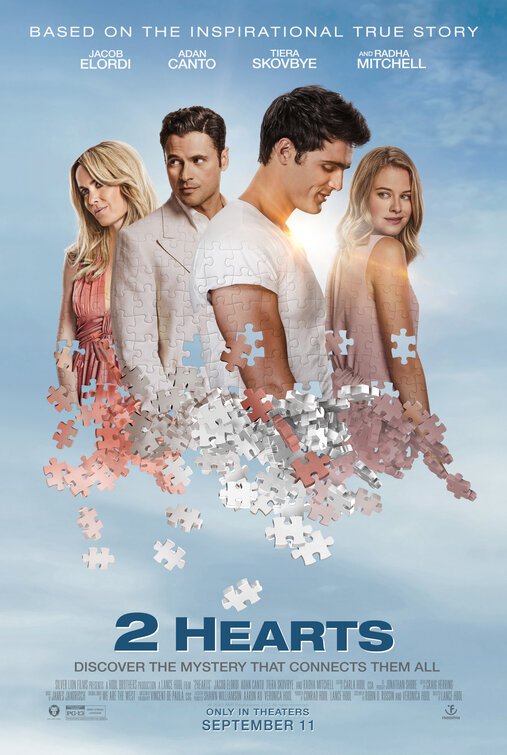 Based on a true story, 2 HEARTS follows two love stories happening at the same time, but they’re connected in a unique way. Jorge meets Leslie, a flight attendant while on a business trip for his family’s rum business. Chris heads off to start his freshman year at Loyola. He meets a senior named Samantha, and they hit it off after he volunteers for her campus safety program. These four lovers seem to have everything going for them. However, when health problems catch up with Jorge and Chris, their lives are changed forever.

2 HEARTS has good jeopardy and an uplifting conclusion, but the back and forth between the two love stories gets annoying. 2 HEARTS has a strong Christian, moral, pro-life worldview. Prayer is extolled, characters make the Sign of the Cross, and there’s a priest. Also, the movie stresses selfless acts of kindness, marriage, family, having a baby, and treating every day as a miracle. These positive elements in 2 HEARTS are mitigated by some Romantic, non-Christian content. Because of this and brief foul language, MOVIEGUIDE® advises strong caution.

(CC, BB, Ro, L, V, S, N, AA, D, M):
Dominant Worldview and Other Worldview Content/Elements:
Strong Christian, moral, pro-life worldview include prayer is extolled, characters make the Sign of the Cross, there’s a priest character, the movie stresses treating every day and everything as a miracle, selfless acts of kindness and helping other are extolled, marriage is affirmed, a couple has a baby, and family is promoted, mitigated by some Romantic elements that include implied fornication between two unmarried lovers
Foul Language:
Three obscenities, four profanities, there’s a “Thank God” comment, and some vomiting
Violence:
Conversation about a car crash, three scenes where young men pass out and two of those are bad where one is a joke, some scary scenes where young man is rushed to the hospital, a surgery scene where surgeon removes something from the body where some blood is seen, a character dies, and a man punches wall
Sex:
Unmarried couple fornicates but eventually get married, and there’s some implied marital sex
Nudity:
Implied nudity as unmarried man and woman are in bed after fornicating, seven instances of upper male nudity that take place when a boy changes, people are at the beach and when boys are playing sports, a woman is seen in a one-piece swimsuit with lots of cleavage, and a girl is seen in a bikini
Alcohol Use:
Depicted drunkenness from college students as sober characters pick them up to give them rides home, but it’s not rebuked and social drinking at weddings
Smoking and/or Drug Use and Abuse:
A cigar is smoked but no drugs; and,
Miscellaneous Immorality:
Bad role model as father doesn’t approve of the woman his son wants to marry.

Based on a true story, 2 HEARTS follows two different love stories that happen at the same time.

The movie opens with a lone young man on a beach, Chris, who is the narrator. Chris goes from present day on the beach, to being rushed into the hospital on a stretcher fighting for his life.

Cut to a college soccer game. A young Jorge Bolivar passes out during the game. Jorge is rushed to the hospital to learn he has a disease that affects his lungs and breathing. During an operation, the doctor had to remove part of his lung, causing Jorge to have a minor cough when he over-exerts himself.

Thirty years later Jorge is working for his family’s rum business. While on a business trip, Jorge is flying to a new location when he meets a beautiful Pan Am stewardess. Jorge is a nervous flier, so he asks the woman, Leslie, to sit and hold his hand while the plane takes off. Leslie obliges him, and from there on out Jorge always shows up at Leslie’s layovers and a relationship between the two starts to bloom.

While Jorge is falling in love with Leslie, another love story is unfolding with two young people. Chris finds out he didn’t get into his dream school of Stanford. However, the good news is that Chris did get into Loyola, the same school as his older brother. As Chris is leaving a class on his first day, he runs into a young girl. Chris is captivated by her, but leaves without introducing himself as the next class is about to start.

However, Chris runs into her again when she’s on the hunt for volunteers for her safety patrol booth to help students get home safely from parties. The young woman introduces herself as Sam, and Chris ends up joining her safety group as her safety buddy. Chris and Sam hit it off the first night they work together, and he eventually convinces her to go on a date with him.

Just as everything seems to be going great for these two couples, things take a turn for the worst.

2 HEARTS has all the right aspects to make a good story, but sadly misses some of the marks. The jeopardy is good, and the ending is uplifting, but the narration is very muted and one dimensional, with not much change in tone as the story changes. This could have to do a little with the script, because the back and forth between Chris and Jorge’s stories is rather annoying. Just as the viewer starts to get invested in one story, the movie jumps to the other one. Thus, though the movie is based on a true story, it falls a little flat in being translated to the big screen.

2 HEARTS has a strong Christian, moral, pro-life worldview. Prayer is extolled, characters make the Sign of the Cross, and there’s a priest character. Also, the movie stresses treating every day and everything as a miracle, selfless acts of kindness and helping other are extolled, marriage is affirmed, a couple has a baby, and family is promoted. These positive elements in 2 HEARTS are mitigated by some Romantic content, such as a scene of implied fornication. Because of this and some brief foul language, MOVIEGUIDE® advises strong caution.