"Helping Others Will Also Help You" 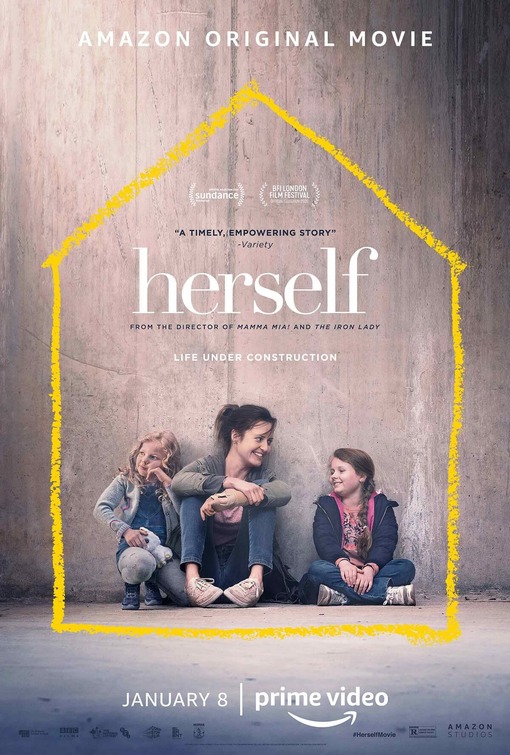 HERSELF is an Irish drama about a battered mother trying to construct a home for her two young, precious daughters. Suffering from PTSD, Sandra has won custody of her children after her husband, Gary, went to jail after roughing her up. She and her two daughters, Emma and Molly, live in a hotel, their housing expenses paid for by the government. One of Sandra’s two employers, a female doctor, offers to loan her the land and construction money so Sandra can secretly build her own house. Sandra’s husband sues her for custody when Emma suffers a small injury at the construction site.

HERSELF is a moving portrait of a battered mother trying to overcome difficult obstacles, including a violent estranged spouse. Clare Dunne delivers an excellent performance as Sandra. HERSELF generates lots of sympathy for battered mothers. As a result, it has a compassionate, morally uplifting worldview. HERSELF also has a couple positive references to God and to St. Brigid of Ireland. Brigid knew St. Patrick. Sadly, HERSELF is marred by a loose story structure, some gratuitous “f” words and several strong profanities.

(BB, C, LLL, VV, A, M):
Dominant Worldview and Other Worldview Content/Elements:
Strong moral worldview sides with battered women, especially battered mothers and their children, and shows the importance of people helping other people in need, with a couple positive references to God and an early scene mentions the story of St. Brigid of Ireland, a friend of St. Patrick whose mother was baptized by Patrick
Foul Language:
About 16 obscenities (mostly “f” words), six strong profanities referencing Jesus Christ in some manner, nine light exclamatory profanities
Violence:
Brief strong and light intentional and accidental violence such as a woman’s husband punches her, twists her wrist and causes her to fall in the kitchen (her mouth is bloodied, and she appears to have a small bloody wound on her forehead), several scenes flash back to that moment (the woman clearly has come away from the incident with PTSD, which gives her panic attacks), it’s revealed that the woman’s younger daughter had seen the incident unfold from outside the open kitchen door, the husband seems about to return to his violent ways in a few scenes later in the movie, a child’s arm gets a gash when she gets in the way as her mother is using a hammer’s claw end to remove a nail in a house being built, and a case of arson burns a small building
Sex:
No sex scenes or sexual immorality
Nudity:
No nudity
Alcohol Use:
People drink beer in a couple scenes, and some scenes are set in a relatively empty pub during the day
Smoking and/or Drug Use and Abuse:
No smoking or drugs; and,
Miscellaneous Immorality:
Heroine fudges the truth on a government form by marking N/A or Not Applicable, and villain has anger issues and calls his wife an obscene name in second half of movie after trying to act nice (his niceness is really phony), but justice prevails when he goes too far.

HERSELF is an Irish drama about a battered wife who tries to build her own house to keep away from her abusive husband and forge a proper home for herself and her two young, precious daughters. HERSELF is a moving portrait of a battered mother trying to survive and overcome PTSD, difficult circumstances and a violent estranged spouse, but it’s marred by a loose story structure, gratuitous “f” words and several strong profanities.

Suffering from PTSD and an injured left wrist, Sandra has won custody of her two daughters after her husband, Gary, went to jail for a brief period after roughing her up one day. She and her two daughters, Emma and Molly, are living at a hotel in Dublin, with their housing expenses paid for by the government. After serving a brief stint in jail for hurting Sandra, Gary gets visitation rights with Emma and Molly every other weekend. Meanwhile, Sandra works two part-time jobs.

Looking at the Internet one day, Sandra watches a video with a man discussing an idea for low income people to build their own small house. Sandra approaches the government welfare office with a plan for them to give her a loan for building such a house for herself and her two children. She shows them that paying for such a house would be cheaper than paying for the hotel. In fact, she eventually could even pay back some or all of the money. Of course, the narrow minded bureaucrats nix her idea.

However, one of Sandra’s employers, a female doctor recovering from a broken hip, offers to give her the land and loan her the construction money so Sandra can build her own house secretly. The new house would be right near the doctor’s own house, where Sandra works as the doctor’s part-time housekeeper and helper.

Sandra convinces a local contractor to help her build the house on the weekends. She also enlists the help of some friends, including two people who work with her at the pub where she cleans the tables and a friendly mother at her children’s school.

However, Sandra’s husband sues her for custody when Emma suffers a small injury at the construction site. Gary is also upset that Sandra is letting little Molly stay with Sandra because Molly’s afraid of him. Gary falsely thinks Sandra is deliberately poisoning the child’s relationship with him. Gary’s suit exposes Sandra’s secret building project. Not only is Sandra in danger of losing custody of her children, she’s also in danger of losing her access to any government assistance as a battered wife.

HERSELF is a moving portrait of a battered mother trying to survive and overcome PTSD, difficult circumstances and a violent estranged spouse. Clare Dunne, who also co-wrote the screenplay, delivers an excellent performance as Sandra. Her supporting cast members are also memorable, and the child actors are very cute and endearing.

One of the movie’s best parts is when Sandra mentions the question that all battered women seem to get, “Why didn’t you leave the man earlier?” People never ask the man why didn’t he stop abusing the woman, Sandra angrily notes. It should be added that, before he sues Sandra for custody of their children, the husband in this story expresses a desire to patch things up with her. In one scene, he informs Sandra he’s started seeing a counselor to fix his anger issues. However, he has no specific plan on how to show Sandra he can change. Also, Sandra is suffering from so much PTSD from his attack that it’s hard for her to see any future with the man. Her injured left wrist, a case of nerve damage from her husband stomping on it, is a constant reminder to keep away from him.

Ultimately, HERSELF is a drama that generates lots of sympathy for all battered women, especially battered mothers. As a result, the move has a compassionate, morally uplifting worldview that’s ultimately inspiring. A line of dialogue in the third act affirms the adage that, when you help other people, you are helped in return. HERSELF also has a couple positive references to God and a scene mentioning the story of St. Brigid of Ireland, a friend of Ireland’s patron saint, Patrick, whose mother was baptized by St. Patrick. Sadly, though, HERSELF is marred by a loose story structure, gratuitous “f” words and several strong profanities. So, MOVIEGUIDE® advises extreme caution.

“Bear one another’s burdens, and so fulfil the law of Christ.”