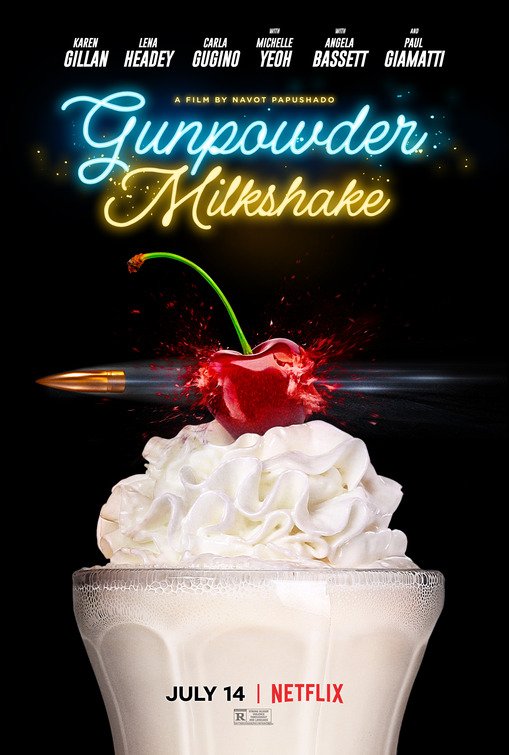 GUNPOWDER MILKSHAKE, a Netflix action thriller, opens with a teenage girl named Sam having a milkshake with her mom. Suddenly, her mom springs into action, shoots someone and goes on the run. Sam tries to run after her, but she’s stopped by Nathan, who works for a group of mobsters called The Firm. Fifteen years later, Sam is an assassin working for The Firm. Nathan assigns her and several other women to go after a man who embezzled money from The Firm. However, Sam learns the man needed the money to pay a ransom for his little daughter, who’s been kidnapped by a rival gang.

GUNPOWDER MILKSHAKE delivers some exciting, stylish action, but it becomes tiresome after a while. The movie opens with some cleverness; however, the incessant violence eventually becomes deadening and masks the fact that the plot doesn’t have anywhere to go after the halfway point. Also, the characters aren’t well defined and are generic. GUNPOWDER MILKSHAKE is a thriller for mature viewers and warrants extreme caution, primarily for too much violence, several “f” words and about three strong profanities.

(PaPaPa, B, C, LL, VVV, MM):
Dominant Worldview and Other Worldview Content/Elements:
Very strong mixed pagan worldview where anything goes to save the day, mixed with some moral, redemptive elements promoting compassion, doing the right thing, and risking your life to protect a child
Foul Language:
11 obscenities (including five “f” words), two JC profanities, one GD profanity, two light profanities, but once an 8-year-old girl becomes a major figure in the story, the adults start watching their language and sometimes say “fudge” or “motherfudger”
Violence:
Lots of very strong bloody action violence and killings overall, with almost nonstop shooting, punching, kicking, stabbings as dozens upon dozens of enemy attackers are mowed down by the heroines, other killings include garroting (throat slitting) and hangings, and a young girl is being fought over throughout the movie and is endangered by being in the midst of all the fighting
Sex:
No sex
Nudity:
No nudity
Alcohol Use:
No alcohol use
Smoking and/or Drug Use and Abuse:
No smoking or drugs; and,
Miscellaneous Immorality:
Our heroines work as hitwomen for a shadowy cabal of evil men akin to the Mob called The Firm, and the movie has a callous disregard for human life throughout, aside from trying to save an 8-year-old girl from kidnappers.

Quentin Tarantino has reshaped much of modern American action movies with hyper-stylized violence in movies like KILL BILL and also made women capable of being just as violent as men. That tradition continues with the new Netflix action movie GUNPOWDER MILKSHAKE. In the movie, a secret team of hitwomen working as assassins for a Mob-like organization called The Firm stand up and take action against an endless army of men to save an 8-year-old girl from kidnappers.

The movie opens by showing its lead assassin, Sam (Karen Gillan), as a teenager, having a milkshake with her mom, Scarlet (Lena Headey). Suddenly, her mom has to spring into action, shoot someone and go on the run. Sam tries to run after her but is held back by a man named Nathan (Paul Giamatti), who works for a group of shadowy Mob-like men called The Firm.

Jump to 15 years later. An accountant for the Firm has embezzled a bunch of money from his crime bosses. He’s trying to pay the ransom to save his 8-year-old daughter who’s been kidnapped by rival criminals, but Nathan assigns Sam (who’s now an assassin herself) to get the money back and kill the embezzler if it’s required to do so.

Thus begins an endless array of chases and fights that involve non-stop punching, kicking and martial arts, and eventually a hail of gunfire that seems to last throughout much of the last half hour. GUNPOWDER opens with some cleverness (Sam is part of a team of female assassins used by the Firm for their dirty work, and their headquarters is in a fake library where the books are actually holding a variety of guns). However, the incessant violence becomes deadening and masks the fact that the plot really doesn’t have anywhere to go after the halfway point.

While it may be fun to see some top-notch action-movie actresses together onscreen, their characters aren’t very well defined and are generic as a result. Basically, this is a movie for those who love nonstop action mayhem, which this movie delivers in spades. Director Navot Papushado delivers the action goods with a great deal of style, making this movie a fun watch until it grows tiresome, but the style is still eye-catching all the way to the end.

GUNPOWDER MILKSHAKE has no sex or nudity, with a moderate amount of foul language for an R-rated action thriller. To its credit, once the plot introduces the 8-year-old girl, the female assassins urge each other to watch their language. This stops the actual obscenities and sometimes results in “fudge” and “motherfudger” used as substitutes. However, the movie has a mixed pagan worldview where anything goes to save the day, mixed with some moral, redemptive promoting compassion, doing the right thing and risking your life to protect a child.

GUNPOWDER MILKSHAKE is a thriller for mature viewers and warrants extreme caution, primarily for too much graphic violence, several “f” words and at least three strong profanities.