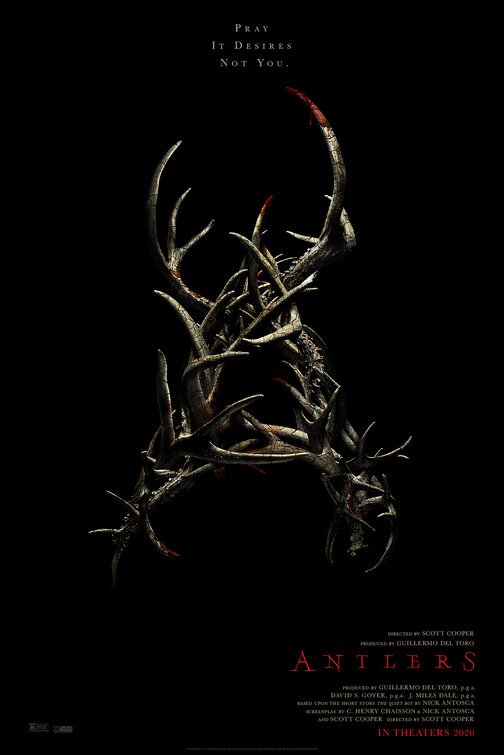 ANTLERS is a creepy horror movie about a middle school teacher, Julia, who tries to help a male student who seems to be suffering some abuse. It turns out, however, that the boy’s father has been “infected” by an indestructible demonic spirit that’s been transforming the father into a monstrous, large creature with giant antlers. The student has tried locking up his father in the attic, where his younger brother refuses to leave the father’s side. Julia and her brother, the sheriff, try to save the situation. However, things don’t turn out so well, and people are killed, including two innocent children.

ANTLERS has the expected scary horror scenes and creepy atmosphere. So, in that sense, it’s well-made. However, ANTLERS contains lots of gruesome violence and strong foul language. Also, the demonic creature kills one child, another child is killed, and the demonic spirit can’t be destroyed. As a result, ANTLERS has a depressing, unsatisfying, and theologically, morally abhorrent ending. This will turn off most viewers, especially media-wise ones. Horror movie fans won’t be sufficiently impressed to make ANTLERS a really popular, bonafide hit.

(OOO, B, LLL, VVV, S, N, A, DD, M):
Dominant Worldview and Other Worldview Content/Elements:
Very strong occult worldview where an indestructible, mythical, demonic creature possesses the soul of a father of two boys and transforms him into a monster that can’t be destroyed, though the two main characters try to defeat the monster in good faith
Foul Language:
About 28 obscenities (mostly “f” words), six Jesus profanities and five light profanities such as OMG
Violence:
Intense, scary, extreme and strong bloody violence includes monster attacks two men in a dark mine, giant creature attacks one middle-school boy and starts tearing into his body, giant creatures viciously attacks one woman, man stabbed with antlers, giant creature with antlers emerges from one man, woman murders young boy who’s been infected by demonic creature, creature stabs man with its antlers twice, creature menaces man, woman and three boys, boy draws scary monster pictures
Sex:
A light implied scene of attempted child sexual abuse of woman when she was a child, and school bully makes obscene sexual gestures
Nudity:
Upper male nudity in one scene
Alcohol Use:
Woman seems to be struggling with alcohol when she visits a store about two times
Smoking and/or Drug Use and Abuse:
Brief smoking, mention of the opioid epidemic, and two men appear to be making meth in an abandoned mine; and,
Miscellaneous Immorality:
Brief bullying and name calling.

ANTLERS is a creepy horror movie about a teacher who tries to help a young male student whose father and brother have been “infected” by a powerful demonic spirit. ANTLERS is well made but it has a depressing, violent and unsatisfying ending where the demonic spirit can’t be destroyed, and two children are killed.

The movie opens with a man, Frank Weaver, asking his young son, Aidan, to wait in their truck while Frank goes into a dark cave mine to meet his friend. In the mine, it turns out that Frank and his friend are making meth to sell. Inside the mine, however, they’re attacked by giant creature of some kind. Aidan grows curious and enters the mine too. Will the boy also be attacked?

Cut to a woman named Julia Meadows, who’s returned home to live with her brother, Paul, the local sheriff. Julia works as a middle school teacher in the local public schools. Julie becomes concerned about the welfare of Frank’s other son, Lucas, who looks emaciated and ill-kempt. Meanwhile, there’s apparently some kind of a creature on the loose who’s attacking and partially eating people in the woods.

It turns out that Lucas is keeping his father and brother locked up in the attic. His father is acting crazed and seems to be transforming into a demonic animal creature. Furthermore, the younger brother won’t leave the father’s side. Julia and her brother try to save the situation, but, according to the local Native American leader, the community’s retired sheriff, the creature is an ancestral demonic spirit who can’t be killed but jumps from one person to another person.

ANTLERS has the expected scary horror scenes and creepy atmosphere. So, in that sense, it’s well-made. However, ANTLERS contains lots of gruesome violence and strong foul language. Also, the demonic creature kills one child, another child is killed, and the demonic spirit can’t be destroyed. As a result, ANTLERS has a depressing, unsatisfying ending that will turn off most viewers, especially media-wise ones. Horror movie fans won’t be sufficiently impressed to make ANTLERS a really popular, bonafide hit.

MOVIEGUIDE® thinks that, unless there’s an ultimate Christian, redemptive meaning of some kind to it, horror movies without a happy ending are just a bummer and usually not worth the time. ANTLERS suffers most from the fact that it makes the demonic spirit too powerful. This is terrible theology and bad philosophy, resulting in an abhorrent movie.