"Keeping It All in the Family" 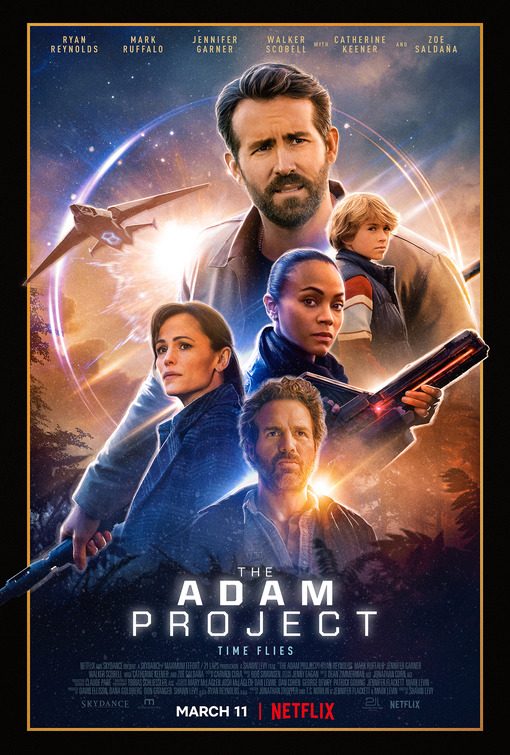 THE ADAM PROJECT is a science fiction adventure on Netflix. Ryan Reynolds plays Adam Reed, who steals a time travel jet to go back to 2018 to stop his father from creating time travel. Adam didn’t have time to set the time gauge properly because some other jets were shooting at him. So, he ends up in 2022, where he meets his 12-year-old self. Their father had died in an accident 18 months earlier. Big Adam must repair his time jet to make another jump to 2018. However, time soldiers are hot on his trail. They’ve been sent from his father’s partner, who took used the time travel technology after he died to make herself rich and powerful.

THE ADAM PROJECT is exciting and funny. It has many exciting twists and terrific action scenes. The music is excellent, and the dialogue often hilarious. THE ADAM PROJECT has a strong moral, pro-family worldview. Some of the family scenes are very touching. However, THE ADAM PROJECT has lots of gratuitous foul language and two lewd comments involving the boy. So, MOVIEGUIDE® advises extreme caution.

(BB, FR, LLL, VV, S, N, A, M):
Dominant Worldview and Other Worldview Content/Elements:
Strong moral, pro-family worldview with some comments about there being a fixed timeline for the universe and the humans in it, mitigated by some antinomian or lawless/immoral behavior
Foul Language:
At least 41 obscenities, four Jesus profanities, four GD profanities, 30 light profanities
Violence:
Lots of action violence such as soldiers in body armor are shot or hit by energy sticks and disappear in a “mist” of red lights, lots of fighting, explosions, bullet hits a character and sweeps character away, boy punches and hits smaller boy, and man threatens the bully
Sex:
Passionate kissing between married couple who haven’t seen one another in a while, which ends with a clear intention of going into a bedroom, and man makes an adult comment about “getting laid” in front of 12-year-old boy, who comments that this is something he’d like to do when he’s older
Nudity:
Partial upper male nudity as man dresses a bullet wound
Alcohol Use:
People drink alcohol at a bar in one scene
Smoking and/or Drug Use and Abuse:
No smoking or drugs; and,
Miscellaneous Immorality:
Two boys bully smaller boy.

THE ADAM PROJECT is a science fiction thriller on Netflix about a time traveler from 2050 who returns to the past to stop his father from inventing time travel in 2018 and ends up accidentally encountering his 12-year-old self in 2022. THE ADAM PROJECT is exciting and funny, with a strong pro-family worldview about growing closer to parents, but it has a gratuitous amount of foul language and brief lewd, immoral dialogue in one scene involving the 12-year-old boy.

The movie opens with Adam Reed flying a stolen time travel jet through a wormhole while being chased by two other time jets. Adam ends up in 2022 outside his widowed mother’s house next to some woods. His mother is out on a date, but his 12-year-old self is there at the house with the family dog. After some conversation, the boy figures out that the man is really himself, from the future.

Big Adam has been shot, so his time machine jet won’t work for him because the key fob is keyed to his DNA. However, Young Adam can use the key to let Big Adam onto the jet so he can trigger the jet’s self-repair mechanism.

Young Adam’s father was killed in an accident 18 months ago. Big Adam must travel to 2018 to stop his father from creating time travel. He tells Young Adam that their father’s partner, a female billionaire named Maya Sorian, took his father’s time travel wormhole generator after he died and made herself rich and powerful. As a result, she turned 2050 into a terrible place. To top it off, she had Adam’s wife, Laura, killed when Laura tried to go back in time to destroy the nascent time travel technology.

Maya and her time travel soldiers are hot on Big Adam’s trail, however. The two Adams must avoid being captured by them, or worse, so Big Adam can travel to 2018. An exciting, thrilling adventure ensues. The movie also has many funny lines in it, many of them coming from Ryan Reynolds, who plays Big Adam.

THE ADAM PROJECT is one of the most entertaining movies Netflix has released yet. It has many exciting twists and terrific action scenes. The music is excellent, and the dialogue is often hilarious.

THE ADAM PROJECT has a strong moral, pro-family worldview. The movie’s pro-family themes are very touching. It becomes clear that the father loves his wife and son, even though he gets too wrapped up in his work. It’s also clear that Big Adam loves his wife, Laura.

However, the movie’s moral worldview is marred by some antinomian or lawless/immoral behavior. For example, as usual, Ryan Reynolds has a tendence to utter many expletives. Thus, THE ADAM PROJECT has a gratuitous amount of foul language. Also, there’s one scene where Big Adam makes a lewd comment in front of the 12-year-old boy, who isn’t fazed by the comment. So, MOVIEGUIDE® advises extreme caution for THE ADAM PROJECT, which should have been able to get a higher acceptability rating.