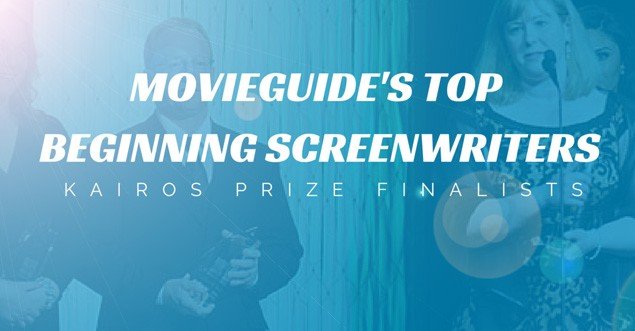 Three winners will be announced Friday night at the 23rd Annual Faith & Values Awards Gala and Report to the Entertainment Industry at the Universal Hilton Hotel in Los Angeles which airs February 21st on the REELZ Channel.

Supported by a grant from the John Templeton Foundation and presented annually by MOVIEGUIDE®, the Kairos Prizes award $50,000 to the top three entries as it celebrates the best new screenwriters from around the world whose work “greatly increases man’s love or understanding of God.”

This year’s 10 finalists are (in alphabetical order):

Bret Boyer of Mesa, AZ for TEXTING WITH GOD

Glenn Brown of Leeds, AL for A SEED OF FAITH

GD Brulato of Sarasota, FL for A HEART OF FLESH

Lori J. Closter of Plympton, MA for TOPPING THE WILLOW

Kenata O. Martins of Los Angeles, CA for IN MY GARDEN

Jeff Peabody of Federal Way, WA for WHEN MOUNTAINS MOVED

Scott A. Peterson of Oak Grove, MN for FOUR DAYS ALONE IN A CAR

Maggie TerryViale of Napa, CA for THE CRY OF THE DAFFODILS

In addition to the Kairos Prizes, the highlight of the MOVIEGUIDE® Awards each year is the presentation of the two $100,000 Epiphany Prizes for Inspiring Movies & TV. Also supported by a grant from the John Templeton Foundation, the Epiphany Prizes honor the best, most inspiring movie and television program of the previous year.