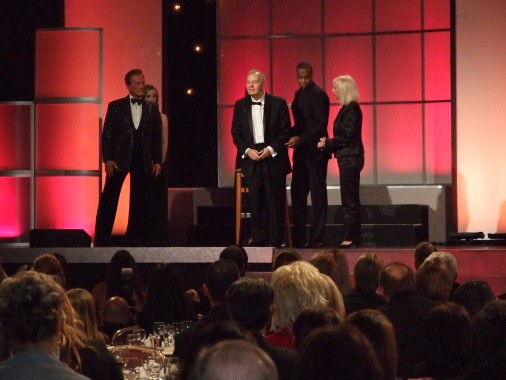 Al Kasha is an award winning songwriter and composer. His songs have been featured in movies and on Broadway for decades with plays like “Seven Brides for Seven Brothers.” His lyrics have graced the lips of

some of music’s greatest stars, including Frank Sinatra and the king of rock and roll himself, Elvis Presley. Aside from being an impressive musical talent, Kasha has also been a powerful voice in Hollywood and on Broadway for the Gospel of Jesus Christ

Kasha’s career launched when he was only 16. He had grown up in a Jewish family in Brooklyn, NY with an alcoholic father. When a man working at a studio across the street heard him sing, his life was changed.

From the singing at the studio, the young man’s success skyrocketed, and within a few years, he was writing songs for Jackie Wilson and Bobby Darin. He later became a record producer, and the head of A&R at CBS Record’s music publishing. Kasha is credited for signing musical legends like Aretha Franklin and Neil Diamond. In 1968, he moved to Hollywood where he wrote Academy Award winning songs with his collaborator Joel Hirschhorn for movies like “The Poseidon Adventure.”

Despite his overwhelming success, Kasha was consumed by his drive for perfection. He developed agoraphobia, a fear of public and open spaces.

“I rarely left the house. People always had to come see me. At this time, my wife and I separated. It’s really difficult to live with a phobic.”

One night he was watching TV when he heard televangelist Robert Schuller quote 1 John 4:18, “Perfect love casts out fear.”

“I heard the word perfect, and it caught my attention. He said God is perfect, and we don’t have to be. I laid my hands on the television set and gave my life to Christ then and there.”

The next day he and his wife went to church with a friend. His wife had been brought up Catholic and had converted to Judaism upon their marriage. At the end of the service, Kasha walked down the aisle to speak with the pastor.

“I didn’t know this at the time, but my wife was walking down the other aisle.”

The newly believing couple attended a bible study at the home of Rosemary Clooney. In just a few weeks, the study was relocated to Kasha’s home and later became known as the Hollywood Bible Study. Al Kasha became an ordained minister in 1984 and, out of the bible study, he and his wife founded a church called Oasis Christian Fellowship.

“When we first started out it was in a store. Now it’s international.”

Since then, Kasha has been a powerful Christian figure in the media. His witness has touched the lives of many of popular artists he has worked with, Bob Dillon and Donna Summer being just a couple of examples. Kasha’s evangelism has lead to salvation for over 180,000 people across the world.

Kasha continues to work in Hollywood and on Broadway today. He is very excited about his current projects, one being the Broadway musical “In a Booth at Chasen’s.” The play narrates the origins of the real life love story between Ronald and Nancy Reagan as it follows their two year courtship in the legendary Hollywood restaurant Chasen’s. Kasha is also working on a feature film about Jackie Wilson, one of the first artists with whom he worked. The movie will tell Wilson’s life story and include music from his career as well as the racism he faced as a black artist in the world of rock and roll.

Through his successful career and his walk with the Lord, Al Kasha has developed four principles by which he lives his life. His principles are inspiring way to marry professionalism, especially in Hollywood, with faith. He also provides valuable advice for anyone hoping to enter the entertainment industry. The first principle is excellence.

In Kasha’s words, “You have to be as good as if not better than your competitor.”

As Kasha learned when he first encountered God, God is the perfect creator. He has also blessed us with many means and avenues to be creative ourselves. As stewards of God, excellence should be something we strive for in our work and in our lives. It will also, by default, lead to a great product.

According to Kasha, “If you are writing for God, that’s what He expects from you.”

Secondly, he advises workers in the entertainment industry in particular to create alliances. It is important for filmmakers to not just make friends with others in their field but also to “go to the other side.” For example, an aspiring actor will not only benefit from knowing other actors but from relationships with directors, writers, editors, and anyone with whom one can build a network.

Kasha’s third principle is research. He suggests studying examples from those who have been successful in whatever field you wish to pursue. Know their work and the path they took to achieve success. Kasha gives the example of an aspiring writer.

The final principle Al Kasha offers is teamwork. According to Kasha, when a filmmaker is able to rely on other skilled workers for the many different aspects of making a movie, both the production and the workers will be much more focused. With teamwork, it is especially important for Christians to exude a Christ-like attitude of servant-leadership. Kasha believes that Christians should not only make an effort to work with each other, but they should be willing to teach other in an environment free from jealousy and strife.

“Work as team. You can’t do all things on your own.”

When asked how he sees God working in the media, he replied, “This year is a great example. Over half of the top box office movies have been family films.”

The rate of wholesome movies shows that more audiences are paying to see movies with values than movies with stars and action. It will be difficult for the success of these movies to go unnoticed.

“What MOVIEGUIDE® does, we need more of,” Kasha states. “I often use Ted’s statistics when I’m talking with producers.”

Al Kasha’s success as a musician and his powerful influence as a Christian is nothing short of inspiring. His life and career are extraordinary examples of the power of the Gospel of Jesus Christ in the hands of a creative God and a willing servant.

In closing, Kasha recommended Ted Baehr’s book, HOW TO SUCCEED IN HOLLYWOOD (WITHOUT LOSING YOUR SOUL), with the comment:

“Ted Baehr’s Book, HOW TO SUCCEED IN HOLLYWOOD (WITHOUT LOSING YOUR SOUL) is a must for every person entering show business. Christians do belong in Hollywood, as long as there is not too much Hollywood in the Christian. Pick it and buy it today, you will be glad that you did.”