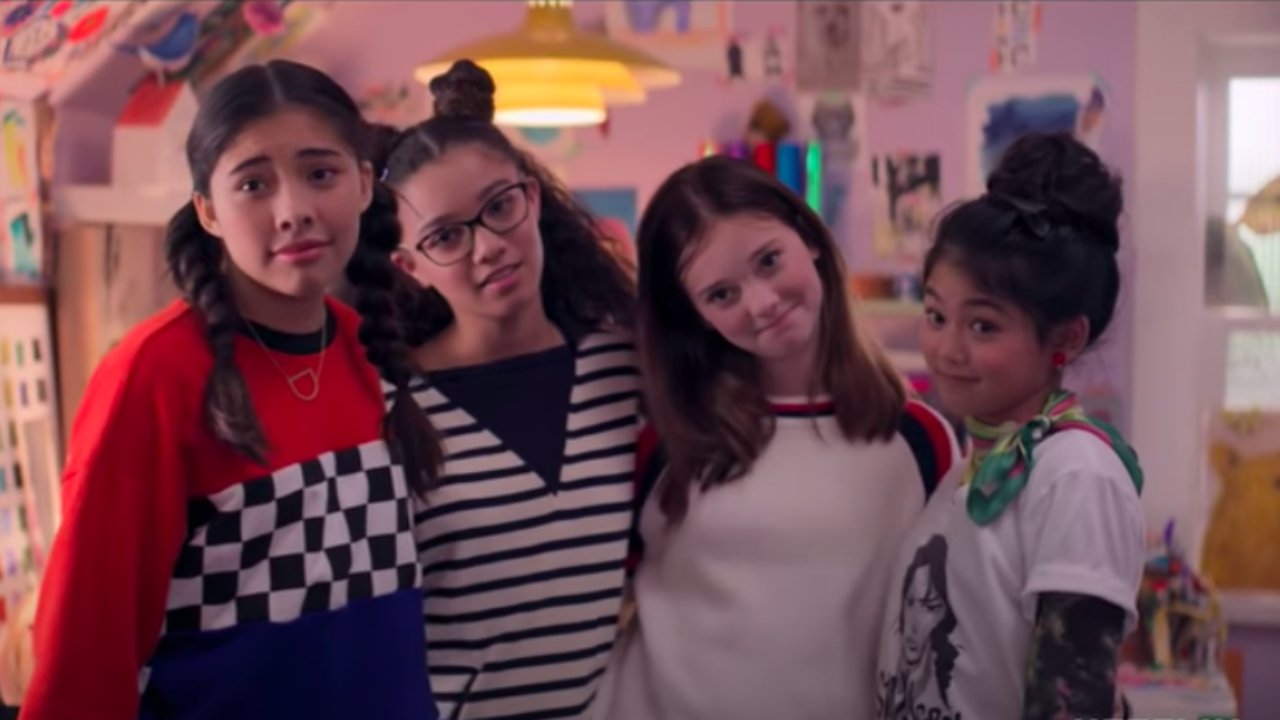 THE BABY-SITTERS CLUB is a Netflix original series that debuted on July 3, 2020. The series is a reboot of the novels that share the same name, but unfortunately, the relatively innocent storylines we loved from the books are nowhere to be seen. One episode features a transgender child, and other episodes mention that a character has gay dads. The series also highlights witchcraft and New Age beliefs.

Netflix decided to release THE BABY-SITTERS CLUB during a time when life as we know it seems to be constantly changing and shifting. The release of such a reboot has the potential to be a nostalgic treat for viewers of all ages. Unfortunately, the series does not reflect Christian worldviews or messages, making it impossible to recommend for families.

Kristy Thomas is a 13-year-old girl from the fictional town of Stoneybrook, Connecticut. After watching her mother struggle to find a babysitter for her little brother, Kristy comes up with an idea that could help parents while also allowing her and her friends to earn extra money. After recruiting her friends Mary Ann, Claudia, and new girl Stacey, the Baby-Sitters Club is officially launched. THE BABY-SITTERS CLUB follows the journey of each of the club members as they learn, grow, and seek to find their place in the world. Some of life issues that are examined include family relations, divorce, friendship, bullying, gender identity, leadership, and responsibility.

THE BABY-SITTERS CLUB is rated TV-G, but there are some signficant cautions.

While there is no obscene language, there are over a dozen OMG profanities throughout the season, including a use of the phrase, “God, no!” There is no violence, nudity, or sexual content. In one episode a 13-year old boy and girl briefly kiss. There are also mentions of female menstruation and a character gets her period for the first time. The topics of homosexuality and gender identity come up frequently.

One of the characters on the show has a gay father and Facetimes with him and his significant other. Other episodes include a transgender child, a boy who remarks about having a crush on another boy, and a reference to the Netflix series, QUEER EYE. Drinking is featured when a character’s father anxiously swigs some champagne at a wedding.

THE BABY-SITTERS CLUB reflects a worldview that is heavily focused on Occultism, witchcraft, and some New Age beliefs. Mary Ann attends a new moon ceremony with Dawn. The ceremony is hosted by Dawn’s aunt, who is a spiritual healer and a tarot card reader. This character later officiates a wedding ceremony. Kristy’s 7-year-old stepsister, Karen, is obsessed with witches, curses, and dark spirituality. In a Halloween episode Karen has a funeral for her doll. When asked if a prayer should be said, Karen coldly replies that her doll was an atheist.

THE BABY-SITTERS CLUB has a few redemptive elements. The show encourages positive relationships between family members, especially those whom you may struggle to get along with. Claudia makes peace with her overbearing older sister. Mary Ann works out issues with her overprotective father. Kristy comes to terms with her parents’ divorce and her mother remarrying. She even learns to get along with her stepdad and bonds with her stepsister. Friendship, forgiveness, honesty, and responsibility are all celebrated and encouraged.

The series has some similarities and differences from the original novels. Most of the characters share the same personality traits and stories, such as Kristy’s bossiness and Claudia’s affinity for art and junk food. Readers will appreciate the nods to future character additions, “kid kits,” and the use of a traditional landline telephone (which was purchased on Etsy). Probably the most noticeable overarching difference between the books and the new series is the stronger focus on feminism and social justice issues. While some of the original characters may have already been decidedly feminist, it has now been emphasized more strongly. Dawn’s aunt even remarks that women were historically called witches if they refused “to conform to society’s expectations as to what they should be.”

THE BABY-SITTERS CLUB also assumes a strong politically correct stance on social justice issues. Using main character Mary Ann as an example, after taking a transgender child to the hospital to receive medical treatment, she is praised for sternly informing doctors and nurses that they must acknowledge the child’s chosen identity.

Also, in a later episode, some of the babysitters organize a peaceful protest after the summer camp refuses to stop charging extra for craft projects. The protest turns the camp environment upside down and impacts the progress of other characters who are working on projects that promote responsibility and growth. While the issue of the protest is never resolved, the characters manage to negotiate not being sent home early and are instead promoted to camp counselors in training.

It’s all too much for a TV-G rating marketed to impressionable girls.

It’s heartbreaking to see Netflix take what was a relatively wholesome book series and turn it into a politically correct, agenda driven series.