A HERO’S JOURNEY: Behind the Scenes of CAPTAIN AMERICA: THE FIRST AVENGER 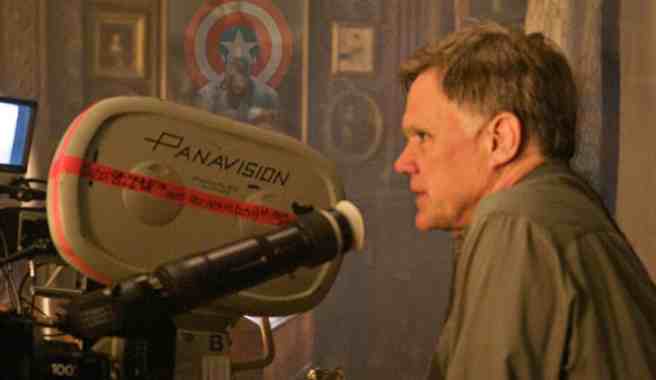 Joe Johnston is one of MOVIEGUIDE®’s favorite directors. Several of his movies, including HONEY I SHRUNK THE KIDS, THE ROCKETEER and OCTOBER SKY, have been MOVIEGUIDE® Award winners. Even when they’re not, however, his movies always have the energy and entertainment value captivate most audiences.

So, we jumped at the chance to get an exclusive interview with him for his newest movie, CAPTAIN AMERICA: THE FIRST AVENGER.

Johnston said the movie’s World War II setting makes it stand apart from the other Marvel movies like THOR and IRON MAN.

“That to me was a real advantage,” he said.

“It was the only superhero movie I ever really wanted to do,” he added, “because he’s not really a superhero. He’s just a guy next door who gets this amazing gift and then he gets to go off and save the world with it. It’s wish fulfillment, and it’s sacrifice. It’s a really great hero’s journey.”

Don’t give up is the movie’s most striking message for Johnston.

“Somebody once told me that there’s always a father/son issue [in my movies], which wasn’t apparent to me. OCTOBER SKY is probably the best example of it. Even THE WOLFMAN in a weird way. And, JUMANJI. What appeals to me are the universal themes that we all can relate to, whether it’s family or this one, where it’s [about] determination and not giving up. If you take a really simple, basic element like that and build a story around it. . .”

Before shooting the movie, Johnston had the cast read through the script with him.

“I never rehearse because something always happens in rehearsal that you can’t duplicate. What is helpful is to read through the script with the cast, and they’re not performing, they’re reading. You get a chance to hear how the words sound, and you often get a chance to hear unnecessary dialogue.

“Mostly what I do in a read through is take a red pen and cross lines out. Most times what writers will do is they’ll say something, then say it again with slightly different verbiage. Audiences don’t need to be told twice. Tell them once, they’ll understand.

Does he think the movie’s patriotic, American themes and atmosphere will translate into other cultures?

“I think it can,” he replied. “We were really careful in making this picture not to wave the flag. It’s called CAPTAIN AMERICA and clearly there are American themes in it, but there’s also international themes. If you boil it down to his [Steve Rogers aka Captain America’s] story, he’s just a good guy fighting evil, and he’s just determined to do the right thing. We were really concerned if the world’s going to accept a movie called CAPTAIN AMERICA, but if we can sell what the movie’s about to the world, they’ll go see it. It’s not about America. It’s about this guy who’s just ready to sacrifice himself to do the right thing.”

“Steve essentially is a man. . . a normal person,” he said. “He’s certainly at the peak of human endurance, but it’s still human endurance. So, if he gets shot, as he does briefly in the movie, he gets grazed, he could get killed. . . . He’s slightly stronger than your average Joe, but he’s not a Norse god, he doesn’t have a green ring, he doesn’t have an iron suit. . . and that wish fulfillment of seeing him struggle and endure and emerge victorious is, I think, what going to the movies is all about.”

Feige also believes the movie’s 1940s setting helps set it apart from the other comic book movies this year. In fact, Johnston said they patterned the movie after RAIDERS OF THE LOST ARK, which is set during the period right before World War II and is one of the most popular and critically acclaimed adventure movies of all time.

“RAIDERS was made 30 years ago now,” Johnston noted. “It still feels fresh, and I wanted CAPTAIN AMERICA to feel like that, to feel like it wasn’t a film made in the 40s – it was a film about the 40s made today.”

To Johnston, there’s little difference between shooting a big picture like CAPTAIN AMERICA or something smaller like OCTOBER SKY.

In both cases, he said, “I hire really high-paid professionals to help. The advantages of a picture like this is that they let you really get the best team.

“I had great support,” he noted. “We shot the whole thing in the UK. And, I took a lot of American crew over, but I had a great UK crew. Everyone wants to do a great job, and everyone loved the script, and they loved the cast and the designs and everything. If you get everybody behind it, you can’t go wrong.”

Johnston concluded, “If you can translate your thoughts to the artists and the technicians, you can achieve it.”

The stars of the movie enjoyed working with Johnston, they said.

“He lets the cameras roll and encourages us to try other things,” said Hayley Atwell, who plays Steve Rogers aka Captain America’s love interest, Peggy Carter, a British intelligence officer working with the Americans. “He was always open to suggestions and possible script changes.

“There was a sense of humor on the set,” she added.

“He really gave us a lot of freedom,” Sebastian Stan, who plays Captain America’s childhood friend “Bucky” Barnes, agreed. “We were allowed to take risks. . . and sometimes it didn’t work. He didn’t make you feel like you had to constantly walk up to him and ask permission, but a lot of great things came from that.”

Stan added that Johnston trusts himself when it comes to making a movie like CAPTAIN AMERICA.

“He really knows what he wants,” he said. “And, he doesn’t force actors or force the situation.”