Children Are Being Exposed To Shocking Levels Of Sexual Content 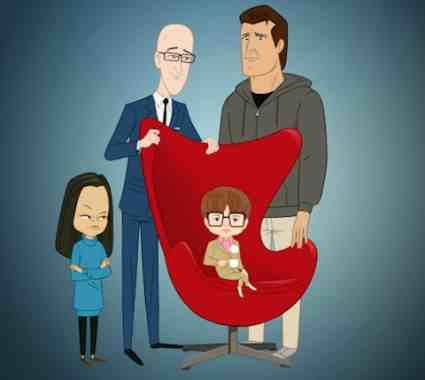 This probably won’t shock most people because we live in an age where the envelope has been pushed so far it’s disappeared over the horizon.  According to the Daily Mail, pink and leopard-print thong panties with no crotches sized to fit a seven-year-old were being sold at Kids N Teen in Greeley, Colorado.  The panties were yanked after a mortified mother complained. As one writer put it: “It’s a new kind of memory: A daughter’s first pair of crotchless panties.”

It’s also a sign of the times when a retailer decides there’s nothing wrong with selling sleazy leopard-print thong panties with a split crotch alongside stuffed animal backpacks.

While I’m on the subject of seven-year-olds, the Parents TV Council (PTC) reports that there are some disgusting children’s programs being aired on TV during the family hour.  The PTC released a Special Report “exposing the shocking levels of sexual content in animated programs on cable networks popular with children.”  One such program is “Allen Gregory.”  According to the PTC “The program’s namesake, Allen Gregory, is a precocious seven-year-old who has sexual fantasies about his sixty-something-year-old school principal.  The program includes Allen circulating rumors of a sex tape of him with the principal; and some of the most explicit language imaginable, including vulgar euphemisms for male anatomy and bleeped f-words.”

Gone are the days when the producers of children’s cartoons would sooner have their hair set on fire than allow cartoon characters to use any sort of profanity.  I mean, can you imagine Mickey Mouse and Crusader Rabbit using the f-word?  The bad news is that R-rated material that includes gross profanity has wormed its way into many animated children’s shows.

“Adult content isn’t just creeping into the cartoons that kids today are watching the most; it has overtaken much of that animated programming. We’re not talking about cartoon characters slipping on banana peels and ramming into doors. Our data demonstrates that today’s norm is profanity-laden storylines involving everything from rape and cocaine to STDs and crystal meth. There is now more sexual content on these cartoons than violence – even when counting traditional ‘light’ cartoon violence.”

Does this make you angry?  It should!  Unprincipled entertainment executives are going to great lengths to expose children to grunge.  And equally unprincipled advertising executives are willing to do just about anything to sell their products, including exposing youngsters to filthy images that are meant to attract adults.

This is the godless liberal mindset – anything goes, nothing is off limits, not even innocent children.

While liberals are busy making it ‘cute’ for a seven-year-old to have sexual fantasies about a senior citizen (seems kids are being programmed by perverts that prefer the term “intergenerational sex” to pedophilia) conservatives are working their tails off to counteract what sleaze balls are doing to corrupt the next generation.  For those who haven’t noticed, the people trying to counteract the lack of moral restraint in our society are conservatives!

David Kupelian wrote an article titled Selling Sex in the U.S.A. In his piece he noted:

David wrote the article seven years ago.  So you can bet these numbers have climbed.

Before I move on, I need to point out that the TV and movie ratings standard is woefully inadequate and must be revamped without further delay.  Explicit language and graphic sexual situations air on programs rated TV-PG and movies rated PG-13.

Fox Entertainment’s prime time Emmy nominated musical series “Glee” is viewed by tens of thousands of teenagers, especially girls.  On November 8, the hit show featured two high school age couples losing their virginity.  One couple was heterosexual, the other homosexual.  Not surprisingly the ‘gay’ couple was featured on the cover of Entertainment Weekly with the headline: “Gay Teens On TV – How a bold new class of young gay characters on shows like ‘Glee’ is changing hearts, minds and Hollywood.” The Gay and Lesbian Alliance Against Defamation (GLAAD) nominated “Glee” for best TV comedy series that promotes homosexuality.

The PTC “slammed the televised sexual encounters – but explicitly stated that the homosexuality of one of the couples was not an issue.

“The fact that “Glee” intends to not only broadcast, but celebrate children having sex is reprehensible,” said PTC president Tim Winter. “The gender of the high school characters involved is irrelevant.”

For those who are still in the dark regarding the health risks inherent in “gay” sex, here’s an excerpt from an unbiased 2010 report from the Centers for Disease Control and Prevention titled HIV among Gay, Bisexual and Other Men Who Have Sex with Men:

“Gay, bisexual, and other men who have sex with men (MSM) represent approximately 2% of the US population, yet are the population most severely affected by HIV and are the only risk group in which new HIV infections have been increasing steadily since the early 1990s. In 2006, MSM accounted for more than half (53%) of all new HIV infections in the United States, and MSM with a history of injection drug use (MSM-IDU) accounted for an additional 4% of new infections. At the end of 2006, more than half (53%) of all people living with HIV in the United States were MSM or MSM-IDU. Since the beginning of the US epidemic, MSM have consistently represented the largest percentage of persons diagnosed with AIDS and persons with an AIDS diagnosis who have died.”

Parents are constantly warning their children against risky behaviors such as smoking, doing drugs, drinking, premarital sex, driving too fast, too much salt, trans fats, yet we don’t warn them of a disease-ridden sexual activity such as sodomy?  It is unloving not to warn people of risky behaviors, is it not?   It is loving to say to a child “Smoking causes cancer!”  You really have to hate someone to deliberately withhold the truth from them.

A few years ago, I addressed the moral decay in America in a piece I wrote titled Parents, listen up!  In it, I offered some ways for parents to protect their kids from the left’s indoctrination:

We’ve fallen into the pit of depravity; and, if we’re going to emerge from the seemingly bottomless pit we’ve dug for ourselves, Christians have got to get busy.  Our success depends on two factors.  First, parents must instill in their children a Christian worldview on a variety of moral issues, from premarital sex and bearing babies out of wedlock, to gambling and drug use. Second, parents must address what’s going on in the government-run-institutions-of-indoctrination (otherwise known as public schools).  Countless “progressive” teachers are stealthily implanting in student’s minds the idea of rejecting their parent’s values and adopting a leftist ideology.

Make no mistake: godless liberals are winning the battle for the minds and hearts of our children.  As I pointed out in my article:

A majority of America’s kids–Christian or other–are steeped in the culture.  They’re being exposed to raunchy movies, TV programs, DVDs, music, also graphic violence, explicit sex, even witchcraft, without any guidance from their parents or church leaders.  Lewdness has become so commonplace that parents hardly notice it anymore.  But, Jesus notices. And, here’s what He says about protecting children: “If anyone causes one of these little ones who believe in me to sin, it would be better for him to have a large millstone hung around his neck and to be drowned in the depths of the sea” (Matthew 18:6).

Editor’s note: Marsha West is a religious/political-based writer and owner of EmailBrigade.com.  As well, she is the founder and editor of the Email Brigade News Report, a biweekly news resource for people of faith that is chalk-full of critical news and information.  Marsha is dedicated to restoring some common sense to our nation by encouraging people to thoroughly understand the issues, both religious and political, that impact American lives. Marsha’s articles have been published widely online and in print.  She is a regular contributor to News With Views, Renew America, Worldview Times, Christian Research Network, Conservative Crusader and a guest columnist for American Daily and Mich News. Marsha is currently writing a fiction series for Christian children to equip them to defend their faith and live for Christ. This article is reprinted by permission. Copyright by Marsha West, 2011.  All rights reserved. Visit Marsha’s website: http://emailbrigade.com

On the Unhealthy Homosexual Lifestyle—Heterosexuals Organized for a Moral Environment (H.O.M.E)  In this article H.O.M.E. offers an abundance of information on homosexuality that includes links for further research.  Also included is info on the health issues inherent to lesbianism.  Read the article to the very end.

Words are whatever I say they are—By Marsha West