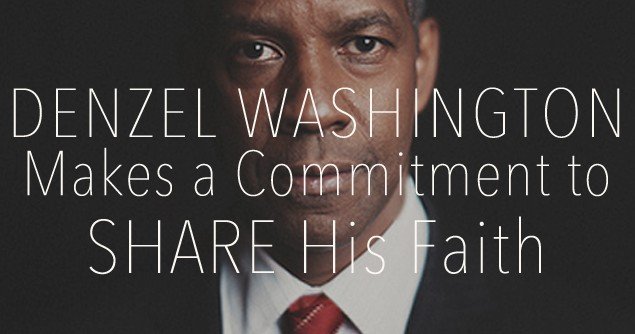 Denzel Washington is no stranger to the spotlight. Famous for movies like GLORY and REMEMBER THE TITANS and with two Academy Awards, he is one of the most accomplished actors in Hollywood. However, on Saturday those accolades were set aside when he was introduced as the keynote speaker for the 14th Annual Church of God in Christ Cares Banquet.

Presiding Bishop Charles Blake, also Washington’s pastor, introduced the actor not based on his achievements in the industry, but based on his dedication to the church.

“But, as his pastor, I just want you to know him. Here is a man who has shown great love and great respect for his church and his pastor.”

Blake spoke about how he met Washington in the early 1990s. At that point the actor had already been attending his church for sometime. He soon brought his wife, Pauletta, and as their family grew it became a family affair.

“They were there every Sunday,” Blake said. “They were involved. Their children worked in our nursery and attended Sunday school. Whenever there was a need Mr. Denzel Washington was always overjoyed to respond with generosity…unprecedented generosity to the life of our church.”

Washington was excitedly waiting next to the stage, and when he came up to speak, began sharing his faith journey with the audience. He shared how he remembered his father, who was a pastor for more than 60 years, preparing to come to this event each year.

“He would get his best two suits together and my mother would fry him a tin of chicken and prepare a thermos of coffee, and he would make the drive,” Washington said. “I know he’s smiling in heaven, seeing his son doing the best I can do today, by the grace of God.”

Washington then began to honor the mission of the banquet, which is to fundraise for international disaster relief as well as scholarships. He shared from his own story to illustrate just how important it is to invest into the lives of young people both spiritually and financially.

Forty years ago a woman in his mother’s beauty shop spoke great achievements over his life, at a point when that seemed far from likely.

“In this 40 year journey, I guess she was right,” he said. “Through my work I have spoken to millions of people. In 2015, I said I’m no longer just going to speak through my work. I’m going to make a conscious effort to get up and speak about what God has done for me.”

Washington also shared how he believes the power of prayer is a large part of what helped him reach the point he is at today.

“I remember saying to my mother at a time when I was feeling myself, ‘Ma did you ever think that I was going to become this,’” he shared. “She said, ‘Boy, do you know all the people who have been praying for your behind … all the prayer cloths, and prayer meetings?’ And she made me clean the windows.”

He emphasized how important it is to live out one’s faith and to trust God’s plan through it all.

“There has never been a time when God didn’t, direct, protect, or correct me,” Washington said. “There may have been times where I was less than faithful to Him, but He had faith in me.”