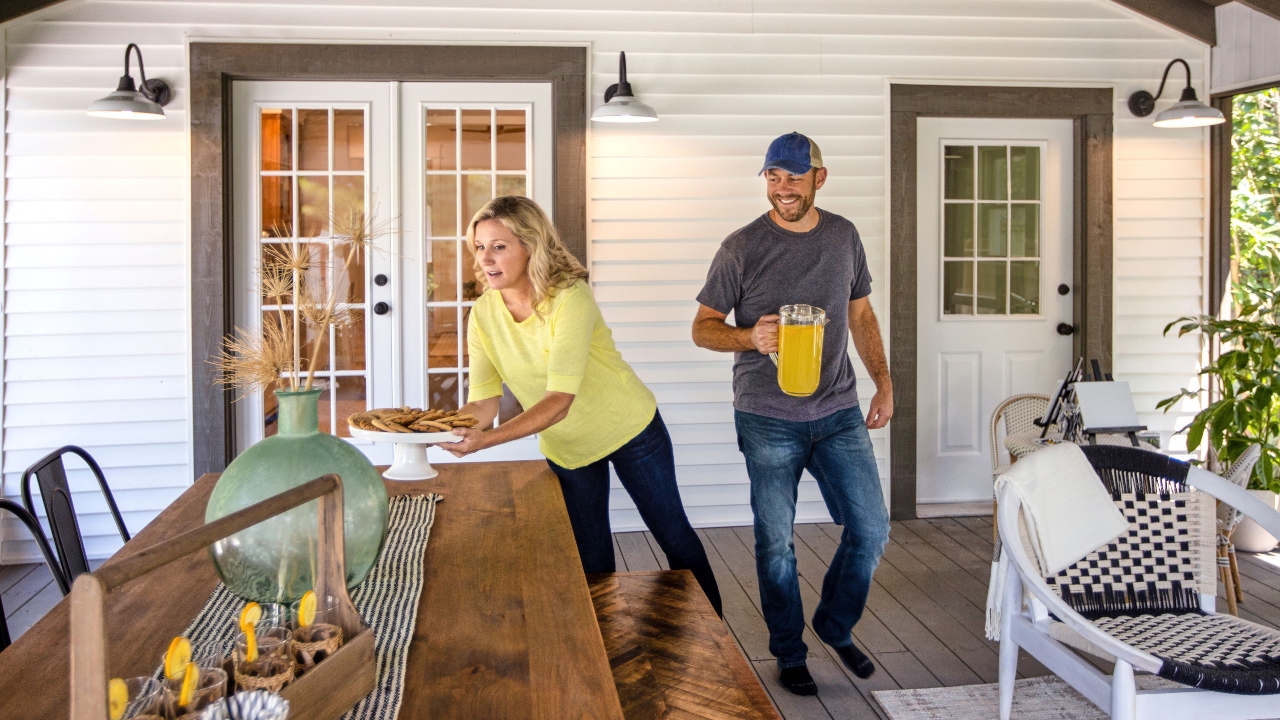 Jenny Marrs had just started to talk about the role family played in her hit HGTV show, FIXER TO FABULOUS, when she stopped short.

“Hang on one second, I’m sorry. Speaking of our family,” Jenny’s voice trails off over the phone as I hear a small commotion in the background.

“Okay, sorry, we’re doing big risk because Luke has suddenly decided he wants to potty train,” Jenny says when she returns. “He’s only 19 months old and so he keeps trying and so I was like we’ll throw on some underwear. It’s fine, but now with his sister around, this is going to go bad.”

She’s laughing as she talks about her children who can be seen in both seasons of FIXER TO FABULOUS on HGTV. In season 2, Jenny says the family was more comfortable because the camera crew had been there for two years.

“We wanted to be really careful about how we incorporated our kids, but it wasn’t an option not to include them because they’re just part of our lives,” Jenny says.

“We don’t want their life to be interrupted by this. The camera crew was here and kids were coming home from school, they just kept rolling. It just really was sort of organic, and the kids are always out helping from the shop.”

Beyond family, faith holds the Marrses together.

The television host continues, “I mean, yes, we’re renovating houses, but we’re hoping that just people see something different in our family. They maybe then go to my Instagram and they are like, ‘Oh wait, what, what is this God she’s talking about?’

“Our goal as a family is always to bring light into the world however we can do that, and if we can do that through a home renovation show, then that’s what we’ll do.”

The Marrs family demonstrated that firsthand as they worked through the COVID-19 pandemic for their show’s second season.

“It added a whole lot of complexity to the season,” Dave says. “It turned out that we were fortunate in Arkansas that really construction was always deemed essential. As long as we were following all the guidelines, we could keep going.”

Even when the family wasn’t filming, Dave was still hard at work as a contractor serving his community. Dave says that people from all around the country contacted him, asking him to build their house because they saw his work on television.

“The cities of Bentonville and Rogers and all the surrounding cities have been so supportive because they know what the impacts that can be on retail and on tourism if one of these shows is successful,” Dave says. “I don’t know if we could quantify it, yet but I think we’re just we’re just getting rolling with it so hopefully, hopefully it’ll be great things in the future.”

Watch Dave and Jenny in the FIXER TO FABULOUS season 2 finale on January 26.