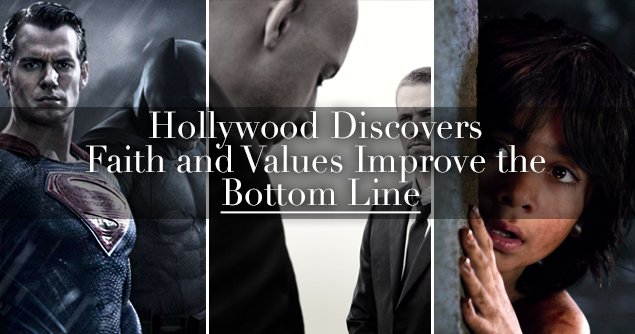 In the last few years, there has been a tidal wave of Hollywood movies based on biblical topics and featuring overtly evangelistic stories, including such movies as RISEN, THE YOUNG MESSIAH, and APOSTLE PAUL as well as movies like MIRACLES FROM HEAVEN, UNBROKEN, and HEAVEN IS FOR REAL. There are also an increasing number of independent movies with faith and values, such as GOD’S NOT DEAD and WAR ROOM, that are racking up significant numbers.

This increased move toward faith and values (and even toward moral principles in blockbusters like THE JUNGLE BOOK, FURIOUS 7 and BATMAN V. SUPERMAN) isn’t just the result of one or two successful movies. Nor is it the result of more evangelical filmmakers in Hollywood. It’s the result of 20 years of promoting the Annual MOVIEGUIDE® Report to the Entertainment Industry, which shows how to make more money at the box office.

The work of the filmmaker can be enhanced by faith and moral business practices in many varied ways.

Numerous successful movies of the distant and recent past have done this, from popular favorites like DRUMS ALONG THE MOHAWK starring Henry Fonda and Claudette Colbert and SAN FRANCISCO starring Clark Gable and Jeanette MacDonald during the Golden Age of Hollywood, to modern blockbusters like FROZEN and AVENGERS:  AGE OF ULTRON in the 21st Century.

Naturally, the Bible has some important things to say about work.

For example, God tells the Prophet Isaiah in Isaiah 65:22 that those who work diligently for the LORD, and for the benefit of others, will “enjoy the work of their hands.” Proverbs 10:4 also says, “Lazy hands make a man poor, but diligent hands bring wealth.” This verse is similar to what Paul says in 2 Thessalonians 3:10:  “The one who is unwilling to work shall not eat.” Paul adds in Colossians 3:23, however, “Whatever you do, work at it with all your heart, as working for the Lord, not for human masters.”

In the last 20 years or so since MOVIEGUIDE® began reporting to Hollywood decision makers its findings in the Annual Report to the Entertainment Industry, the number of movies with strong faith and values has increased 470 percent.

Also, the financial success of such movies has grown exponentially, from only a couple hundred million dollars overall to significantly more than $5 or $7 billion annually! And, that doesn’t include all the money that movies with strong morally and spiritually uplifting content make overseas and on home video.

Success isn’t just measured in percentages, dollars and cents, however.

Thus, even the work of making entertaining movies for a mass audience can be a great benefit not only in regards to financial prosperity but also with regard to one’s personal growth and fulfillment, but especially when you apply biblical principles of faith and values to your endeavors.

MOVIEGUIDE®’s own work of honoring the people behind family-friendly movies with strong faith and values has itself prospered, as the above statistics clearly suggest.

God has mightily blessed MOVIEGUIDE®’s work, but we couldn’t have done it without the faithful support and prayers of our many friends and allies. So, we pray that God will continue to bless this work of our hands, and the work of the filmmakers and friends who have responded so positively to our appeals to honor God and redeem the entertainment industry by applying faith and values.

Adhering to moral business practices and Christian, biblical principles of faith and values is extremely rewarding work. No doubt about it!

For more about our Report to the Entertainment Industry and about our advocacy work in Hollywood, please go to: www.movieguide.org

Editor’s Note:  Ted Baehr is Publisher of MOVIEGUIDE® (www.movieguide.org), a family guide to entertainment, and the Chairman of The Christian Film & Television Commission®.  An award-winning media authority, he is used by God to redeem the mass media and teach families to be media wise.  His many books include How To Succeed In Hollywood (Without Losing Your Soul) and The Culture-Wise Family, among many others.