In Remembrance of Professor John Rassias 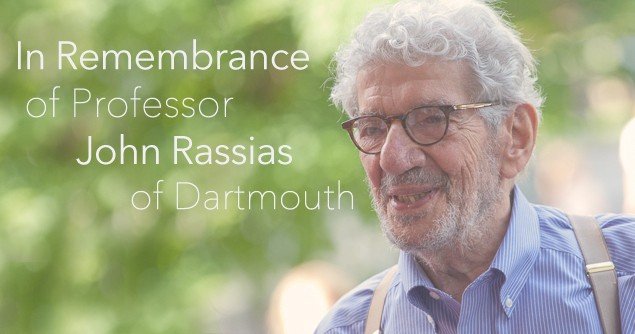 In Remembrance of Professor John Rassias

One of the best language professors of all time, Prof. John Rassias of Dartmouth, who created a revolutionary method of teaching languages, which changed language instruction throughout universities and schools and throughout the U.S. government, died on Dec. 2 near Dartmouth University, at his Norwich, Vt. home.

John got to Dartmouth about the same time I did, 50 years ago. At that time, I was a wild free spirit, breaking the rules and indulging in the humanist culture of the 1960s.

When confronted with the need to prepare a paper in French, I asked John Rassias if I could instead write a play in French, since I had grown up on Broadway. The result was a symbolist play, L’INSTITUTION. My major desire in writing this play was that we could perform it at several girl colleges, since Dartmouth was all male at the time.

So, John helped take the play on the road, and, in the process, he found out that students learn French better when it was presented in a dramatic context, where they had to act out the roles. This became the heart of the Rassias method, a healthy does of theater to immerse the student in the culture. Soon, he used it to help teach the Peace Corps, and then it spread to language teachers, business executives, military personnel, and many others.

Years later, I came to Christ in 1975 and once upon a time coming back to Dartmouth, John agreed to come on the Board of Reference of the Christian Film & Television Commission®. At that meeting, he admitted to my wife, Lili, that, by refusing to take an exam and write a term paper, writing that play changed language instruction for years to come.

What does this have to do with MOVIEGUIDE®?

Well, pressing my luck with John instead of opting for a normal academic career, we set up a new honors major, in which I was one of the first few students, which allowed me to study contemporary French, German and English poetry overseas in those countries. For this honors major, I developed a totally new approach to analyzing poetry called a Notion of Genre, which used a three-dimensional matrix. This thesis also changed the nature of comparative literature at Dartmouth and earned a high letter of commendation.

All of this to say that John and I had a tremendous rapport, and I’m extremely grateful he gave me the opportunity to create and study outside the box.

I pray that John is in Heaven to meet The Lord and Savior, Jesus Christ, and I praise God that God uses even the weak and lost and broken to transform the world.