Narnia Beckons: The Christian Worldview of VOYAGE OF THE DAWN TREADER 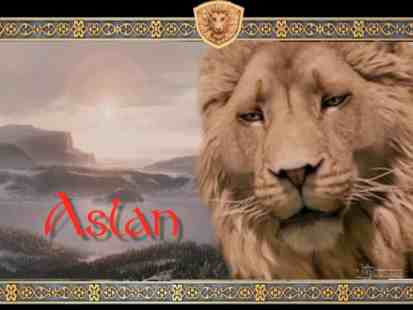 Editor’s Note: If you have not read the book or seen the movie, please be aware there are some plot spoilers in the following discussion.

Erudite Christian author and evangelist/philosopher C.S. Lewis was pretty clear about the basic Christian symbolism in the seven books of his children’s classic, THE CHRONICLES OF NARNIA.

For instance, the author once wrote about the character of Aslan, the Son of the Emperor Beyond the Sea:

“He is an invention giving an imaginary answer to the question, ‘What might Christ become like if there really were a world like Narnia, and He chose to be incarnate and die and rise again in that world as He actually has done in ours?’”

This is what happens in the first book, THE LION, THE WITCH AND THE WARDROBE, which tells the story of the death and resurrection of Jesus Christ through Aslan the lion, and its effect on Edward’s regeneration, redemption and salvation as well as the healing of Narnia from the curse of the White Witch.

Lewis continues this Christian symbolism in the third book, VOYAGE OF THE DAWN TREADER, which 20th Century Fox is releasing as a movie Friday, Nov. 10. Although the movie skips over some of the Christian symbolism from the book and changes the plot to be more dramatic and cohesive, much of the symbolism is still there.

C.S. Lewis writes in such a way that there are layers of meaning in THE CHRONICLES OF NARNIA, as explained in the book NARNIA BECKONS. Clothes, for instance, have various different meanings. By putting on the robes in the wardrobe, the children are clothing themselves in effect in their future royal robes.

Lewis and Tolkien went way beyond this. Lewis’s work dealt with many levels including a cosmology that brought the spiritual world into the material world, what the Irish like Lewis would call “a thin place.”

The church used to look at reality in terms of many different levels, such as:  the kerygma or message, which is presented clearly here in this movie; the incarnational, which is the presence of God as manifested in Aslan; and, the sacramental, which is an outward and visible sign of an inward and spiritual grace. In other words, regarding the sacramental, when a married person wears a ring, the ring is not the marriage, it is an outward sign of the spiritual condition of being married. This is missing in the movie to a degree, although the filmmakers have done an incredible job of capturing some allegorical and metaphorical meaning.

Today, Christian evangelicals usually focus on the message; Catholics often focus on the sacramental; and, others such as traditional main line Protestants focus on the incarnational — and so, the different groups of the church can barely understand each other. C.S. Lewis understood this and was trying to bring it all together.

In one way, both the book and the movie as a whole tell the story of a Christian pilgrimage to a sacred side, the border between Narnia and Aslan’s country, i.e. Heaven.

That journey begins with a symbolic baptism when Lucy, Edward and their silly, mean cousin, Eustace, suddenly find themselves in the Narnia ocean near the Dawn Treader, on which King Caspian is leading an expedition to find the seven lost lords who were friends of his father.

Both in the book and the movie, the seven lost lords remind us of the seven churches in Revelation and the seven angels associated with those churches, to whom Jesus Christ asks John to write individual letters, as well as the seven deadly, cardinal sins. Some of that symbolism remains so that it is clear that the lord who fell into the dragon lake and turned into gold succumbed to greed, but much of the other symbolism is sacrificed for the more dramatic plot.

One of the greatest, most moving, episodes in the book and the movie is the special transformation, repentance, rebirth, and baptism Eustace undergoes when he is changed into a dragon because of his sinfulness and greed.

The image of the dragon scales covering Eustace remind us visually of his, and our, grotesque sinful nature.

Eventually, Eustace recognizes his need for salvation and deliverance from his sin. Full of repentance, he tries to scrape the dragon scales off by himself, but he needs Aslan, the symbolic representation of Jesus, to step in and deliver Eustace from his sinful nature and baptize him. This is the regeneration, salvation and baptism of Eustace. In effect, Eustace is “born again” (see John 3:1-21.

Eustace isn’t the only character undergoing a spiritual journey in VOYAGE OF THE DAWN TREADER.

For example, with Aslan’s help, Lucy must avoid the temptation to be more like her sister Susan, who is outwardly beautiful but has drifted away from her belief in Aslan.

There’s also the example of Reepicheep the Adventurous Mouse. Reepicheep longs to actually travel to Aslan’s “country” beyond the sea, the representation of Heaven in the Narnia Chronicles. Aslan tells him and the others, however, that, once they go to Aslan’s country, they cannot return. Thus, Reepicheep, who sails alone atop a giant blue wave to enter Aslan’s country, is like Elijah, the great prophet who didn’t die but entered Heaven in bodily form.

This scene is probably the emotional high point of the entire book and movie.

At the boundary between Narnia and Aslan’s country, Aslan tells Lucy and Edmund that he exists in their world too.

“But there I have another name,” he says. “You must learn how to know me by that name. This was the very reason why you were brought to Narnia, that by knowing me here for a little while, you may know me better there.”

Aslan is, of course, referring to Jesus Christ, the incarnate deity in our human world (in the books, Narnia is depicted as an animal world to where humans from Earth have found their way, which is why Aslan appears like a lion, a reference to Jesus Christ as the “Lion of Judah” in Revelation 5:5).

The good news about the new movie version is that it keeps Aslan’s important reference to Jesus Christ in this piece of dialogue.

In the book, during the visit to the Dark Island, Aslan continues this comparison with Jesus by sending an albatross that at first “looked like a cross” to lead them out of the darkness and into the light.

A succinct summary of who Jesus Christ is can be found in the beautiful passage in Colossians 1:15-17 (NLT):

“Christ is the visible image of the invisible God. He existed before anything was created and is supreme over all creation, for through Him God created everything in the heavenly realms and on earth. He made the things we can see and the things we can’t see — such as thrones, kingdoms, rulers, and authorities in the unseen world. Everything was created through Him and for Him. He existed before anything else, and He holds all creation together.”

Finally, in the movie and the book, as the Dawn Treader sails nears Aslan’s country, the light from the sun gets brighter and brighter, and everyone’s vision is improved by the ocean water, which has gotten sweeter and sweeter.

As far as the books themselves go, a great place to start is NARNIA BECKONS by MOVIEGUIDE® Founder and Publisher Dr. Ted Baehr and Dr. James Baehr, available at www.movieguide.org.