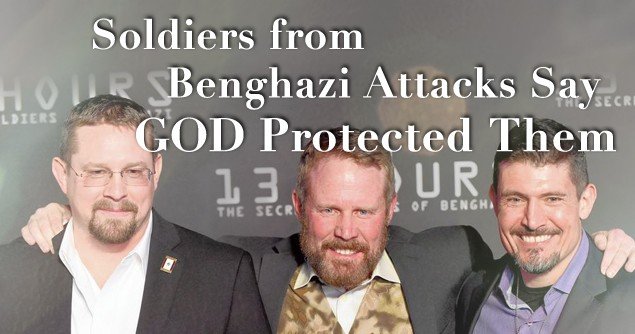 At a recent press junket, the “secret soldiers,” who defended the CIA outpost when the jihadists attacked in Benghazi, said that they know God protected them from overwhelming odds during the attack. The recently-released movie 13 HOURS: THE SECRET SOLDIERS OD BENGHAZI, directed by Michael Bay, is based on the real-life story of six CIA contractors who risked their lives defending people inside the U.S. State Department’s Mission Control Compound during an attack in 2012. (Read the Movieguide® review here.)

“That night when I was shooting, the scene where we got attacked at the consulate. I was out in the open. I’m shooting back, and they’re ‘snap snap’ going. Ain’t nothing touching me.I could feel it,” Tanto said. “You could just feel a warm force-field — it’s really a cocoon around you, like ‘I’m good. Nobody’s going to hit me.’”

Though the defense was never intended to be a part of the contractors’ job, and the attack resulted in the deaths of two of the contractors, Tyrone Woods and Glen Doherty, and both Tanto and Oz were injured, Tanto said that they believe God had them all there for a reason.

“We were all supposed to go home the week prior,” he said. “But, [then we] wouldn’t have had that team there that we had that night. Because of the age, seniority and experience, we actually worked well together. I think if that team wouldn’t have been there as it was, there would have been a lot more casualties.”

Oz said he believes God is the reason that the men, who made it out, are now able to share that story with others, including through the blockbuster movie, and that God protected them that night.

“There were three 80 mm mortars, and they have a kill radius of 21 feet. So that basically means, anything within 21 feet has like a 99 percent chance of getting killed,” he said. “I was within 15 feet of three of them, and I lived. I know that His presence was there with me, and it’s what got me through.”

The soldiers’ faith is briefly touched on in the movie, when Pablo Schriebe, the actor who plays Tanto, says he has faith that God will protect him during the attack. Tanto expressed his gratitude that mention of faith made it into the blockbuster movie.

“God is not a PC subject nowadays. With Michael [Bay] getting portions of that in the movie where Pablo is saying: ‘As long as I’m going right with God, He’ll take care of me.’ I said that,” he said. “Him [Bay] putting it into a movie this size, even that little bit that makes me really happy. I’ve had so many people come to me and say, ‘Thank you for putting God in the movie.’ Even that little bit, even that one word.”

However, it’s worth noting that a New Age line to “all the god’s within us” get’s referenced more times than the faith of the Christian soldiers portrayed. A disappointing choice that doesn’t reflect the message of the movie, nor their target audience.

In spite of all the challenges the men endured, Tanto said he believes the faith in God is what helped them persevere and make it through.

“We had so many times we could have quit and because of our faith in God and our faith in each other, we didn’t,” Tanto said.

He continued that he hopes those who see the movie, read the book on which it was based, “13 Hours: The Inside Account of What Really Happened in Benghazi,” or hear the story will come away feeling inspired.

“That’s what I hope that people get, especially when I speak to faith-based groups,” Tanto said. “Have faith in God that He will help you overcome any obstacle. Have faith that you’re in a situation that whether it’s good or bad, you’re there for a reason and keep your faith in Him.”

13 HOURS: THE SECRET SOLDIERS OF BENGHAZI is a call to restore patriotism and common sense to our nation, but the negative content and the mixed belief systems of the characters in the movie portraying the heroes demand extreme caution for viewers.
– Source: The Christian Post, 1/15/16.