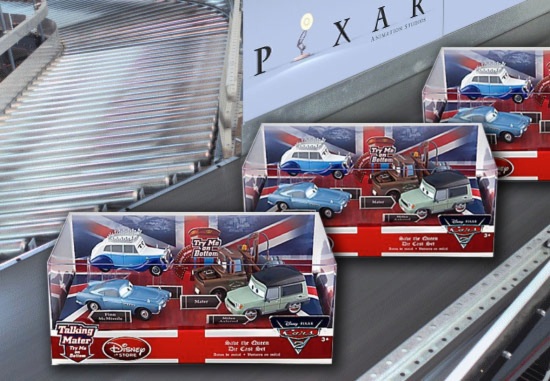 Of Pixar’s first ten movies only one, TOY STORY 2, was a sequel and — amazingly — it was probably better than the outstanding, groundbreaking original. Now, Pixar’s last two movies have been sequels, and a prequel to MONSTERS, INC. is scheduled for release in 2013.

Is Pixar losing its creative edge over its competition?

TOY STORY 3 and CARS 2 are both good movies but, as sequels, the main characters are not bold new creations. There’s something very special about seeing a whole new world offered by the geniuses at Pixar every year. The stylistic differences between FINDING NEMO, THE INCREDIBLES, CARS, RATATOUILLE, WALL-E and UP are profound. They are not formula movies. It’s just not the same thing when a familiar world is reworked.

A world without humans, inhabited by cars, is only new once — even if Michael Caine is enjoyable as the new character Finn McMissile. Sadly, turning “Mater” into a bumbling secret agent is a bit like turning Steve Urkel, from FAMILY MATTERS, into an astronaut. It doesn’t really seem to meet Pixar’s high standards (even if the DVD sells well to parents of boys under seven years old). It comes across more as something you’d expect in a Disney direct-to-DVD sequel.

Walt Disney insisted on exploring new animation territory in the formative years of the company that bears his name. Walt believed that originality helped his beloved animation team improve their art and helped the box office bottom line. Even so, under his creative control, Walt Disney Company experienced many years of difficult economic trials and tribulations. Of course, things change.

Pixar’s first sequel, TOY STORY 2, was originally commissioned by Disney as a direct-to-video, 60-minute movie. John Lasseter talked Disney into a full feature movie because he didn’t want the beloved Pixar characters cheapened — not because Pixar envisioned itself as a sequel factory. The result was incredible. TOY STORY 2 added great new characters and made the old ones all the more lovable. This brilliant success may have hurt Pixar in the long run.

Like TOY STORY 2, TOY STORY 3 came into being because of Disney’s influence. Disney actually began the production process on TOY STORY 3, planning to use their own animators during the period when Pixar’s original distribution deal with Disney was set to expire. Disney owned the right to make sequels of the movies Pixar had made up to that point. Pixar didn’t want Disney’s animators playing with their characters. When Disney bought Pixar and put Lasseter in charge, TOY STORY 3’s story was reworked and made by Pixar.

If you’ve ever been to Disney World you should understand the value of sequels. Characters from Disney and Pixar movies become hot-selling clothes, toys and trinkets of all kinds. Buzz Lightyear even has his own ride in Disney World’s Tomorrowland. Sequels help keep a massive merchandizing franchise alive and profitable.

Several popular Disney animated features have had direct-to-DVD sequels made (LITTLE MERMAID, ALADDIN, TARZAN, LION KING, PETER PAN, and others). These sequels are of noticeably lower quality, but they do sell to parents, and they do entertain small children. They generally don’t entertain adults as well as the original. What must be understood about Disney is that the core of their business is to get money from parents making travel, entertainment, clothing, and toy purchase decisions to please their children.

A Pixar movie that boosts profits across the spending spectrum is more valuable to Disney than one that simply does well in theaters.

THE SECRET OF SEQUELS

HARRY POTTER, TWILIGHT, TRANSFORMERS, IRON MAN, PIRATES OF THE CARIBBEAN, INDIANA JONES, STAR WARS, and other popular movies have sequels because, when a movie hits the box-office jackpot, it becomes the closest thing most studios have to brand loyalty. People eat at McDonalds when they drive on vacation because they know what to expect from McDonalds. People who passionately love a popular movie are very likely to pay to see every sequel you can make until you make a real piece of garbage.

Popular television sitcoms die when the writers fail to hold the loyalty of fans. Characters tend to either get boring or ridiculous and child actors grow up.

For most of their existence, Pixar has avoided stale characters by annually offering exciting new creations. Their competition followed standard industry practice and made sequels for SHREK, ICE AGE, HOODWINKED, KUNG FU PANDA, MADAGASCAR, and even OPEN SEASON. You don’t even have to be all that successful to get a sequel. A major expense in computer animation is creating new characters. Using existing characters saves time and money.

Will Pixar take the path of their competition? TOY STORY 3 was far more successful at the box office than UP or RATATOUILLE. Its characters were also much easier to sell in stores. How many children have a Buzz Lightyear toy, and how many have Remy from RATTATOUILLE? In the toy business, new movies are a huge gamble. If a new movie is a hit, you need massive toy inventory to capitalize on audience enthusiasm. If a movie flops, you can get stuck with massive inventory. Sequels are safer

Pixar is a very valuable brand name. Like Apple in the computer industry it has a reputation for being incredibly innovative. Will that reputation last if Mater is sent to save Mars in CARS 3?