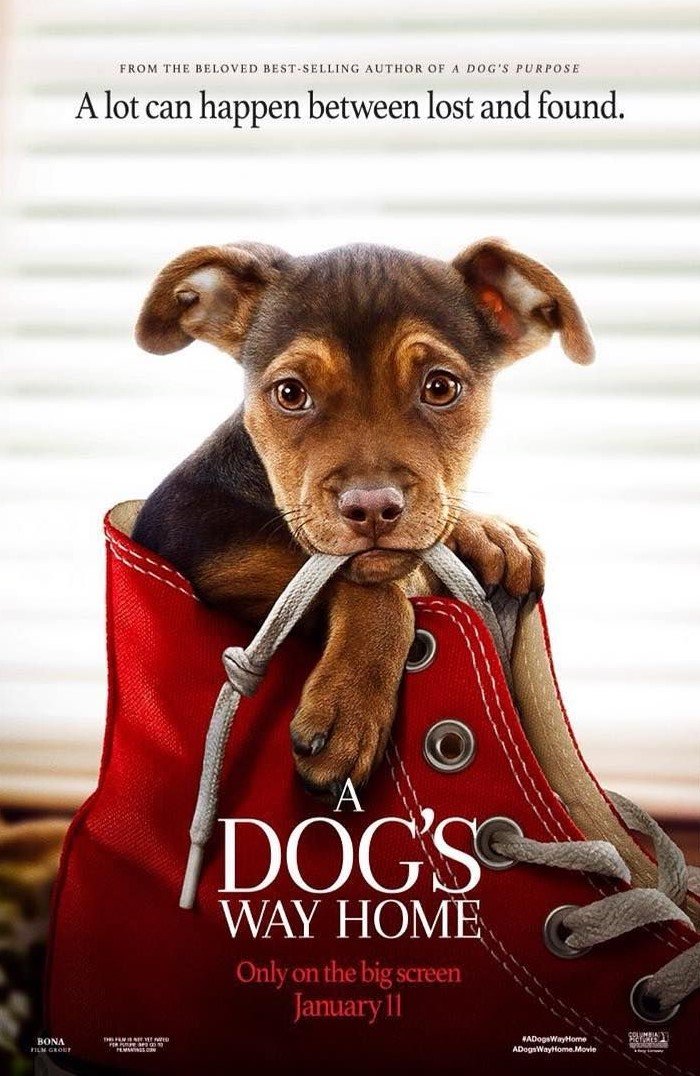 A DOG’S WAY HOME is a family adventure movie. Lucas finds a puppy in a rundown house containing homeless cats and dogs. The house’s owner wants to tear it down, but Lucas protests. Taking the puppy home, Lucas names her Bella, and they become best friends. However, the house-owner is still after Bella. He gets animal control to say that because Bella’s a pit bull, she’s not legal in Denver. Lucas decides to send Bella to his girlfriend’s family, 400 miles away, but Bella escapes, trying to find her way back.

A DOG’S WAY HOME has some heartwarming moments. Overall, it isn’t bad, but it’s not up to par with great dog movies like HOMEWARD BOUND. A DOG’S WAY HOME has a moral worldview about taking care of others, with positive references to family and the military. It suggests Bella has faith in order to make it back to Lucas. The movie tends to ramble, however, and needs more jeopardy. Also, it has some light politically correct elements. Even so, A DOG’S WAY HOME shows the tremendous love animals can offer people.

(B, PP, C, PC, Ho, E, Acap, L, V, A, M):
Dominant Worldview and Other Worldview Content/Elements:
Light moral worldview of taking care of animals and people, animals loving people, people loving animals, positive displays of family and the military, and a redemptive element where the movie suggests that a dog has faith to get back to her owner, mitigated by some light politically correct elements such as one couple is homosexual and a slight environmentalist bent, with some negative anti-capitalist examples of a businessman destroying the homes of animals;
Foul Language:
One light obscenity;
Violence:
Coyotes gang up on dog and fight him, homeless man dies slowly;
Sex:
No sexual content;
Nudity:
No nudity;
Alcohol Use:
Light alcohol use;
Smoking and/or Drug Use and Abuse:
No smoking or drugs; and,
Miscellaneous Immorality:
Lying and deception done by villain.

In A DOG WAY’S HOME, a young man named Lucas finds an adorable puppy, Bella, who needs a home, the two become best friends, but when she runs away from her temporary shelter, Bella must find her way back to Lucas. A DOG’S WAY HOME has a positive and heartwarming moral worldview, slightly marred by some light politically correct elements and a rambling plotline will leave viewers wishing they were watching a classic family movie like HOMEWARD BOUND.

Lucas finds a puppy in the ruins of a house. This little puppy has been feeding from a mommy cat in order to survive. When the owner of the land wants to tear down and clear the land, Lucas puts up a fight, saying this is the home of the cats and dogs that live there. Taking the puppy home, Lucas names her Bella.

Years later, Bella and Lucas become best friends, doing everything together, but the man who owns the land is still after Bella. He gets an animal control official to help him catch Bella. Also, the animal control guy tells Lucas that, since Bella is a pit bull, she’s not legally allowed to be in Denver. Lucas decides to temporarily send Bella with his girlfriend’s family, in a town 400 miles away.

Bella arrives at this new house but just wants to be with Lucas, so she runs away. Will Bella be able to make it in the wild and find her way back to Lucas, traveling 400 miles?

A DOG’S WAY HOME has a light moral worldview. It promotes taking care of others and contains positive conservative references to family and the military. The movie also suggests that the dog, Bella, has faith in order to make it back to Lucas. Some children may be scared from a group of coyotes trying to attack the main dog, Bella. Also, there’s some light politically correct elements. For example, one couple appears to be homosexual, though this situation is treated in a subtle way. Also, the movie has a slight environmentalist bent, with some negative anti-capitalist examples of a businessman destroying the homes of animals.

A DOG’S WAY HOME has some nice heartwarming elements and themes. Overall the movie isn’t bad, but it’s not up to par with MARLEY AND ME, HOMEWARD BOUND, MY DOG SKIP, the classic 1943 movie LASSIE COME HOME, or many other great dog movies. The movie is clearly derived from a book and plays out chronologically. Bella is looking for her home, but the movie passes over years and years of her life in the wild, being sheltered by another family, etc., and it tends to ramble. So, viewers may lose interest after Bella is taken in by yet another home or person. This could have been helped by the inclusion of better jeopardy, which the movie lacks, and better editing. That said, A DOG’S WAY HOME has some really positive, heartwarming elements showing the tremendous love animals and pets can offer people. They are a wonderful part of God’s glorious Creation.